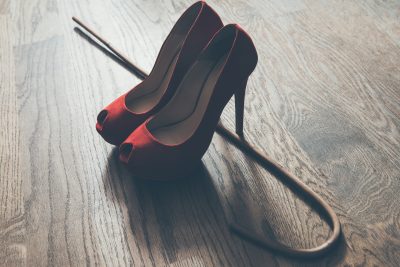 We had been talking for months, but busy schedules, logistics and travel time had kept us from connecting. There is something about anticipation though; the craving, and the build up that makes even the wait enjoyable.

I definitely could not wait to see them.

I had confessed a while back that it had been months and months (and months) since I had been touched by anyone but myself. Not that opportunity hadn’t presented itself, but I wanted more than just a fuck here and there. I was such a hungry little girl. When I told them, I could feel the smile on the other end of the phone.

I thought about them frequently and every time I did my fingers traveled down my body to play.

I barely slept the night before. I was full of that nervous, excited energy. Butterflies fluttered on the inside. As I pulled into their driveway, my breath caught. I was shaky. I kept telling myself they were not strangers, we had an established connection. Limits, desires, kinks had all been talked about repeatedly.  I cared so much about them both, and I couldn’t wait to show just how much. I rang the doorbell. I was greeted with hugs and such warm loving faces.

We laughed together over dinner, at some point the butterflies had disappeared. So when she took my hand in hers and said follow me, I did as she asked.

He had followed in behind, told me to strip down to my bra, panties and stockings, and I did as I was told. Blushing as they both watched me, wondering if they could hear how hard and fast my heart was beating. Miss smiled as she placed a pillow on the floor beside the bed.

“Kneel here little girl” I knelt before her as I had daydreamed about so many times. Her eyes, her voice, her body, everything about her made me not only want her but want to please her. She knelt in front of me briefly, pulling me to her, kissing me so deeply, I was already moaning into her mouth. She fastened a play collar around my neck, kissed my forehead, undressed as I watched and got up on the bed I was kneeling beside.

A hand found my hair and pulled my head back. My eyes now locked with his, it was making me wet. He smiled slightly at me but his eyes said something completely different. He brought his cock just out of reach of my mouth. I wanted it. I wanted it everywhere. I moved towards it began to open my mouth but was stopped by an abrupt slap to my face, followed by a firm “not yet”. It just made me wetter.

“You will not move from here understood?”I tried to nod but he pulled my head back harder.

“Yes Sir” I managed to squeak out in a whisper.

“Mhmm good” he let go of my hair but kept up his gaze. “I think you should see what you’ve been missing out on” He smiled again as what he said registered with me.

“Watch? You just want me to watch?”

He didn’t answer, he brought his cock to my mouth, “Open”

I did as I was told, he wasted no time grabbing my head and thrusting hard in my mouth, I gagged and choked instantly and after just a few strokes he was covered in my spit. He climbed on the bed beside her.

“Put your hands up on the bed where we can see them.”

I sat up further on my knees and placed my hands up on the bed.

I watched as a soft kiss grew deep and hard.

I watched as her hands gripped him.

I watched as his hands traced her body, searchy fingers finding her pussy. He teased at first before sliding fingers inside her. I ached. He fucked her with his fingers, bit down hard on her breast and her gasps and moans spun in my head. I rocked my hips just a little to match his rhythm, but gently, I didn’t want them to see. He pulled his fingers from her, turned to me and shoved them in my mouth. I sucked them like the hungry little girl I was and again he smiled at me.

He whispered something to her, and she flipped over on the bed. Her head down, ass high in the air. She turned her head to look at me.

“Wishing you were me?”  she waited for a response.

He caressed her ass with his hands before he started hitting it hard. I watched the colour of her cheeks change from pink to a bright deep red. Mmmm. I watched then, as he pushed his cock slowly but oh so deeply into her wet pussy. I felt the space then. That empty space between my thighs. How I longed for it to be filled and stretched like hers. He used slow deep strokes, and I imagined how good it must have felt. I rocked a little harder in place now, trying to lift the pillow up between my legs so I could rock against it. It wasn’t working. Faster he went, and so so hard. My hands moved with the bed and every now and then he looked over at me.

“Tell her baby, tell her how it feels” he growled at her.

He nodded at the bed. Miss was now on her back, spread before me. “Her too”, I stood up and my body rushed and I felt the blush come to my cheeks. I moved on to the bed and positioned myself between her legs and kissed gently down her thighs. He took hold of my hair again tightly and pushed my head right down to her dripping pussy. I licked and sucked, lapped at her like a kitten laps up milk, I swallowed every delicious drop of them.

She ran her hands through my hair gently, ‘such a good girl”.

GlassMenagerie has a love and fascination with the written word, and the way it has the power to elicit different feelings in the reader, especially desire.

The last year has been one of self-discovery as she stumbled upon the world of kink, and found the very things she had been craving down in her core, at last, began to make sense.