You are here: Home / Article - anniebear / How to make a Fox Flogger

Dexx took me to New Zealand for a vacation. You can read about our full adventures here. While in town, we arranged a photoshoot with flogger craftsman NZSilverfox (NZSF for short) owner of Fox Floggers. He offered to take me under his wing as his apprentice for the day. Upon arrival, we went straight to his workroom a.k.a “the man cave.”

I swept the floor and he showed us a few examples of flogger handles that were in the works and some finished floggers and dragon tales. His floggers are unique due to the flared handle style and vibrant colors. Typically, he uses concentrated food coloring to dye the wood as that seems to absorb more quickly than regular wood stain.

Next, I stripped down to my skivvies and we began by choosing the wood. He has enough wood for a lifetime of floggers and then some! We went with the leg of a solid wood table his friend was getting rid of. Rather than going in the rubbish bin, it went into his stock of wood-to-be-made-into-naughty-things.

With the wood selected and cut, we measured out the center on each end, and then we were ready to place it in the lathe to carve and shape. For the layman- a lathe is a machine that holds each end of the wood piece and quickly turns it so you can carve and smooth it into the handle. A lathe is typically used to make things like wooden chair and table legs. I really appreciated the way NZSF took into account the grain of the wood, carefully aligning it in such a way as to showcase the most interesting bits. Since we only had a single day to make the flogger, we would be using a beeswax finish-so the grain would be showing through.

We donned safety glasses and NZSF started up the lathe. He gave me an initial demonstration on how to shape the wood using a metal tool.

At this point, I was a bit concerned that I would hurt myself as I’m rather clumsy and assumed I would somehow manage to cut my hand off. This was not to be the case. NZSF was right there with me the whole time as I actually carved a handle by hand! Woodchips and sawdust were flying everywhere. I was astonished at how quickly the shape took place.

After we were satisfied with the initial cut, we had to use sandpaper to smooth out the tiny imperfections making sure not to miss the tiny edges and ends. 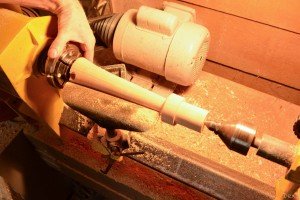 Next came the beeswax finish. The beeswax itself looked like a yellow block of dried wax. I didn’t understand how that was possibly going to finish off the wood. As soon as NZSF rubbed the wax onto the spinning handle on the lathe, the heat from the friction melted the wax slightly creating a fine smooth finish onto the wood. I was handed the wax to finish off the whole handle. At this point I was slightly more confident with the lathe.

Because of the special flared handle design, we needed to cut off a piece at the end on an angle. NZSF always laments that this is his least favorite part because the handle looks so nice and polished.

Then, more beeswax needed to be applied to the exposed wood. I got to use an industrial strength, super hot hair dryer to melt the wax onto the handle.

This process went rather quickly and we soon completed the handle!

Before congratulating myself too much, I realized we then had to hand cut the leather for the actual flogger. NZSF presented multiple pieces of leather and we debated on which color and type to use. He likes to evenly distribute the weight of the handle to the type of leather used on the flogger so it’s not too top or bottom heavy. We chose a thick, brown leather that would compliment the pale color of the beeswax finished handle. Next came the actual cutting. This part made me very nervous because once you make one cut it cannot be undone. I was confident that I would somehow make a grave mistake and we would not only waste an entire piece of leather but also have to start over (I also thought I could probably somehow cut my finger off on this one).

NZSF was not worried in the least. He confidently laid out the hide and cut a rectangle section out. He then taped the ends so it would not slide around and measured out the thin strips along a straight edge. I watched him make the first few cuts and then he handed the blade to me to get to work. This step in the process was probably my least favorite as I was so concerned with making a major mistake. To cut the leather, you have to push the blade really hard. After a few attempts, I let NZSF finish it off.

To attach the leather, NZSF says he never uses any glue. Instead, he rolls the leather around the handle and hammers tacks onto it. He reinforces the other side of the handle with two more tacks. The flogger was almost complete! 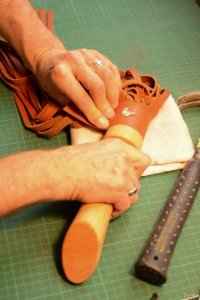 Because we were in New Zealand, NZSF thought it would be fun to add a small detail in the form of a little kiwi bird. So cute! He stamped the bird onto the leather at the base as well as adding his brand onto the inner center of the flogger. The flogger was officially complete! He gave it a test run on my behind to make sure it “worked.” Success!

We had one more flogger to make. NZSF graciously said he wanted us to have one for ourselves. The first flogger is our giveaway this week. NZSF had some premade handles that he let us choose from. Since I had arranged the shoot, Dexx let me pick out the handle I wanted; hot pink it is! (although we could alternatively call it red since that’s more “Domly,” hehe) So all we had to do for this flogger was cut the leather and attach it to the handle. We gave this one a test run on my behind as well. It’s a hard life being a flogger craftsman’s apprentice.

What an amazing day of photography by Dexx and flogger making by NZSF and myself! You can contact NZSF via his FetLife.