Home » How To Connect With A Submissive On FetLife 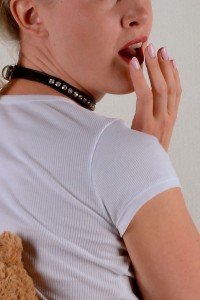 One of the most common questions we get from readers is how to meet fellow like-minded kinky people for play or dating. There are a lot of different answers to this, but in this article I want to cover Fetlife as a way to meet people. This builds on Jenn Masri’s earlier article about >FetLife Etiquette.

While FetLife is intended to be a social network more than a dating or hook up site, people do of course message and meet each other on the site. As a submissive woman, I get a lot of messages from dominant men looking to connect. Based on comparing notes with other submissive women, this is not unusual. So if you want to meet people in this way, it pays to put some thought into how you go about it in order to stand out from the crowd in a positive way and maximize your chance of getting a reply.

There is a misconception that when corresponding online, normal rules, etiquette, and general politeness can be tossed out the window. For FetLife specifically, many assumptions are made due to someone listing themselves as a submissive, bottom, etc. I’m writing from the point of view of a female submissive, but this information can be utilized across all dynamics and orientations because my preferred method of communication is based on mutual respect.

Another point to note is that a lot of female submissives/bottoms receive many many messages, so it’s important to make your message comprehensive enough to garner a response but not to shock someone into ignoring you forever. I think there is a misconception that a crazy, off the wall message will at least get a reaction, but it will be the wrong kind. It’s also best to avoid overly complimentary messages. They show little substance and are also the most commonly received, poorly thought out type of message. Instead, focus on other information you can glean from the submissive’s profile that can indicate that you have actually read it (most people don’t, so this is an easy way to set yourself apart). Maybe they list an interest in pet play or mention they enjoy rope that you share a commonality with or desire to try. Focus on the non-superficial aspects and close with an open-ended question that requires something beyond a yes or no response. Finally, strive to never come across as needy, desperate, or angry. A good friend once told me, “He who loses his cool always loses.” You don’t want to be that weird guy typing angrily at his computer because someone didn’t respond or responded rudely to you.

Let’s start by looking at some examples of what NOT to say. The following are real examples of messages I have received on FetLife. I’ve “cleverly” covered the names and photos to protect the clueless.

This is a common approach used in general – having a quippy subject line to get the receiver to open it, it’s a good tactic but not in this example. This person assumes too much. They believe their Domly Dom message will make me melt into a puddle. On the contrary, it did quite the opposite – this is a total turn off. Yes, I have been brought to my knees by a Dom but not by you, and you now will never have that opportunity.

Instead: This type of talk can be a real turn on but everything has to come in steps and with trust. Had he engaged me like a regular human being, then this type of talk would eventually not be too far off.

No, I’m not particularly interested. If you’re on FetLife for sex, that’s perfectly fine, but there is a proper way to go about meeting other like-minded people, such as respectfully stating your interests. Once again, this is a failure to approach a person as a regular person.

Instead: This falls in the similar vein as the Domly Dom message. A polite introduction followed by an outline of this person’s interests would have been a better approach and much less polarizing. Many people want to find someone right away without any effort, but in order to find quality people, you have to do the legwork.

I recently went out of town.. Prior to my trip, I was reaching out to some local kinksters and joining a few events via RSVP’s. I received this message out of that: 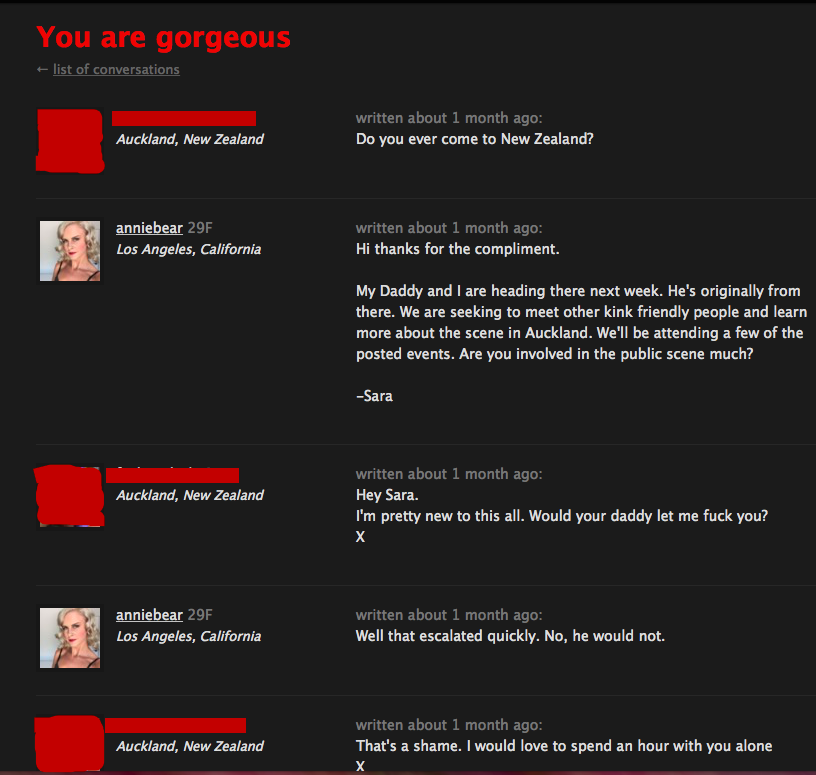 There are a few issues with this message. I kind of took a big risk even responding in the first place as this guy’s profile photo was a picture of his penis in comparison to an air freshener can. In my experience, people with these types of photos as their profile picture are typically on FetLife for hooks ups; you can read more about that in this FetLife Etiquette article. While he did admit that he was new-which would explain the direction the conversation went, to go straight to propositioning me for sex is extremely inappropriate. I had never given any indication that this would be something in which I’d be interested. The funniest part about this situation is while on my trip, I was talking with one of my friends and she specifically mentioned getting a weird message from a guy whose profile photo matched the exact description of this one; it was the same guy! Girls talk and if you give off a weird vibe, word travels fast.

Instead: He could have offered to meet in person or even speak to my Dominant first to see if there would be an interest for this type of play.

Now, there is nothing horrible about this message. However, at the time of writing, his profile was blank and he had no photo. I’ll give more appreciation to someone who has at the very least put forth effort to fill out a profile, even if it’s short. The blank profile photo is understandable as many folks cannot show their face, but put something there. It shows inexperience and laziness to not include an avatar.

Instead: At the very least, have a “filler photo.” I am not a fan of using photos that don’t belong to you, but take a photo of something and post it. Some people will post play toys that they own or lingerie in lieu of a face pic.

Take notice of the time mark between the two messages. This guy hit me up with the “hey beautiful lady” and barely twenty four hours passed before he fired back with this needy, desperate, and not funny response. Remember, tonality is lost in text and online communication, so while you think you may sound funny to yourself, the general “tone” will be lost on your receiver. I also hate to tell you all that his profile photo WAS HIS PENIS BEING COMPARED TO AN AIR FRESHENER CAN! I cannot make this up. I should start a collection of genitals in comparison to inanimate objects album. This just reinforces my theory that genital profile pictures usually belong to people who are creepy and weird.

Instead: I have nothing for this one other than don’t be desperate. Or, if you are in fact desperate then try not to come across that way. Politely pinging someone a second time if they don’t respond is perfectly fine – but give it a few days before circling back.

This message is nonsense. It comes from someone who must be inexperienced, but what does he want from me? He compliments me but then says he prefers to switch but then wants me to submit. I often get messages that say “Hey, you’re beautiful just stopping by to say hi.” This is a very low value message and is crafted in such a way as to not have much of an opening for the sender to be rejected. The sender believes that I’ll swoon over the compliments and respond. It also will usually garner no response from me.

Switching gears a bit, let’s move away from the negative and on to some constructive advice. Here are a few examples of great FetLife messaging techniques. These people deserve gold stars in the vast land of online correspondence. 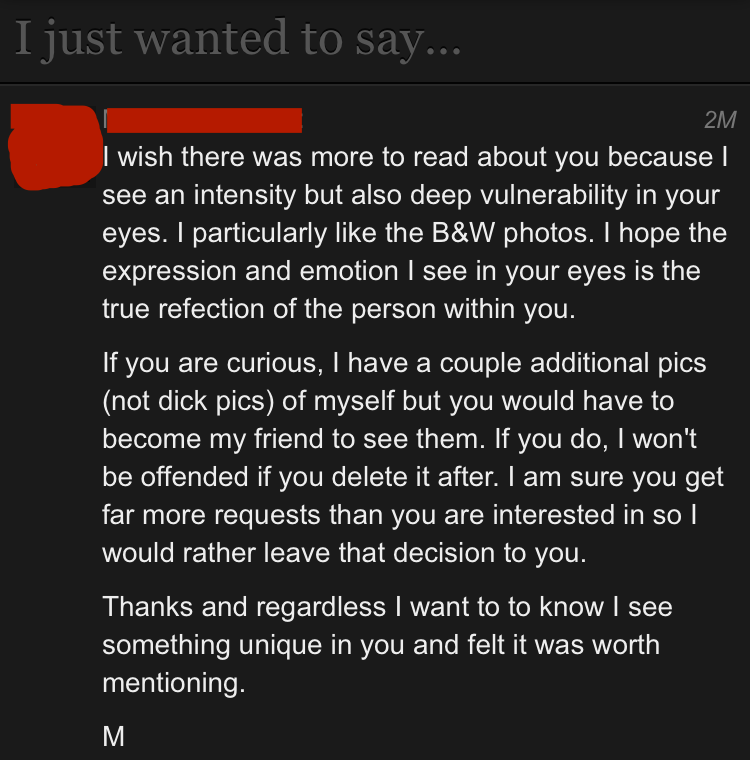 This was a well thought out message. I honestly had a blank profile at the time of this writing, but he took the time to craft a unique message to me that does not completely focus on my looks. I do have a small inkling that he does use this type of message often, but it was well written.

This one was short and to the point. It included a compliment and a specific “action” question regarding seeking partners. 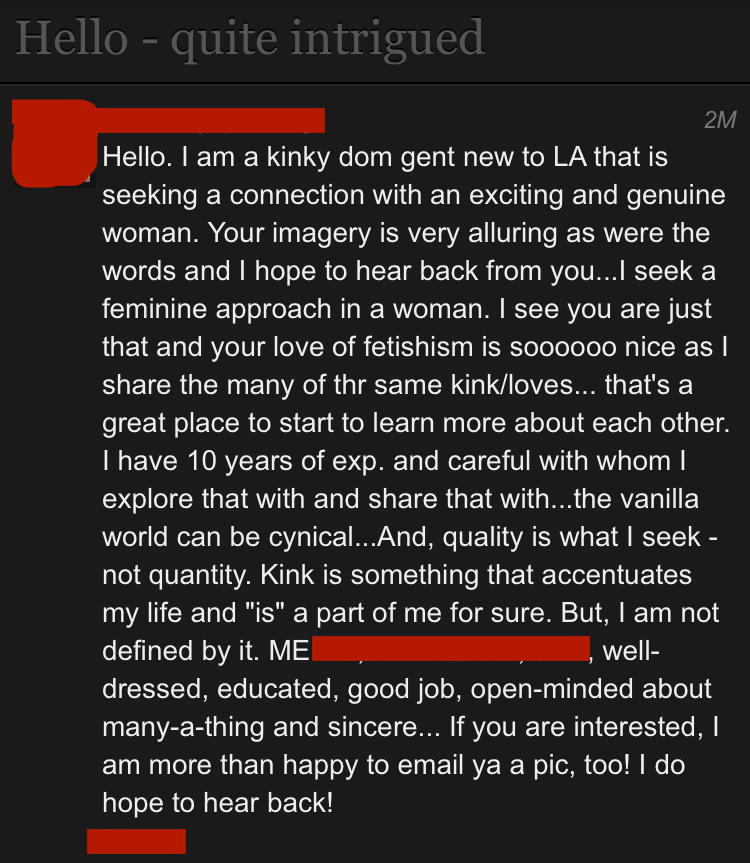 Another well thought out, specific to the receiver message. He also tells me something about himself that is beyond the general and obvious.

I hope these examples help outline some best practices for strong, online correspondence. Let me know about your FetLife messenger stories-I love to hear about the good, the bad, and the ugly. And, if you have had success messaging people on Fet – share your secrets!

Stay tuned for a future article on how to approach a potential submissive/bottom in person!