You are here: Home / Article - Baadmaster / Chastity for Everyone! Part One 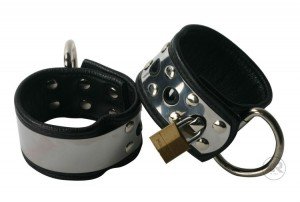 In this brave new Internet world of changing orientations, our old pre-conceptions of what is Dom/me and sub must be re-examined. Lately, with the popular “dominance” of Pro Dommes in our social media, we must take a look at the reasons for their ascendance. And, as with so many social trends, it is fueled in large measure by sex.

Yes, we know that sex per-se is often not on the Pro Domme’s menu. But sex, even in its absence, like the 300 pound gorilla in the room, is still something you cannot ignore. Even with the lack of sexual penetration, a Domme’s arsenal is one that is a “sexual magnifier.” And chastity play is one area where the term “sexual magnifier” is spot on.

Orgasm control has a great history in sexual literature. Eastern spiritual-based teachers of Tantric yoga incorporate orgasm control into their regimens. There is no doubt that holding off on climax can increase its power and intensity when it finally occurs. (“Abstinence makes the heart grow fonder!”) Using a strict definition, many would not consider orgasm control to be chastity play. This might be true; after all, in this type of play you are typically chaste only until the next orgasm – which might only be for a few minutes. But why quibble over time? As I see it, whether you delay release for a minute or a month, you are engaging in chastity play.

To the purists, as I stated before, chastity play really begins when longer term orgasm denial is the centerpiece of the scene. In a good chastity scene, a skilled Dom/me can bring the submissive to the brink of orgasm, without release, for hours. The balance between pleasure, pain and frustration – not to mention some humiliation thrown in – can make for an incredibly powerful scene. This type of play can be extended to multiple scenes over longer periods of time. But, once you get to this area of chastity play, it is only natural to explore the world of chastity devices.

There are both male (“penis prisons,” “cock cages”) and female (“chastity belts”) equipment. These devices can be put on for short or long periods of time.

When a Dominant decides to use a chastity toy on his/her submissive (with the sub’s consent, of course), the Dom/sub implications are intense. This is not “May I cum, Sir?” This is the Master/Mistress preventing access to the slave’s genitals for the purpose of sexual pleasure! This is the real deal. Even if you are not into this type of play, you must admit it is hot. And, if the submissive is required to wear it into the outside world, there is no doubt he/she is submitting big time. Chastity play is pure power and submission in its most sensual form; it cannot be faked – at least not at this level. That is one of the things I admire most about it. Not only is it a “sexual magnifier,” but it is also a “power exchange magnifier.”