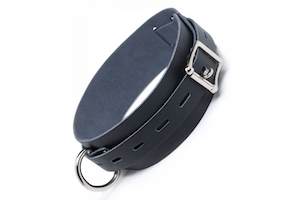 From the Dom/me’s point of view, there is little unanimity in the collar’s significance. There are Doms who give out collars like they are M&Ms. (S&Ms?). On the other extreme, there are those Doms who treat collaring as to be of such transcendent magnitude that they might give out very few in the course of a lifetime. There are those who wait one minute to collar, those who wait one month and those who wait one year. There are some who collar one submissive, while others want multiple subs and collar many. I personally think one should take a cautious tact and treat collaring seriously. But, this is just my opinion. There is no standard for a collar.

I have seen many people hurt when their view of collaring is not on the same page as their partner’s. The most typical problem scenario is the submissive who thinks of collaring as a deep, marriage-like, commitment, who is collared by a Dom/me who thinks of it as being like a club pickup. Or, vice-versa. Both are prescriptions for disaster.
Ultimately, the question must be, “What does a collar signify for you?” This seemingly insignificant query might be the most important you can ask. After all, we can’t standardize the collar’s meaning – no matter how many articles I and my kinkweekly.com colleagues write. Rather than tilt against windmills and try to create a “universal collar protocol,” we should advise people to seek out people with similar views on collaring. Use this as one of your major criteria – rather than overlook it as most people do. Deeply probe the other person’s feeling regarding his/her views on the subject. A submissive who thinks collaring is similar to marriage should seek out a Dom/me who treats it with the same degree of commitment. A Dom/me who takes collaring lightly should seek out a submissive who sees it in a comparable way.
Ultimately, there is no way to predict whether a D/s relationship will work or not. In my current BDSM relationship, my Millennial, New Guard submissive has no innate grasp of what a collar signifies. Thus, I have maintained her as a non-collared submissive and it has worked out for years. In the end, not expecting her to deeply understand what the significance of a collar means to me is one of the great strengths of our relationship. It would be an act, as I see it, of Dom-phoniness to give her a collar which means nothing to her.

Ultimately, if and when you do give or accept a collar, it should have a similar significance to both partners. If you can at least get this aspect right, it will give your union solidity, for as long as it does last.