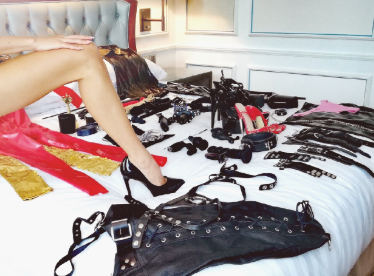 The Domme stated , “ Obviously, I am unable to physically overpower my slave boy. As much as I loom over everyone in my mind, I must admit that I am… well… short.” The question became, does dominance have anything to do with size. Although all things physical factor in as the basis of any D/s relationship, the answer is “no.”

For example, Napoleon was able to dominate a whole world and he was rather small.  Michelle Yeoh, the amazing Chinese female martial artist from the “Crouching Tiger, Hidden Dragon” film series, is very small.  If she wanted to, she could physically dominate just about anyone. As could Jackie Chan, if he so desired. (Master Chan?)

Another Domme chimed in. “But my sub views being overpowered as essential to feeling dominated.” If your submissive is so stuck in his mindset that — even after he is completely dominated by your BDSM skills — he still feels he is missing something because you did not literally overpower him, then there is little you can do. It is much like a man who can only get excited by a six-foot tall blond dressed in an Astronaut’s uniform. If this is the only thing that gets him off, with little wiggle room, then you can talk about it until you are blue in the face; there is not much you can do to change this.