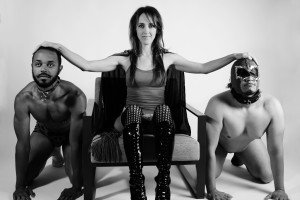 In practice, polyamory is a lot more complicated than a Master/Mistress simply taking a second slave. Reality trumps theory every time. The first reality is that, by any yardstick, poly relationships are the shortest lived of D/s relationships. There are no polls to back up this assertion. But from my first-hand experience in poly relationships and from people I personally know who have been in triads, there is only one conclusion that can be drawn – on the whole, these are very volatile and unstable relationships. They generally have a short shelf life. Now, why is that?

The biggest problem, as I see it, is the “myth of Dominance.” Many Dominants do not accept that there are always limits to their Dominance. Yes, a Master/Mistress can get the slave to obey and serve. But there are limits – even in a TPE (Total Power Exchange – which I will explain in a subsequent article) relationship where very few limits are specified. If you don’t believe there are limits, I offer my patented “bank argument.”

“The BDSM question, “Would you rob a bank if your Master ordered you to?” is usually answered, “Yes, but Master would never ask me to do it.” That is fine in theory. It sounds good. It works great online. But, in reality, ask your slave to rob a bank and the answer will be, “Fuck you, Asshole.” Notice, the word Master was replaced by Asshole. There are always limits to things a slave will do — things the slave will refuse to do even at the peril of destroying the relationship. And once the title “Master” is replaced by “Asshole,” the relationship is usually dead.

Once we admit that there are limits to a Dominant’s power, we must examine how these limits apply to poly relationships. One almost universal limit is that the Dom/Domme cannot alter human nature. It is tempting for a Master/Mistress to think he/she can actually modify the psyche of another person. But there are some resident human actions that are almost impossible to control or change. Two of these virtually unchangeable traits are jealousy and insecurity.

When jealousy/insecurity rears its ugly head, the poly relationship is more than likely starting its downward spiral. The only way to avoid a case of terminal jealousy and insecurity is for the Master/Mistress to be extremely skillful in recognizing when one slave might start resenting his/her attentions toward the other one. The Master/Mistress cannot simply say, “I forbid you to be jealous.” Or, “I order you not to be insecure.” Instead, major people skills are called for here. And very few people have the time, experience or sensitivity to manage two people with separate and often conflicting emotional needs. This is hard work, requiring an abundance of prescience and patience on the part of the Dominant. Even the most skilled Masters/Mistresses might not possess this rare combination of skills. After the first flurry of incredibly sensual and sexual threesome nights, the difficulty of managing two people becomes apparent.

Other realities that intrude on triads are kids, jobs and neighbors. Even a Master/Mistress with two separate slaves in two separate domiciles (as opposed to a formal triad where the three live together) will find that problems arise when one, or more, of the members has children. Kids are very perceptive. And the “close friends” explanation will simply not wash over time. Live-in triads with kids are next to impossible to maintain. Between kids, jobs and nosy neighbors, the triad is under constant attack. Not to mention curious vanilla friends and colleagues at work.

To conquer these real life obstacles, a polyamory relationship must be built on a strong foundation of trust. Trust helps eliminate jealousy. The members must also have a good understanding of the largely hostile world that confronts it on a daily basis. It helps if the two slaves like each other and are friends. It helps if the Master/Mistress really knows the needs of his/her slaves in a very deep and understanding way. And it really helps if you don’t expect the triad to last too long. If it does, consider yourself lucky. If not, just rest assured that many others before you have also tried – and failed. Misery might not always love company. But in this case, it just might help you feel better!