Home » The Punishment Manual – Part I 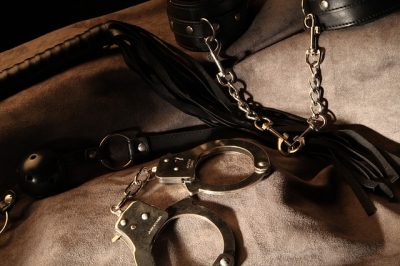 Most D/s articles on the Internet talk about punishment in terms of spanking. “If you do not obey, I will spank you.” But how does this work if the submissive or slave actually likes to be spanked? Here we will catalogue punishments you can actually use in the real time training of a slave/submissive. This will be one of my longest articles. But I wanted to start the year off with as complete a guide to punishment as possible.
First, some basic punishment principles. It is always important to match the punishment to the infraction. Let the punishment fit the crime. When a minor infraction gets a major punishment, you are sending the wrong signal. Try to administer punishment as closely as possible to the time of the violation. In this way the sub/slave will not only be properly and predictably disciplined, but will also respect his/her Dominant. Never let a punishment cause injury. Never, ever use a hard limit as a punishment. And, finally, always start the punishment with a lecture/explanation. (This will be more fully explained in Part II).

There is a debate as to whether punishment sessions should have safe words. In the year 2018, with all these winds of social change, I would say ALWAYS have a safe word for every session. Period.
There is also the question as to whether punishment is necessary in the training of a sub/slave at all. There is no rule that says there must be punishment in a Master/slave or Dom/sub relationship. I can envision a slave so instinctual he/she needs no punishment to serve flawlessly. Surely some subs/slaves can respond perfectly to praise or disapproval alone. Different (flogger) strokes for different folks. But as The Punishment Manual is intended only for those Dom/mes who use punishment as an integral part of their training, the point is moot.
There are two sides to the discipline coin – physical punishment and mental punishment. I have found that a balanced combination of both physical and mental punishment, along with praise, to be the most effective way to train a submissive or slave.
What follows are specific punishments that can be used effectively in the training of a sub/slave. I used many of them myself. Here is Part I – the “Physical Punishments” section.