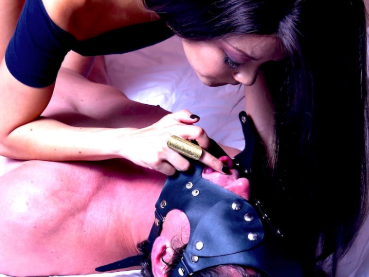 Mistress Eva with sub. Check out more pictures at https://www.youwillpleaseme.com/

One of the most popular — and exciting — features of D/s is the training of a submissive by a Dom/me. Usually this entails the use of both positive and negative reinforcement – the negative side typically being punishment. I had covered the technical aspects of punishment in two previous articles here on kinkweekly.com – The Punishment Manual Part 1 (https://www.kinkweekly.com/article-baadmaster/punishment-manual-part/) and The Punishment Manual Part 2 (https://www.kinkweekly.com/article-baadmaster/punishment-manual-part-ii/ ). But I wanted to address many questions that remained with regards to punishment.

Sir called me over to present myself for inspection. I knew the routine well. After all, he had been training me to do it exactly his way for a month now. And his punishment for getting it wrong – sitting in the corner for an hour – is just too painful to bear. I spread my legs – bare, wearing five inch high heels and no panties as He had instructed – and stood in front of him, eyes cast down. He touched my pussy. He felt it. He put his fingers in it, into “his property” as he called it. I felt a rush of pride until he told me that I hadn’t done an acceptable job shaving my pussy.

He stared at me in silence, then he punished me by slapping my face once. It did not hurt; but it was so humiliating. I do not think I will ever forget to shave to his specifications again.  It was that humiliating.

(Note: if this slave ever had “buyer’s remorse” for the face slapping, you will be glad you have a signed and/or videoed consensuality agreement. It is not ironclad legal insurance, but it sure helps if problems arise.)

In this above case, both punishment and reward were used so that the Dominant could get his slave to do things exactly the way he desired them. The punishment, in this case, did not entail extreme pain. A simple face slap did the trick because this Master understood his submissive well enough to know what she truly hated. Many times a Dominant automatically thinks a spanking or even a caning is the proper punishment. This is not necessarily the case — and surely not for a “painslut” (slang for a submissive who enjoys pain). The best punishment is that which the submissive hates. But the Dominant should never forget reward, either.

Of course, the obverse is true. Reward alone, too, is usually an inefficient training tool.  When a submissive fails in tasks or training, swift punishment is perhaps the only way to call attention to this failure.

The Dominant, much like a parent, should strive to make all punishments consistent.   And they should be administered in a calm manner. The Dom/me who loses his/her temper and punishes out of rage will lose his submissive’s respect. And maybe his submissive too!