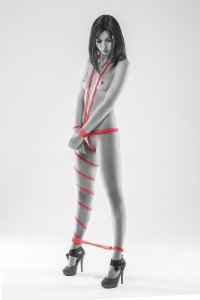 When speaking to relatively new submissives, I have found that many have been introduced to the lifestyle, or at least some of it, via “Fifty Shades.” And with a sequel in the works, chances are many more will be.

Most subs have questions regarding the “slave contract” portion of the movie. Although, in the movie, a contract is offered rather suddenly, with little explanation of exactly what it was (I guess if you have a helicopter, explanations are not required!), the submissives I interviewed wondered exactly what the slave contract procedures – or protocols — are. Time for a little clarification.

The answer is actually quite simple and elegant. To put it into a pithy sound bite, “During negotiations, you can’t ‘Top from the bottom’ because you are not yet his bottom.” Even if you are his play bottom, you are not yet his slave so all bets are off negotiation-wise. At this point, you are two equals negotiating a power exchange. The submissive has not ceded any permanent power to the Dominant. Until negotiations are concluded successfully, no power has been exchanged. Pending signing the slave contract, the submissive is free to be as hard-headed a negotiator as LeBron James’s agent.

Another dilemma concerns the timing of slave contracts. While I am a firm believer in slave contracts (there are sample contracts in a previous Kink Weekly article), I found it a bit odd that the fictional Christian bum-rushed his prospective slave into a permanent one. In my universe, a permanent contract – as opposed to a temporary and/or play contract — is usually presented to a slave well after the D/s relationship has started and negotiations concluded; anywhere from two to six months is most common.

Our last dilemma concerns what to do about a slave contract that bears little resemblance to that which you negotiated. Ideally, after negotiations, the “final” contract should not have any surprises. But if the contract demands things you hadn’t consented to, violates your stated hard limits or bears no correlation to protocols you have previously negotiated, this speaks badly of his skills as a Dominant. In this case, you should simply reconsider signing. After all, a contract must be one that you can honor. Signing a contract that you cannot possibly live up to is a prescription for failure.

On the other hand, if there are a few points in the contract – ones you might have agreed to but now have second thoughts about — you must discuss them. Suffering silently is never a good strategy. A good Master will likely amend it if he feels it is in the interest of the relationship.

Every D/s relationship is different; there are no hard and fast rules. In fact, there is no decree that says the contract must be prepared by the Dominant. I personally know a Master who had his slave write her own deed. Is this “Topping from the bottom?” Maybe, maybe not. But who cares, other than the two people involved? The key is to never let protocol get in the way of communication.