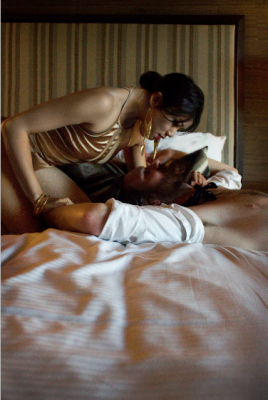 Last week’s article, right here on kinkweekly.com, was about Dom/me dilemmas. One of our readers, bossynblunt, asked, “Can you write a piece like this for s-types?” Sounded like a good idea, so here goes. I will present this in two parts – the first part will discuss slave contracts. This will include the more demanding, edgy and complex “Chastity Contracts.” The second part will offer some of my patented “Tip Lists.”

First, let’s talk about slave contracts. (I have offered some basic slave contracts in a previous article — https://www.kinkweekly.com/article-baadmaster/slave-contracts-v-2017/ ) A contract is usually given to a slave well after the D/s relationship has started; anywhere from three months to a year is most common. So, what happens if the contract has clauses that you simply cannot accept or were not negotiated? Must you be quiet and just live with them simply because you are the submissive? What are your options?

If the contract demands things you never consented to, violates your stated hard limits or bears no correlation to protocols you have previously negotiated, this speaks badly of his/her skills as a Dom/me. In this case, you should simply reconsider signing. After all, a contract must be one that you can honor. Signing a contract that you cannot possibly live up to is a prescription for failure.

On the other hand, even if there are just a few points in the contract that don’t sit well with you, you must discuss them. Suffering silently is never a good strategy. Even if you have to Top a little, at the very least you should know why the clauses are in there. A good Master or Mistress will gladly explain the contract to you; he/she will usually amend it if he feels it is in the interest of the relationship. If there is something you want included or excluded in the contract, you must communicate this to your Master or Mistress.

Communication, unity of purpose and trust are especially critical in more complex D/s agreements such as chastity contracts. Herein the specifics of the length of chastity, the devices used, how often – and how – release is allowed, the responsibilities of both the Key Holder (usually a Domme) and the submissive, and many other details are best clearly stated in a contract. I will offer some “Chastity Contracts” in future articles.

Though “slave contracts” in any form have no legal standing in American courts of law, and can be abrogated at any time by either partner (do not forget this), they do have the force of custom and the clarity of each party’s obligations that make these contracts so valuable – and sexy!

Now for some scening Tips for Submissives:

By requesting a safe word, you are not expressing distrust of the Top.  Many submissives feel that by requesting a safe word (if the Dominant does not mention it), they are stating that they do not trust the Top. Nothing could be further from the truth. The act of submitting shows trust in and of itself; by allowing yourself to be tied up and caned, for example, are you not demonstrating trust of the highest order?  Having a safe word does not alter this assessment. You either trust your Top and play or you don’t trust your Top and don’t play.

If a Dominant says he/she “doesn’t allow a safe word,” pass.  Yes, there are many TPE Master/slave couples who, after awhile, eliminate the safe word within their relationship. But no responsible Dominant will ever say “no safe words” right out of the box. If a Top, when negotiating a first-time scene with you, says, “I never allow a safe word,” be careful. This is a big red flag. In this case, you might say the absence of a safe word says don’t trust the Top — not the other way around!

Don’t think of “safe-ing” as ruining a scene.  There is a common misconception that using a safe word – especially at a play party – is like losing a baseball game. I have heard “I’ve never safed” stated as if it were a badge of honor. Unless you are entering the Masochist Olympics, the safe word was never intended to be a criterion for submission.  The purpose of a safe word is to keep play safe. Duh! If you feel that your limits have been exceeded, for any reason at all, use the safe word!

Don’t assume that using a safe word will ruin a potential relationship.  Another reason I have heard for avoiding “safe-ing” is the fear of ruining a potential relationship by disappointing the Top.  But if you think about it, this is back-asswords reasoning. One of the most important aspects of a BDSM relationship is trust. If you do happen to safe, you are inadvertently testing how trustworthy the Top is. Does he/she stop immediately? Or does he/she ignore your safe word? I am not saying use a safe word to test your potential Dominant – that would be cheesy. But if it does happen, you might stumble on to just one more decisive factor you can use when looking for a potential Dom/Domme.

Better safe than sorry!  If the scene is too much for you, on any level – mentally, physically or metaphysically – use your safe word. Don’t think about any false considerations mentioned in the previous two tips. In fact, don’t think of anything — other than uttering your safe word. For any reason, real or imagined. Even if the scene could have gone on, better safe than sorry. Remember, you can always scene again; safe-ing simply ends the scene – nothing else!

If you are into heavy scening, have a safe signal.  When you scene heavy, you might go into very deep subspace. In this state, you might not be able to utter the safe word. Make sure you pre-arrange a safe signal. In general, you should only heavy scene after you know the Top for a while – after some trust is built up and you know his/her style and skills.

These are just six of the many tips for submissives I will be sharing with you in subsequent articles.