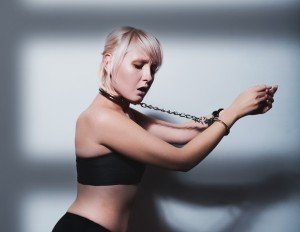 Since there is such a significant psychological component to D/s, there are many triggers that can reinforce the power exchange – whether in a relationship or in a scene. Many of these “triggers” are symbolic. As opposed to a slave contract or a lifestyle collar, these are often temporary symbols of submission. Temporary or not, these symbols can be very effective in raising the intensity of your power exchange. (I will cover “symbols of Dominance” in a future kinkweekly.com article.)

I have assembled a list of symbolic embellishments that can add to your D/s dynamic. You will likely already be familiar with most of them. However, I would bet that you have overlooked at least a couple that could be useful. Obviously, not all of them are for you. But just thinking about symbolic ways that you can add to the D/s hierarchy is an exercise that will keep your union – or play – fresh. That said, the envelope please!

1. Leash and collar. Just walking your sub around on a leash and a collar reinforces the power disparity between the Dom/me and the submissive. The implications are largely symbolic. Most Doms are not going to walk their sub around 24/7 like a dog. (Although some do!) But, if you add this to your weekend arsenal – or just use it occasionally – you will strengthen the D/s aspects of your life. Leash and collar with a naked submissive at a dungeon party can be a great symbol of Dominance and submission.

2. Writing. Just the simple act of writing “slave,” or even “slut,” on your submissive’s body is a powerful symbolic D/s energizer. If you have not done this, give it a try. A marker and a little imagination can work wonders. It is not for everyone. But it is truly a powerful example of “symbolic submission.”

3. Kneeling. Many high protocol Doms require the slaves to kneel almost all the time they are around them. For the rest of us, this is either impractical or it does not float our boat. But even if you are in a “no-protocol” D/s relationship, requiring your sub to kneel occasionally is a powerful display of D/s.

4. Sir or Ma’am. Even if your protocol does not require you to address your Dominant with “Sir,” “Ma’am” or “Master” – or a similar honorific – all the time, you should try to do if for specified occasions. An evening, a weekend or at a bondage party. It might not seem like a lot, but it does add D/s pizzazz (yes, pizzazz) to your situation.

5. Insertables. Being made to wear an insertable in a vanilla situation can be awesome in terms of “symbolic symbolism.” Wearing a butt plug for even a quick foray into a supermarket can awaken ultra-submissive feelings in any sub. As the saying goes, “Try it, you’ll like it.” No underwear carries similar symbolic implications of submission.

6. Greeting ritual. Even if you have no rituals, try using the greeting ritual – where the sub kneels and kisses the Dominant’s feet – at least once in a while. Watch the effect such a simple symbolic act of deference can have on both the Dom/me and the sub!

7. The play collar. This is obvious; it only bears repeating in that you might overlook it. Going to a play party – or just around the house – wearing a collar is symbolic submission at its most basic level. Although recently, many wear it as a fashion statement; if there is a power exchange meaning behind it, it will work like a magic charm.

8. A baby pacifier. This clearly is only for a select few. But, if your submissive is into humiliation play, making him/her wear a baby pacifier can be incredibly effective. Especially in public.

9. Furniture. Requiring a sub become “furniture” for a short period of time is yet another example of “symbolic submission.” Like the baby pacifier, this is not for everyone. But, for those who wish to make a symbolic statement of their power exchange, this is one way to go.