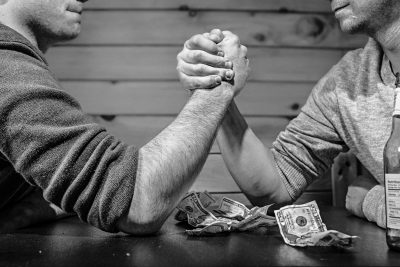 “The famous BDSM question, “Would you walk in front of a bus if your Master ordered you to?” is usually answered, “Yes, but Master would never ask me to do it.”  That is fine in theory.  It sounds good.  It works great online.  But, in reality, ask your slave to walk in front of a bus and the answer will be, “Fuck you, Asshole.”  Notice, the word Master was quickly replaced by Asshole.  There are always limits to things a slave will do — things the slave will refuse to do even at the peril of destroying the relationship.  There is no such thing as total slavery.

Even though the bus question is an extreme example, you can safely say that in any real-time D/s relationship, the word “total” can never be… duh… “total.”  There will always be things a slave cannot or will not do – and things a Master will not ask for. That is what negotiations as to hard limits are for.

Thus, we should think of “Total Power Exchange” as being an idealized goal rather than an attainable one.  As the relationship evolves, and as the trust level increases, more and more power flows to the Dominant. Total Power Exchange is a destination you get closer and closer to, but never arrive at.

Now let’s look at the “power exchange” part of the phrase. As has been stated many times, a Dom/me cannot just take power – power is ceded to him/her by the submissive. Whether for an hour or a lifetime, there is a distinct shift of the power dynamic between the two people. And it is this transfer of power that is at the heart of all D/s relationships. Although I have met couples where the submissive ceded a great deal of power from day one, I have also met those who approached D/s in a more careful, “let’s not rush it,” way.  Once a significant amount of power is exchanged – and you must be the judge of what “significant” is – you are now on your way to a TPE relationship. You can take the “total” out of the equation, but you cannot eliminate the “power exchange” part.  And rituals – which I will cover in subsequent TPE articles – are important parts of any power exchange.

Another, and very unconventional, way of looking at TPE is to ignore the “how close you get to total” aspect of it and concentrate mainly on the 24/7 portion instead.  You might say “total” means “24/7” – a “24/7 Power Exchange.” And you don’t have to live with each other to be 24/7. As far as I am concerned, if the D/s hierarchy is always present, even when you are apart, you can be still be 24/7. This creates a much more measurable and meaningful standard.  When you think about “Total Power Exchange” in this way, it not only makes more sense, it is also more easily attainable.