Home » Who Has the Power 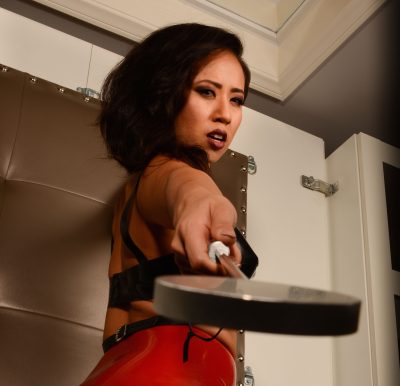 With DomCon Los Angeles coming up this week, I thought it enlightening to examine the basis of all D/s relationships – the “power exchange.” After all, if you are attending, you will see lots of Dommes – from professionals to lifestylers – in their fetish wear. Thus power exchanges will be front and center — in your face, so to speak. And likely a vanilla or newbie friend of yours will say something like, “D/s isn’t real, it is just role play.” Not so fast!

In our world of consensual power exchanges, there is always the argument as to whether there is an actual exchange of power and who, in fact, wields it. Those doubters always use the argument that, “Slavery is illegal in the United States” or, “You cannot legally consent to be someone’s slave.” Those statements might be true in a technical sense; but I always counter with, “If it looks like a duck and quacks like a duck, it’s a duck.” When I see a slave serving his/her Master or Mistress, it appears that they are in a Master/slave state. I haven’t yet seen a slave tell her Mistress “get your own fucking cup of coffee” — as I have with vanilla couples. Until I see Masters/Mistresses and their slaves bickering like vanilla couples, one can only conclude there is definitely an exchange of power.

As to who wields the power, that is a more complex question. I think the actual power exchange is a two stage process. The first one is the negotiation phase, which I have covered in previous Kink Weekly articles. Here, in my opinion, the submissive holds the power. The potential slave has the veto power and is the one generally stating his/her hard limits. This “veto power” is, by its very nature, un-submissive and, from the Dom/me’s point of view, can be a bit unsettling. But, as I have stated, “Until you actually negotiate a D/s agreement, no matter how rudimentary, you are not anyone’s submissive.” But once we get to the next stage – the actual power exchange – the dynamic changes.

After the hard limits and parameters are worked out, the submissive, duh, submits. Now the power is ceded to the Dom/me. The Dominant is given authority over a negotiated range of the submissive’s life – from sexual to lifestyle aspects. The degree of this power varies from couple to couple, but the power is clearly in the hands of the Dom/me. And the power is real.
So, if your vanilla or newbie friend says something like, “D/s isn’t real, it is just role play,” it is time to set them straight. Yes, there are role play aspects in all relationships. But once in a committed D/s union – either by slave contract or any other means – there is definitely a power exchange.