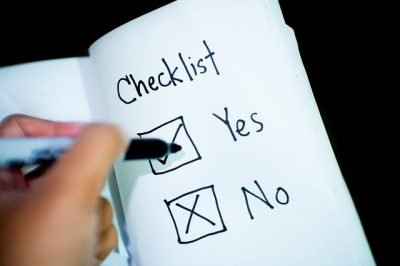 A soft limit is often an activity that you don’t enjoy and wouldn’t normally engage in, but you may consider doing it for the right person. It could be an activity that you feel is too dangerous to participate in, except with a person who has demonstrated expertise in that area. It could be something that both intrigues you and horrifies you, that you would only consider doing with someone you trusted deeply.

Hard limits are absolutes. These are the things that you will not do, under any circumstances. For many people, these may be activities or things which trigger bad memories, panic attacks or other psychological stress. Hard limits can be anything at all, even things that other people consider to be tame or a lot of fun. I’ve met people who have tickling as a hard limit – you or I may not think it’s a big deal, but it is for them and that needs to be respected. You can’t disregard a limit because you don’t think it is important.

Hard limits are considered pretty sacred in kink communities. People who violate hard limits (or soft limits without express permission) are correctly viewed as dangerous players. Not only have they violated consent, but they’ve done the very thing they were told not to do. In most communities, it is enough to get you ostracised.

It is important to recognize that limits aren’t carved in stone. The limits I have now are much different than the limits I had when first starting out in BDSM more than 20 years ago. A few have survived, but not many. In some cases, my understanding of the activity grew, for others, it’s just a matter of changing taste. I’ve added limits in that time too, things I didn’t know were a kink (or that didn’t apply to me then but do now), things that reflect some bad experiences I’ve had in life in general and things I’ve tried in kink that I found I don’t like.

You can choose anything at all for your limits. You can have as many limits as you need. Anyone who shames or teases you for your limits or the amount of them should be avoided as a partner – will they really respect your limits during play? As long as you inform your partners of any changes in your limits, you are free to set them wherever it is comfortable for you.

There are some people who, after developing a deep sense of trust with a partner, may choose to have “no limits”. This is often less discarding limits as it is finding someone whose limits are similar to yours. This is much different than the people who claim no limits to absolute strangers. If you choose to engage in this style of relationship, knowing your partner well is important.

Determining your limits will take some introspection and reflective thought. In the next article, we will discuss 5 methods that you can use to help sort out what your limits are.

Morgan identifies as both a Sadist and a Dominant. She enjoys playing with a variety of people of all orientations/genders/identities. BDSM is an integral part of her personal, romantic relationships. Morgan is both asexual and pan-romantic.Prior to her work as a Professional Dominant, Morgan worked in health care. This has allowed her to gain a more thorough understanding of health and safety concerns in kink. She retired due to an injury that lead to chronic pain and disability. It also drove her interest in medical play, as a way to continue to use the skills she learned in health care and to find comfort in the loss of a much-loved career.Morgan has been active in various forms of activism, including LGBTQIA rights and sex worker rights. She is a strong advocate for equality and the human rights of all people.