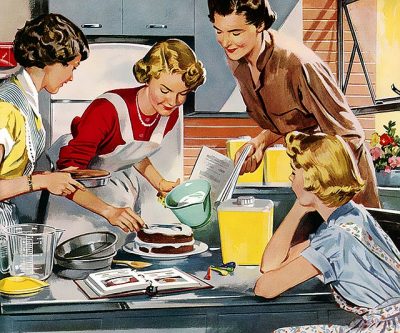 In honor of my 1950’s classes coming up (Jan 22 at Sanctuary and Feb 10 at Threshold) I wanted to write an article that shows the Kink community how one can keep the 1950’s alive no matter what your lifestyle entails, and the positives that go along with 1950’s power exchange dynamics. One might think that a 1950’s dynamic is only possible if you are a heterosexual, married couple due to the Ward and June Cleaver stereotype. I hope I can show you otherwise.

A traditional 1950’s 24/7 M/s or D/s home is usually where the Master/Dom holds all/most of the power, is the main decision maker, and is usually the breadwinner. The sub in this kind of dynamic is usually the homemaker (takes care of the home, family, kids, Master, etc.). However, this structure can be heavily modified to fit the needs of your household.

To many of you this may sound outdated, but hopefully after explaining what you can gain from this kind of dynamic you will begin to think of 1950’s dynamics differently.

There are many benefits to having a 1950’s dynamic and/or implementing some facet of the 1950’s into your life. The first that comes to mind is the structure of the 50’s provides very clear- cut roles and responsibilities for both the Dom and sub.

Another benefit is that one can escape modern society to a certain degree. The 1950’s were about families spending time together, eating dinner together, etc. Family dinners and family outings could be implemented to keep everyone connected to one another. One could also implement protocols that limit technology during these times. All of these things will bring those in the house closer together and help strengthen the bonds between everyone involved.

If you are living in a traditional 1950’s household (where the Dom/Master is the breadwinner and the sub/slave is the homemaker) the Master/Dom (since the sub/slave is taking care of the house, kids, family, etc.) has more time to focus on whatever they wish such as their career, the future, etc. The slave/sub no longer has to worry about having to work and can focus more on hobbies and interests. The slave/sub is essentially free of making big life decisions such as 41 k’s and stocks.

There are three main ways that I know of to keep the 1950’s alive. I’m sure there are more; I am just writing about the ways I am familiar with. Feel free to mix and match these; it’s entirely up to you.

The first is the look of the 1950’s. You can be single or attached to implement this. The look of the 50’s would include everything from 50’s clothes to entertainment to transportation to housewares, etc. It would entail capturing the aesthetic of the era in one way or another.

The second is the feeling of the 1950’s. The 1950’s were thought of as being wholesome, good-natured, and innocent. Men were gentlemen and women were lady-like. Everyone knew their roles and performed their daily tasks to the best of their ability. Handouts were never expected, and people were very appreciative of what they were given including discipline. Many different types of protocols can be used to keep these things present. Below are just a few examples.

The 1950’s were very much about roles. So, whatever your role is in your household, it would be very “1950’s” to define them clearly and be consistent with them.

Polite language protocols could also be implemented to further enforce the feeling of the 1950’s such as always saying “yes, sir” and “yes ma’am” instead of saying “yeah.”

Discipline/spankings were commonplace in the 1950’s. Ads and movies were filled with men spanking women during this time. Spankings were acceptable as long as they weren’t degrading or abusive. Disciplinary spankings could be something you could begin using to add a little 50’s flare to your life.

The third is the relationship style/household structure of the 50’s. This is the “traditional 1950’s” M/s and/or D/s that I was referring to earlier in the article.

Please note, I fully realize that most people cannot live off only one income. I am merely stating the relationship style/household structure that most closely resembles the norm of the 1950’s. This structure can be modified to better suit one’s lifestyle in 2018. It is completely possible for all parties in a household to work full time and still have a 1950’s dynamic to some degree. Many people may only wish to engage in 1950’s roleplay. Some common practices of the 1950’s that would be great for roleplay include heavy petty, bondage, teasing, rubber underwear, and spanking.

There are also three basic relationship types that resemble those of the 1950’s. Again, feel free to mix and match these. These all resemble the traditional structure of the 1950’s in one way or another, but can be applied to any gender, lifestyle, or sexual orientation.

The first is called Taken in Hand. This is where the Head of Household (HoH) holds all/most of the power in the home. The HoH makes their relationship their top priority. The HoH makes decisions only with their submissive’s best interest in mind. The people in this type of dynamic are usually married and monogamous, but these are not pre-requisites.

The second is called 1950’s M/S. This type of dynamic is where the Master holds all/most of the power. In this type of relationship, the Master can make decisions that suit solely their needs, and they do not need to justify their choices to their slave(s). S/M scenes, rituals, contracts, rules, protocols, discipline, and spanking (in a disciplinary and/or kinky way) can be used. The people in this type of dynamic are usually unmarried and non-monogamous, but again these are not pre-requisites.

As one can see, there are so many ways to live a 1950’s-esque lifestyle. I hope this has given readers ideas on how to implement the 1950’s into your home, and the joy it can bring you and everyone in your household. Please feel free to comment and ask questions.