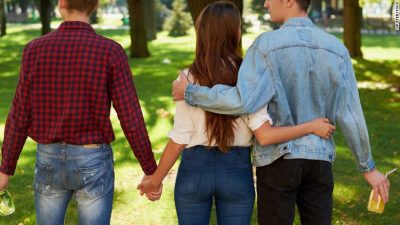 When you’re sitting at home with your heart in your throat and your phone in your hand, you’ve already screwed yourself over: your partner is out with somebody new, and all you’ve planned to do is compulsively check facebook while your jealousy makes you physically ill. It’s one of the worst feelings in the world, and if you’re Poly, you either are or will become intimately familiar with it. In this article, I’m going to talk specifically about jealousy as it relates to people practicing ethical nonmonogamy, otherwise known as polyamory.

Jealousy is one of those emotions that drives archetypal “villain” characters in almost every story, whether it’s the Evil Queen out to get her stepdaughter or an angry ex-lover determined to seek retribution. But in reality, jealousy isn’t exclusive to bad guys…we all feel it from time to time. Mercifully, it’s usually in bite-sized doses. But sometimes, we choke on it.

I never considered myself to be a jealous person, but the first time I saw my girlfriend kissing her other female partner, a twinge of mild annoyance hit me like an involuntary muscle twitch. I didn’t know what it was or why it was happening…I was the most recently integrated partner, after all. I knew about both of my Dominant’s other people, and over the next few months, I would come to genuinely love my metamour in a sincere, ever-evolving fashion. I thought the  jealousy I once felt was starved half-to-death, but I was shocked to discover it lurking in the darker recesses of my heart, very much alive. It came out at weird times, and so I tried to predict it, but it kept not showing up on-schedule. I realized that the jealousy was illogical. There was no external stimuli that could provoke it, although at first I thought there was. The ugly truth settled over me: I wasn’t feeling jealous because my partner/s had done something, I was feeling jealous because I was afraid.

Fear is a powerful motivator, and in my opinion, the root of all jealousy. Because fear is inherently mercurial, my jealousy also felt fickle at the best of times. Once I connected the dots, however, I started to understand how to dismantle my jealousy. Don’t get me wrong…this is still an ongoing battle for me, but it’s one worth fighting because most of the time, I win.

Here are some of the tactics I use when jealousy arises. Hopefully, you’ll find something here that works for you.

Figure out the facts: What’s actually happening right here, right now? I mean, literally make a list of things that are true, not intuited. Compile this fact list because chances are, doing that alone will banish some of your demons.

Realize you are not helpless: Sometimes we convince ourselves that we are powerless in certain situations, but that’s just not true. There is always a choice to be made, and you always have the right to make it. We can’t control every aspect of our lives, but we do have authority over how we behave. Even if it doesn’t feel like much in the moment, that’s saying something.

Admit what you’re afraid of: Oftentimes, the thing we are most terrified of is being abandoned, discarded, or replaced. Loss is attached to some pretty painful emotions, and so it makes sense that most people fear it. Another common poly heartache is managing the division of time between multiple partners, especially if you used to have unlimited access to your lover. Our fears can be based in some pretty harsh realities, but there are still healthy ways to cope with them so that they don’t run your life.

Ask for reassurance: While you should never rely on somebody else to be your all-purpose pacifier when you feel like you aren’t handling your jealousy well, it’s okay to check in with your partner to talk about your fears and what you’re feeling, no matter how irrational you believe your worries to be. Part of living poly is processing tough stuff together. If you aren’t willing to admit out loud that you’re struggling, people are going to make mistakes and feelings are going to get hurt. It’s okay to ask for help. It’s okay to not know why you’re feeling a certain way. Just be honest and gentle, not only with your partner/s, but with yourself.

Know that you are enough: You have been enough since you were born, you are enough right now, and you will always be enough for as long as you live. Nobody can give you that gift: you already have it. It’s not up to your partner to make you believe this is true, and it’s also not within their power to take this away from you. Believe that you are worth it. Know that even if the worst happens and somebody leaves you, you will still be able to lead a life filled with love and joy and great purpose. Breakups are hard, no doubt about that, but they won’t destroy you. Only you can destroy you.

Refocus your energy: Instead of overthinking and fixating on the absence of your partner, fill your life with exciting things that are just for you. Go see a movie, write until your fingers cramp, read a good book, take a long bath, watch a favorite TV show, call a friend, take up a new hobby…whatever it takes to make YOU your main focus instead of your partner and their evening plans.

It’s not about you: The reality is, even in a poly triad where everybody is dating each other, there are three separate relationships going on inside of a fourth mega-relationship. It’s not your burden or your right to monitor somebody else’s relationship. When two people are alone together, it most likely has nothing to do with you. And that’s beautiful, because it gives you the freedom to think about yourself outside of whatever it is they’re doing. Find relief in the fact that you can choose to let it go and move on with your night.

Love is more powerful than fear: I said before that fear is a powerful motivator, but compassion and love are infinitely more powerful. Polyamory by definition means “many loves,” and that’s the real reason that we can triumph in the face of jealousy. No fear will be able to withstand the strength of your love if you choose to call upon it, and through your love, you will start to experience the opposite of jealousy…compersion. You will take joy in your partner/s joy.

At the end of the day, jealousy can feel like a hydra that keeps sprouting new heads, but when you cut it down to size and dissect the fear beneath, it suddenly becomes more manageable. Remember, nobody is immune to jealousy. No matter how intelligent you are, how skilled you are at self-analysis, you will experience jealousy because you are human. Instead of evading it or beating yourself up for feeling it, take out your sword and face it with determination. This is, after all, not a battle between you and your partner/s, but a battle between you and yourself. Polyamory offers demanding challenges like this, but if you face them instead of running away, you will emerge as a stronger, more self-aware individual. The rewards of Poly-love will follow, and they are many. After all, why do you think they call it “poly”?

Eden studied Creative Writing and Theater at one of the many Cal State Universities. She is a self-identified poly queer woman who draws on her experiences as a submissive to talk about various issues and hot-topics in the Kink Community. She hopes that her writings will reach other new people in the scene to let them know they are not alone. If you’d like to contact Eden, please feel free to look her up on Fetlife under the handle little_miss_eden.