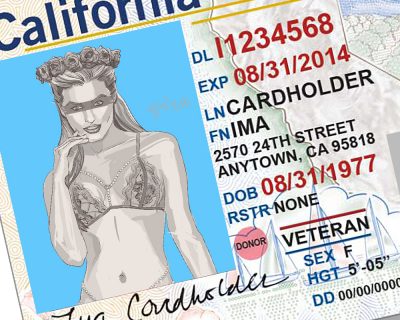 I personally know people who have had their kinky lifestyle brought up negatively in insurance cases, divorce proceedings, and in custody battles. There are copious news stories of people who have lost their jobs because the public discovered their secret lives.

Even if you’re not worried about court cases or job security, you probably don’t want to share your fetishes and sexual proclivities with the general public.

If you’re younger, you might not even be thinking about how important your privacy is, but being lax with your privacy could come back to haunt you later when it does matter.

There’s almost no way to be 100% secure, but there are some steps you can take that will help to keep what you do behind closed doors from being exposed to the public.

My advice is to choose something that’s reasonable and easy to remember. And take it easy on honorifics. You could be Supreme Lord Master of the Universe Bob if you want, but that’s not the sort of mouthful you should be shooting for.

Keep it simple. Why? Because if you’re using something weird, it’s going to be hard to remember, and when you go to set up accounts everywhere it’s going to get flagged quickly.

For the record, my scene name and my real name are the same. I’m about as “out” as you get. You’re welcome to do that too, but realize that I’m not married, I don’t have kids, and I work for myself.

All it takes is about two seconds for someone to save that image to their hard drive. Furthermore, sites that prevent saving images (or apps that only show your content for a few moments and then erase them) are not safe either. There are ways to save anything if it’s available on your screen.

So, pause for a few, brief moments before you share something online and consider the ramifications.

If you’ve chosen a realistic scene name, then it should be no problem to set up new accounts to communicate with people.

I’m amazed by how some people are sharing their intimate sex life in one group and photos of their kids singing in a school play in another group. Don’t make it so easy to connect the dots.

Look out for others too, especially in social media. We’re all in this together.

Photos and videos get more engagement than anything else. They are wonderful and powerful. But in the wrong hands, they can compromise your privacy and be used as a weapon against you.

It goes without saying that you should be careful with who you share your photos and videos with. How many episodes of “Catfish” highlight people who share nude photos with people they have never even met? Just be careful.

One thing that might also help is to cut your head out of the naughty stuff. At least there is some plausible deniability if your mug is not in the shot. You can also use shadows to obscure your features.

Keep in mind that tattoos are just as much of an identifier as your face.

I know one group that retained a lawyer and had the list of names held by the lawyer so that it fell under client confidentiality. I have no idea if that helps protect that information, but it was clever.

Just realize that all it takes is for something to happen at the club, or some overzealous Barney Fife to start digging around for that secret list of real names. It’s highly unlikely, but once again be careful with who you share your information with.

Have you been paying attention to Silicon Valley companies that, in the past, were highly concerned with the privacy of personal data and communication of their users (at least they pretended to be).

Now Microsoft is monitoring your conversations on Skype and ready to censor them, Google is handing over powerful search data to foreign countries, and email has never been safe.

If you want your communication to be locked-down, you should take a good look at the apps you’re using.

One alternative for email is Protonmail which is based in Switzerland and boasts that it is encrypted and subject to strict Swiss privacy laws. You can check it out at https://protonmail.com/.

I don’t want to say that you can’t have fun, that you can’t engage with people online, or sext with them, or whatever. Please enjoy your life as you see fit.

The most important thing is to make an informed evaluation of what you want to keep private and be aware of the risks involved.

Maybe you don’t care if naked photos of you on a Saint Andrew’s Cross were published in “The New York Times.” If not, then don’t worry about it.

But for everyone else, some simple steps can go a long way concerning keeping your private life private.

Do you have any additional ideas on how to protect your identity? Please tell us in the comments below.