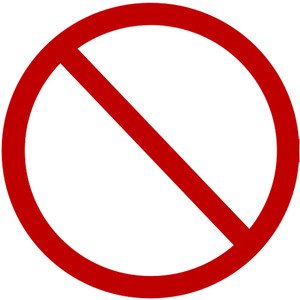 A friend that I have never played with before said yellow in the middle of a scene recently. Like any good player, I stopped and checked in. She told me what was wrong and we fixed it. Done and done, no harm no foul. We continued to play and at the end during our aftercare she apologized for calling yellow during the scene and held me tighter. I was blown away by this and told her never to be sorry for that.

A safe word does not make you weak at all. It makes me know, as a Dom, that you are a safe player who is smart enough to not want to be broken. Safe words were invented so that players could let their partner know that something was wrong during a scene. I am not sure where this whole thing of shaming a safe word came from, but I think it’s foolish for people to succumb to such thinking.

On the other side of the coin a Dom should NEVER take a safe word away from you, especially if you are a newbie. There is a mentality in some circles of, “I have been doing this for years so I know what I am doing. We don’t need a safe word.” Bull shit and RED TO THAT! A Dom you just met will not know anything about playing with you. They will not know anything about emotional triggers or hard limits that you may not have thought about. Doms are not mind readers! No amount of negotiating will prepare you for everything that can happen during play.

Lastly if a Dom makes fun of you or holds it against you for calling a safe word during a scene…. RUN! THAT DOM IS A DICK! (and most likely an unsafe player). In closing to my public service announcement, I will say that safe words are a critical tool to play in any sort of scene. Don’t be afraid to use it because and smart Dom will respect you more for using it when needed. If anyone makes fun of you for using a safe word, they are not worth your time.

So now that my rant is done, what’s your safe word? The best one I have ever heard, because it made the ENTIRE dungeon stop, was “Peanut Butter Jelly Time!” Let us know if you have a better one in the comments.

Follow him on social media as JordanTheComic or here.