Home » Take My Feelings Into Consideration 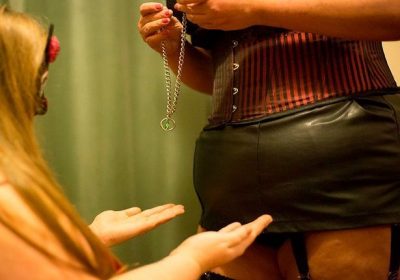 How many times do we see this comment from a sub: “he said he’d take my feelings into consideration…”

NEWSFLASH! Taking your feelings into consideration does NOT mean the dominant is going to do what you want him to do.

He considered your feelings. And he chose to do that which pleased him. Or made the decision that he felt is better overall for all involved and not just the one that appeases your own ego or makes you feel the most comfortable.

When talking with someone who may become your dom, bring this into the discussion.

Ask: “Exactly WHAT do you mean when you say you’ll take my feelings into consideration?” Ask the sticky questions. This is how compatibility is sorted out. This is how parameters of a relationship are sorted out.

I’ll bet he’ll mean he’ll think on it but make the decision he feels best at that time, even if it’s not what you want. That means you’ll have to live with his decision. If you can’t live with an outcome other than the one you want, don’t be the s in a d/s relationship.

Again, I’ll say the answer will be “yes, if that’s what’s best at the moment.”

If you hear something you can’t live with, you have to speak up and say so…and walk away if there is no compromise to be had. I guarantee you the situation will happen and he will do as he said he would do. I see the same thing when it comes to poly. Dom says “I’m poly and will be looking for another sub” and the first sub doesn’t believe he’ll do it. When he does, she cries about it. I’ve literally seen women post in threads that “he said he would but I didn’t believe he’d do it.”

Trust me when I say that he will absolutely go after a second piece of ass and will absolutely make the decision he chooses to make whether you like it or not. If you go into this relationship knowing this is likely to happen and thinking you will be able to change his mind or, worse yet, you don’t believe he’ll actually do it, then you are setting yourself up to be hurt.

I read a question in a group. The sub said her dom had handed her an envelope and told her to hold the money for his friend. He got snippy with her when she asked if it was legit. Is this the kind of thing you can foresee and talk about before you get into the relationship? No.

But think about it. If your dom asked you to hold some money, wouldn’t tell you why or for whom, what do you think you’d do? Is this a moment that is going to end your relationship? Or are you going to do it solely because you don’t want to lose him?

Would you actually hand back the envelope or package and say “fine, I guess we’re through then. Have a nice life.” –?

A lot of chicks say they would, but I think the number who actually would is extremely small. It’s easy to say in a discussion online “totes dump that dude!!!” when they’re not in your living/financial situation.

Fact of the matter is that so many people are so eager to be loved that they’ll do anything in order not to lose the relationship they have. Life is hard by yourself and we’ve been pounded all our lives with this notion that we have to have another person in order to be complete.

So how would you deal with that kind of ultimatum?

People are quick to say no dom should EVAR make a sub do ANYTHING that’s illegal. Facts of life are that it does happen. People are asked to do things that are a bit shady, rather underhanded. We like to think we’re so noble, but we’re just people like any other in that regard. There’s no “higher moral calling” just because we’re kinky.

Then there’s the people shouting about informed consent. You have to know everything! Well, that’s not how the world works either.

Being the submissive means taking some things on faith. Is it risky? Of course. Things worth having take a certain measure of risk.

You have to decide how much risk you are willing to take on.

Only you can decide that.

Read her books on her Amazon page — https://www.amazon.com/TylerRose./e/B00HCPLSP2

You can also find more of her OP/ED work in Fetlife: https://fetlife.com/users/305828