Home » The Quandary of Trust 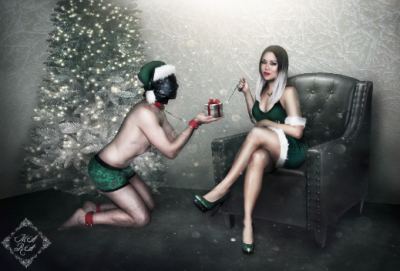 There is a contingent of kinksters who are adamant that one should never play with any top without getting references beforehand. Aside from being impractical when you’re at the dungeon and meeting for the first time, giving the name of someone I’ve played with to a stranger is a complete breach of their privacy and anonymity. I find the very expectation unethical and unreasonable.

I’ve seen people say, in discussion threads and writings, “a good top will give you references!” I don’t think so. I think a good top will not violate the consent and privacy of those they’ve played with just to get into the pants of another person.

No one ever thinks of that. For some reason, people assume that every bottom will be delighted to talk about their experience. Those people demanding references don’t see that it’s unfair to put others into that position and on the spot in that manner.

I’m so adamant about it that “Will you be a reference for me?” isn’t a question I ask. I have not asked a single bottom, out of the many dozens I’ve played with over the years, if they would provide a reference for my kink resume.

The very notion that tops should have references available but bottoms don’t need to is a double standard of epic proportions. Maybe I’d like to ask other tops if the bottom became an unhinged stalker demanding attention for three months after half an hour of spanking. That’d be a really good thing to know, and it has happened.

If someone won’t trust me enough to play without talking to someone else I’ve played with, then we’re not going to play. Period. They can continue to not trust me. I’m not going to do a thing to change their mind.

I wrote a piece some time ago regarding the matter. Some people took exception to my statement “I really don’t care if a person doesn’t trust me.” For some weird reason, not caring that someone doesn’t trust me somehow made me untrustworthy to other people in the thread. I don’t get how they made that leap. I don’t think they do either, so I think I should fully explain my meaning.

Why do I not care that someone doesn’t trust me?

First, because I don’t need the entire world to trust me. A level of distrust in our fellow humans isn’t necessarily a bad thing. I used to bust shoplifters for a living. I was damn good at it too, so I know very well that not everyone is trustworthy. It was made readily apparent by the number of very loud and public consent accusations that popped up around the country (and the world) in the last two years. Well-known educators and party promoters, those whom the most ardent consent advocates named to put on a proposed mythical “high panel for authorizing/judging all dominants” when the mayhem began, fell like dominoes to the guillotine of the court of public opinion.

Not everyone is out to take advantage of a novice the first chance they get; but yeah, don’t trust everyone too easily.

Second, because I don’t need the world’s approval. I got over needing universal approval a very long time ago. While I was married, I wanted and needed the approval of my husband. Now I’m on my own, I only need my own approval. It’s a very freeing thing, to let go the need to be patted on the head and called a “good girl” by the entirety of global society.

Third, because a person’s inability to trust isn’t about me. It’s about them. It’s about their own worries and inexperience, or their past experiences. None of that has anything to do with me. At that point, they probably wouldn’t trust anyone. I’ve given far too many brand new people their  first ever experience to ever take that as a personal affront.

I can talk until I’m blue in the face. If someone isn’t going to trust me not to harm them, then I’m wasting my time and theirs. I don’t go around convincing people to play with me. I don’t prowl the party looking for people to beat on, bugging twenty people until I finally get a yes. They want to or they don’t. Either way is fine with me, and I long ago made a policy of not asking the bottom to play. They ask me to play, and I make them ask me nicely. My policy at once means I cannot be accused of stalking bottoms and badgering them to play.

I don’t know their history, and I don’t want to know. I don’t need to know in order to have half an hour or so of play at a dungeon party.

Did they have a bad experience with someone? They’ll tell me. If so, there likely is nothing I can say or do that will allay their fears and trepidation. They have to get past it themselves. I’m not a therapist. Going into an impact session with hesitation and trepidation isn’t a healthy position in my experience. It lends toward the negative. Better not to play at all until they’re in a better frame of mind.

I can say a thousand times that I err on the side of caution, but the person too afraid to trust won’t hear that. Their inner dialogue is so loud that it blocks out what I’m saying. I can’t change that. Only they can, and that could take months. Or years.

I want to play with someone who is eager to give it a go. Most of the time, they come to me to experience what I do. Sometimes we’ll meet at the munch first and talk about play and implements; but the final decision to play isn’t made until we’re at the dungeon. They still have to decide if they trust me enough to drop their drawers for me.

If someone isn’t able to in that moment, that’s fine. As I said, it’s not about me. Perhaps another day down the road they will. Doesn’t matter if it’s for me or someone else they finally let down their guard. I may never know if they did. We may not ever cross paths again for the rest of our lives. Such is the nature, and size, of the NYC public scene.

Sometimes it’s just newbie nerves. The novice has a thing so hyped up in their head that they’ve completely psyched their own self out about it. A few minutes into the session, when the bottom sees it’s not nearly what they built it up to be, they start to relax and get into it. I strive to be as professional and upfront as possible, almost clinical sometimes. I don’t know if that’s a good thing or a bad thing; but I remember reading once in a horoscope book that Pisces tend to be very clinical about sex and related matters. I do my best to maintain my objectivity, knowing the bottom isn’t likely to.

If someone hesitates over an implement, I don’t use that implement. If they hesitate over “harder” or “not harder”, I opt for “not harder.” Even if they say harder (and I tease them with “remember, you asked for it”), I still don’t strike as hard as I could, especially when I’m using the single tail. I let them make the decision, educating as needed so they’re not making decisions out of ignorance or free-flowing passion.

We each have to assess our own selves and decide what level of risk we’re willing to take.

So…trust or don’t. It’s okay.
Trust the next person…or don’t. That’s okay too.