Home » Turning Around An Awkward Evening 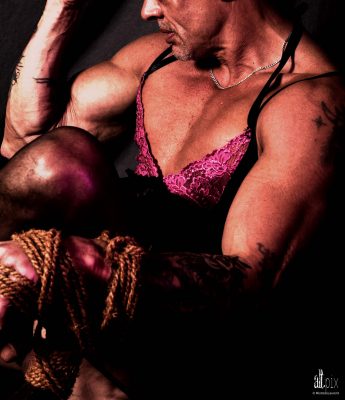 I’m the world’s most socially awkward sadomasochist nympho slut. I freely admit it. I find small talk and mindless chit chat difficult and boring. I don’t go from person to person, trying to make conversation until I finally strike gold. I’m more the “let’s play first, then we’ll talk after the ice is well and truly broken” type. Either that or I engage in a two hour conversation about my work or all things Science Fiction.

There I was at a venue I particularly like, conversing and people watching in the social area, savoring my Scotch and water…and pondering how much time I would give it before deciding I’d rather be at home writing and watching whatever show I was binge watching at the time. This is what every event I go to has to be: More enticing than sitting at home by myself with the television, the book I’m working on, and a pizza. I enjoy my own company and I’ve known my share of parties weren’t interesting enough. I have sometimes left early to be sure I could catch that last train before the weekend shut down.

At one point, I had an emotional moment thinking about a friend who lives in the Carolinas, worrying about them and their family as Hurricane Flo steamrolled over the region. I almost did  change my clothes and go home at that point. Instead, I got a grip on the wave of anxiety and put an end to it, and I stuck it out another half hour.

I’m very glad I did. I ended up having a magnificent evening.

A couple hours into the five hour long party, I was approached by an older gentleman. We talked a bit. He asked if I was there to bottom. I was there to top or bottom, depending on how things turned out. I had toys for both. We sat together and talked some more, doing the mental prep work of the basic “what do you like” stuff.

I’m fairly easy as a bottom so long as the top realizes and accepts that he’s not going to be bossing me around, issuing orders, and that I’m not submitting to him. We’re playing together for mutual pleasure, not exercising a d/s dynamic. In fact, this dominant top did equate bottoming with submitting, so we talked about that. He may have been humoring me, not really changing his view. I may have been talking to the wind for all I knew. At the time, he sounded like he understood how I felt and who I was.

We found a spot, a tall padded bench, but had to wait a moment. There was a rope scene nearby that was winding down, and their bags were around the base of the station we wanted to use. It’s improper to move someone else’s equipment, even just to move it out of the way. If they had been just starting, I’d have gotten a DM to move the bags. Rope scenes tend to be long. But we had plenty of time before the end of the party, so there was no problem waiting a couple minutes. That little bit of time gave me the opportunity to shake off the “YAY, I’M GONNA GET A SPANKING!” giddiness.

After the other couple moved their bags and vacated the area, I found an implement that had fallen under a low table. I took the time to hand it over to a DM rather than leaving it on the table. Someone was saved the “where is it???” panic when unpacking at home. I call that a good thing too, as it’s entirely possible no one else would have seen it. I did only because I wasn’t rushing to get what I wanted.

My dress off, I bent over the bench and we began the warm up phase of our play. I hadn’t been on the receiving end with any consistency for a long time. That meant I was somewhat out of practice, out of condition. Warm up, something of a luxury for me while I was with my second husband, was absolutely necessary for this casual play. I don’t need a lot, just a few minutes. I did have to say “not so hard, please” a couple times until I was able to fully relax and the endorphins started kicking in.

I let him do things I’ve previously not enjoyed, most notably the smacking of open hands to the upper portion of my back. In years past, I’ve had a knee-jerk “NO!” reaction to that kind of impact. This night, it felt really good, sinking into my muscles like a deep tissue massage.

I also received a lovely flogging from the top of my shoulders, around my left side, and down to my bottom, interspersed with bare-handed spanking that went a little lower down my thighs. I hadn’t realized just how much I’d needed a good working over.

He lowered my underpants at some point, a cheeky skulls with roses short pair that I like to wear to spanking events. I shimmied them down to the floor. It was definitely time to have a bare ass. My bottom and back were tingling nicely. I was ready to take it up a notch.

At one point, I turned around to lean backwards over the bench. He’d been trying to slap my tits from below, which felt really awkward from my position. “If you want to do that, how about I take this position?” I said as I turned around. I’m glad I did.

I had to tell him to lighten up at some point. The tendency is to go harder and harder until the bottom reaches a breaking point. I prefer to be in a comfort zone that allows us to keep playing for a long time.

When my tits had had enough, I turned again for another round on my backside. I think we played for a solid hour. He was the one who needed to stop. I had worn him out, and I received one of the best compliments I can hear, as a bottom.

Yes, I do. They underestimate my ability, thinking the old fat chick won’t be able to stand there for more than fifteen minutes. HA! and lulz on them, because I’m accustomed to hour to two hour sex/sm sessions, thanks to back to back husbands who also had stamina. (I’ll tell a sex party story of wearing out several men another time.)

Suffice it to say I went home a very happy, endorphiny camper, and slept very well.

The next day, looking myself over, I actually had bruises! This is nearly unheard of for me. Rhino-hide is a thing and I haz it. I tend to get an overall pinkness to the area struck, but, unfortunately, not much for bruises or other marks. Instead, streaks and stripes will pop out when I take a shower five to ten days later. I’ll turn to look in a mirror and whoops, there they are!, but it’s not the same as watching bruises develop and fade over the course of a week.

I must say I enjoyed the hell outta those bruises for as long as they lasted. I took several update pictures over the course of the first three to four days, and shared them with pride. When the bruises began to fade, spots of fingers and palm could be seen on my right breast. I’d never in my life experienced that.

The joy of an hour of play had resulted in nearly a week’s worth of continued satisfaction. Now if only I could remember his name.

So what is the point of this odd rambling?

I know events can be difficult, especially if you’re new to your local scene. Munches can be long and tedious if you’re not familiar with many people or they seem to be talking among their own little groups of friends. You can actually feel like an outsider when you’ve been a regular at a place for two years. The party can seem long and disappointing if you don’t get to playing within the first hour.

My point is not to give up and head home too soon. Stick it out another half hour and see what happens.

You never know when you’ll meet a person who trips the right triggers and turns a boring, awkward evening into the most terrific night out you’ve had in months.