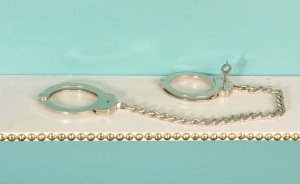 To many the thought of “non-sexual play” seems equivalent to bread without butter…or mac without cheese. Yes, it’s possible but why would you do it? Where’s the pleasure in that, the enticement?

First I need to break down sexual vs. non-sexual the way I will use it for this article. I am going to be very literal. Many people would argue that every scene, all play, is sexual. If it turns you or the other person on, it’s sexual. Well, first of all, not all play is about sexual arousal. However, that is a discussion for another day. For my purpose I am using non-sexual play to mean that no sexual acts are performed during the scene. No “naughty bits” are touched, no kissing, etc. Does this mean there may not be any sensual energy? Of course not. The energy between play partners is not fully connected to the physical acts performed during the scene. If two people are attracted to one another and there is sensual energy (or even sexual energy – because energy is different than physical touch) then there doesn’t need to be sexual play to feel that. It may even increase arousal and desire if there is no sexual physical touch – because it acts as a huge tease in a way. You may be left wanting more and perhaps your play with that partner does in fact, become physically sexual in nature the next time you get together.

However, let’s take this to another level. Two people playing in a non-sexual way who don’t have attraction toward one another, no sexual or sensual energy between them. This scenario can really boggle minds! I will break this down to two different situations. One is where there is still arousal, however, it has nothing to do with the partner and is actually all about the play, or implement(s), that is being used. Someone may get really turned on when they are being hit by a heavy flogger and it wouldn’t matter if the person wielding it was a giant green slimy ogre. So long as the ogre was skilled at using the flogger. The other situation is when the play really doesn’t have anything to do with arousal at all but instead the purpose is perhaps cathartic release, punishment, or maybe for a demo or performance where the mind is focused on how the scene looks and the technical expectation rather than pure enjoyment.

Often I see it where the person who can’t comprehend how non-sexual play could be enjoyable needs to actually experience non-sexual play to finally wrap their minds around it. Often it’s how I described above where they play with a skilled Top who is good at using toys the s-type loves, yet there is no sexual acts as well as no sexual attraction. They enjoy the scene and maybe experience pleasure from the implements, subspace which is a natural high and/or a cathartic release and they finally get it. How non-sexual play can be absolutely amazing and satisfying in its own way!

Have you had a wonderful non-sexual scene? Please share in the comments section below!