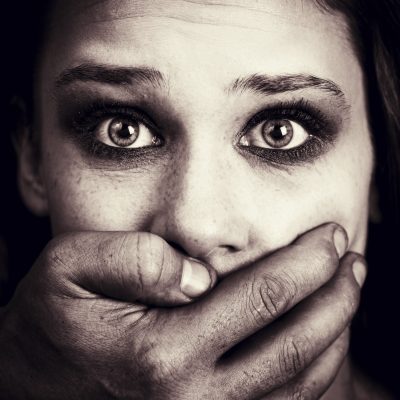 Fear play is not usually something people jump into right away when they’re new to the scene. Although, even if you think you’ve never done any fear play, you might be wrong. Fear play runs on a long spectrum much like most other things. Ever been spanking a bottom again and again and again then suddenly stop and give pause, only to surprise them with one hard smack! That pause, even though it’s subtle, can cause momentary fear in the bottom. Not knowing what will come next – for example putting a blindfold on them – can cause fear. It may be showing them a scary toy, then blindfolding them and, in reality, using something that merely feels like you might be using the “scary” toy but you’re not. As you advance to certain implements, like single tails or dragonstails, or even canes – you may strike it or crack it hard nearby to make them jump. All of these things can be considered fear play. Heck, sometimes just making them think you’ve left them alone on the cross or bench can be a total mind fuck – yet we know that a responsible Top would never actually do this.

Some types of fear play I don’t recommend unless it’s with a trusted and long term partner. One example of this is a story I know of a female Dom with her slave and the slave had a hard limit of breaking his skin. She first showed him a knife then blindfolded him. She’d done non-cutting knife play before so he thought nothing of it. Using a toothpick and warm honey she pretended to “accidentally” cut him. Scared the crap out of him. He didn’t know it wasn’t real until after the scene. People have also used fake versions of real phobias to create fear. For example, if the bottom is arachnophobic (spiders) then using plastic spiders in the scene can cause intense fear. Even if they know they’re fake – it’s based on a phobia which amplifies the emotional response. Making them hold them or placing them on the bottom’s body could be scarier than the whip or staple gun in your hand!

Now, this brings me to an important point. In the case of a real phobia DO NOT, I repeat DO NOT use or do the real thing. Using the example above, never put a real live spider on a bottom who is arachnophobic. If someone is claustrophobic be VERY careful about using sensory deprivation and especially things like hoods or gas masks. Even if something seems harmless to you, these are illogical, yet real, fears. To the bottom this type of extreme fear play can cause traumatic psychological results. Plus they probably won’t ever want to play with you again!

So while fear play can be awesome, remember that there are different levels. Base what you do on the experience and trust you have with your play partner and always do it responsibly. While I appreciate getting new clients in my therapy office, this shouldn’t be the reason!