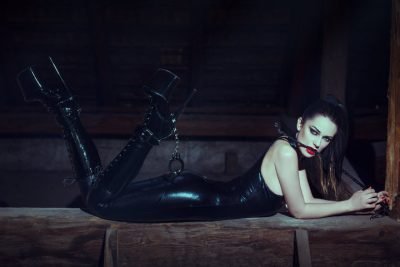 Try it yourself. Tie a strip of cloth in your mouth (or your girl’s) and see how easy it is to work it out, no matter how tightly you tie it. As an added challenge, place a cloth or ball in the mouth first, then tie it in place with a cloth. If it takes you more than 90 seconds to spit it out then I’d argue you have the sort of lantern jaw that takes chunks out of doorways.

Suffice it to say that cleave gags can be fun for photos, videos, or role-playing, but as an actual effective gag you’re much better off utilizing the next gag on the list: the ballgag.

At its most elementary level, a ballgag is simply a rubber ball with a strap or cord through the middle. Once placed in someone’s mouth and secured they can’t push it out, can’t close their mouth, and can’t speak very well. How much speech is muffled depends on the size of the ball in relation to the size of the victim’s mouth. Ideally the ball should pop in such that they can open their mouth only a tiny bit more than the ball itself. But few people in my experience can manage this for more than a few minutes, if at all.

But I’m getting ahead of myself. There are as many types of ballgags as there are restraints (perhaps more) and I could spend an entire column simply going over them. So I’ll just try and hit the highlights.

You can acquire a “beginner ballgag” at your friendly neighborhood WalMart. Start at sporting goods where you’ll find a bag of practice golf balls (essentially tiny Wiffle balls) for a few dollars. Then head over to men’s shoes and pick up some shoelaces (I recommend leather bootlaces). Thread a lace through a ball, place in your girl’s mouth, secure in back and, voilà, she’s ballgagged. With the added advantage that it’s breathable since it’s full of all those holes.

Once you’ve tried that and liked it, you’ll want to upgrade. Sure you could just get a rubber ball and drill a hole through it, but maybe just invest in the real thing. I’d recommend sticking with medical grade silicone, as it doesn’t have a “taste”, and is easy to clean, particularly if it has a removeable latex strap. You can even put it in the dishwasher, which is a good idea if you want to use it with more than a single person.

Of course some people don’t like the thick strap on either side of their mouth. For them there’s what I know as the “European-style” ballgag. You’ll recognize it as, rather than a hole, it has two long appendages coming out of either side to which the strap is then attached. I’ve seen this in both a silicone and rubber version. The former has a disadvantage in that it’s stretchy and easy to push out.

Sizing a ballgag is extremely important, as you want one large enough to be effective, but not so large that it causes agonizing pain.  Most places start out with the one-and-a-half-inch ball and also have a “large”, which is a one-and-three-quarter-inch ball. Then you’ll find places that go up to massive two-and-a-half-inch balls. In general, start small and work your way up.

You can also find padded leather ballgags out there, and some of them are very nice. However they can be difficult, if not impossible, to clean so I’m not a fan.

Next we have panel gags, which has a flat “panel” which goes over the mouth and straps to hold it around and sometimes over the head. Inside the panel is a mouth obstruction of some sort, often a ball but, in the case of one of our personal favorite gags, a short silicone penis.

These can be appealing to those of us raised on the old-style “detective” magazine gags which consisted of a cloth tied over the mouth and tied at the back of the neck. While those were comically ineffective, most panel gags are very effective. And the harness ones look pretty sexy as well.

Before we move onto open mouth gags, a quick detour towards bit gags. Like most gags they look pretty hot and are available in a variety of materials and sizes. All of them are essentially a large stick with is placed into-and-across the mouth, held in place by straps attached to either end, and buckling behind the neck (and sometimes over the head). I don’t quite qualify them as gags as… well… as gags they kind of suck. They don’t muffle speech so much as distort it.

The majority of bit gags I’ve encountered are attached to large rings on either side and are generally intended for pony players of one stripe or another. We’ve got a few in our collection but they don’t get much, if any, use. But I wouldn’t necessarily dismiss them out of hand; it could be your thing.

Next, we have the ultimate in open-mouth gags; the O-ring, dental, or spider-gags. These are designed to keep the mouth open that… things… can be done to a girl which she has no control over stopping (with her explicit consent always, of course). While these are similar to bit gags in that they distort speech moreso than muffle it, I include them in that they do involve a lot of gagging on the part of the girl wearing them.

Just to be certain we’re on the same page here, when the gal’s mouth is forced open by the gag, the assumption is typically is that a gentleman’s penis will be placed in there for her helpless ministrations.

Most are made of metal, although plastic ones do exist; I don’t recommend them. If they break you’ll have sharp edges poking into the inside of the mouth… involuntary blood play! Some, but not all, of the metal ones come wrapped in some form or padding, either thin strips of leather-or-foam, or a rubber coating of tool dip. If they don’t already have it, I’d recommend doing it yourself. The tooth-on-metal contact could well result in tooth chipping or even breakage. Ouch!

As to the different types, the O-ring is the most self-explanatory, as it’s a simple ring of metal in a variety of sizes. It’s been my experience that these are relatively easy to push out, although I suppose a large enough one wedged into someone’s mouth would be more difficult to remove… and painful to wear as well.

The spider gag is similar to the O-ring but has two triangular appendages on either side, bent so as to come out of the mouth and around the cheeks, then strapped down. They’re quite a bit more difficult for a girl to push out.

Finally there’s the dental gag. This is a set of two ratcheted-opening clamps connected by crossbars, designed to keep an unconscious patient’s mouth open for dental surgery. With the added strap for security that’s little chance of her closing that mouth until you’re ready.

The final gag I’ll cover is the inflatable pump gag, an advanced play toy if ever there was one (never mind because even the cheap ones are expensive). This is a panel-type gag which has an inflatable latex balloon on the inside, and  a hose attached outside to one of those tiny hand bladders on the end of a blood pressure cuff. Simply put, you strap it onto girl, then pump it up until her mouth is entirely filled.

As I’m certain you can see, the potential danger is that the inflatable balloon can easily exceed the capacity of the mouth to accept it. Gagging and choking is a real danger. I honestly can’t recommend this gag unless both partners really know what they’re doing. Even then let your girl do try first by herself, untied. Because, let’s say it again, “Vomiting when your mouth is full of gag is hazardous to your life”.

I could go on-and-on about dozens of other types of gags, and even share some amusing anecdotes resulting from intentionally misunderstood gagtalk, but you don’t want to read all that. Get out there and gag your girl! You’ll both be glad you did.