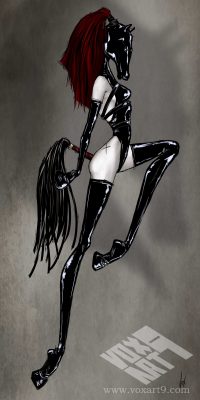 I have noticed there are a lot of new individuals in the community that seem to be unclear about what a D type really is. A lot of these individuals are also unaware of the responsibilities that come with being any rendition of a D type.

Being a Dominant entails so much more than just telling people what to do and getting your fantasies met by doing so.

Sure, Doms can consensually tell others what to do, and in doing so get their needs and wants met. However, there is so much a Dom must consider before making a demand.

First, the s type’s hard limits must be considered as well as their soft limits. It would go against the job description of any Dom to do anything that would actually physically or mentally harm the s type. The Dom must always keep the sub safe.

Second, what the s type can realistically handle and can physically/mentally do should be considered as well. The Dom should NEVER set the sub up to purposefully fail  (unless this has been pre-negotiated and consented to). Now, the Dom can ask for things that might be trying and/or challenging for the sub (again as long as it is consensual and no hard limits are crossed). However, if the Dom knows that what is being asked has no chance of being successful, then I would highly recommend not asking for said thing. Furthermore, if what you wish to ask for is very important to you, you could potentially train the sub on what they cannot do at this time (in hopes that they can perform the task or fulfill the order in the future). Please note, that there are some things that cannot be trained and other things that can. It’s the Dom’s job to gather enough information to know the difference.

It’s also important to not get upset and/or angry at where the s type is currently. It’s always more beneficial to accept the s type, and proactively and practically work with them to help them serve you better. It’s totally acceptable to correct the s type’s behavior, but be careful not to correct who they are. This could negatively affect their self esteem.

If you find that you no longer wish to be in a power exchange dynamic with your sub, then that’s your right as well, and the healthiest break up protocols should be followed by all parties (these should be dynamic-specific).

Again, if you choose to stay with your submissive, it’s important to work with them as a team or at least consider them a part of the team even if all parties have agreed that the sub is considered less than the Dominant.

Third, the Dom should always take into account their own mental state and physical state. You may wish to discipline or punish at a particular moment, but realizing you should not punish until you calm down can be a sign of an aware Dom with great self control. Self control is paramount for both D types and s types. It can be your best friend when you want to do something, but realize you are not in the best headspace to do said thing.

I am also not recommending that punishments and/or discipline get thrown to the wayside because you are too angered and/or upset. I am merely suggesting to recognize when you are experiencing negative emotions that could impede your judgment, and then postpone punishment/discipline until you are in a calmer state. For example, you could tell your sub you will have their punishment for them within 24 hours, or  let them know you need five minutes to cool off before talking to them about this, or you could tell them to wait in the corner and think about what they have done until you have calmed down (which would begin the punishment even before you are calm enough to continue talking about the matter). These are just a few options. There are many more to choose from.

Bottom line, the important thing is that you are always fair and just-even when punishing, disciplining, and/or correcting. When emotions are heightened that can put fairness and justice on the back burner. Just like a submissive may have to train on specific skills, so might a Dominant. The difference in training is that the sub has the Dom leading the training, process, and the Dom has to lead their own training (unless the Dom has a D type of their own or a mentor).  Doms are people too, and their emotions need to kept in check just as much as subs.

Often, Doms are role models for their subs. With this being said, it would be in the Dom’s/relationship’s best interest to model the behavior and/or core values they wish the sub to exhibit/live by. I am in no way saying that Dominants should act submissive, or behave exactly like their s types, or have the same behavior protocols. I am merely stating that if a Dominant wants their submissive to be honest, they themselves should be honest.

I have often heard debates on whether or not Doms should apologize to their subs and/or talk to them about their errors.

I am a firm believer that it is the D type’s responsibility to own their error and make necessary modifications as needed. Now do they need to grovel or give a lengthy apology?- NO!

But they at least need to be willing to adjust things so the s type is safe and not put under potentially harmful physical and/or mental strain.

It’s human to have too high or unrealistic expectations. I am sure these things happen in nearly every power exchange relationship. And that’s totally okay. The essential thing for Doms is that you make healthier adjustments as needed. This requires you to be flexible, humble, and caring about your s type’s well-being to some degree.

In short, it’s important to know when to healthily/consensually push, and when to modify. Every situation is different, and a Dom’s task is often to balance challenge and adjustment.

It’s also important for a Dom to carefully observe not only the s type’s words and overt actions, but also their subtler mannerisms such as body language. You can often learn more about what the sub thinks and who they are by paying attention to these things. Doms who note these kinds of things will have more success in knowing when to push and when to pull back.

I have always heard mindfulness talked about from a sub’s and slave’s perspective, but mindfulness is greatly needed for everyone in any kind of dynamic.

The D type wields all or most of the power in a relationship and/or scene. Because of this, it is up to them to set the tone and establish the path the dynamic will be on.

Of course, it is the responsibility of the s type to want to serve and to follow what the D type has prescribed. However, the D type is the leader and creates the overall ambiance of the exchange/relationship.

In closing, D types should be humble, logical, stable, understanding, intelligent, and in tune with their s types (this last point may vary based on whether one is talking about a scene, a power exchange relationship, or pick-up play. Nonetheless, the D type must be in tune with the s type to some degree. The D type cannot act as if the s type isn’t there and their boundaries don’t exist).

I hope this article has helped others gain a better understanding of  D types’ responsibilities.