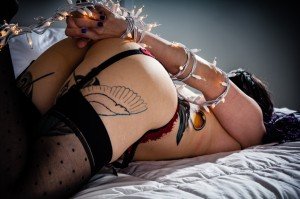 We didn’t get this wonderful submission until after the holiday season but we know it’s never too late or out of season to share a hot story. We hope yuo enjoy this tale form one of our newest contributors HarleyQuinn-Girl!
-anniebear

He was in a bad mood, but he had to make an appearance at the company Christmas party. It would after all be very bad taste for the CEO to ditch the biggest company event of the year. He was so happy he at least had the foresight to get a room so he didn’t have to drive home. He planned on getting drunk to make it through the evening.

It was about time to start the otherwise charming little games that always seem to pop up at these things, but he just couldn’t get excited. Christmas was usually his favorite time of year. Until last year when he came home early on Christmas Eve from a last minute business trip to surprise his wife. But when he walked in the door he followed a trail of clothes up the stairs and down the hallway, ending with his favorite pair of her stockings hanging from their bedroom door handle.

He slowly and quietly pushed the door open to find her on her knees at the foot of their bed, with their newest intern’s cock down her throat. The image was forever burned into his mind, and he blamed that bitch for his awful attitude this year.

He knew Kelly was there somewhere and he prayed he wouldn’t run into her. He would have fired her but he knew some of their biggest clients would have followed with her and he wasn’t going to let her screw him over twice. They agreed to reorganize their job functions so they didn’t have to see each other and she mostly worked in their other office. The asshole kid, however, would never get a job in this city. He made sure of that.

As he sits back and watches everyone have a good time, he doesn’t fail to notice her watching him. He had been watching her too. When she walked in and took her coat off, revealing a very borderline inappropriate red velvet dress that practically looked painted on. When she bent down to pick up the napkin she dropped, conveniently right in front of him, and the bottom of her dress rose up too high. When she danced a little too exuberantly when “Shake It Off” was played. When she licked the salt off of her margarita glass while briefly making eye contact with him.

Samantha had been playing this little game ever since his divorce was final. And as much as he wanted to grab her by the hair, yank her into his office and bend her over his desk, he knew it was a bad idea for the CEO to get mixed up with his secretary. But he still never said a word to her about her behavior. He enjoyed watching her figure out ways to be discretely naughty.

He was so lost in thought he didn’t notice her walking up to him, and when he felt someone staring at him he looked up to find her holding a Christmas present wrapped in shiny bright red paper and a giant green bow.

“I know it’s been a bad year, and I know you’ve decided to ignore my advances. But I think I’ve found a way to make us both happy. Merry Christmas Mr. Steel.”

She hands me the present and without saying another word, turns and walks out of the ballroom. I look down at the gift, then quickly look around to see if anyone was watching the exchange. I let out the breath I was holding when I see that everyone is too busy having a good time and no one seemed to notice.

I slowly untie the ribbon and remove the lid of the box. My breath catches in my throat as I look inside and see my ex-wife’s stockings. I had bought them for her several years ago right before Christmas as kind of a joke. They were green with little red bows on the back thigh area. They really were quite ridiculous, but I’ll never forget the night she first wore them. They immediately became my favorite.

But how did she get these? They can’t be my ex-wife’s actual stockings; she must have found a duplicate pair somehow. It wouldn’t be that hard. But I’d never told another single person about those stockings, let alone her.

As I started to pick them up something else shuffled in the box. It was a hotel room key. What the fuck is going on? The stockings have to be a coincidence. This is just another one of her advances. She’s tired of making them discrete. Well I’m tired of ignoring them. If she wants me, she’s going to get me.

He gets up and heads towards the lobby elevators. He pictures how he will find her when he walks into the room and immediately starts to get hard. He recalls all the memories of this last year as the numbers blink by on his way up. The low cut tops, the strategic bending, the sexual innuendos. He really needs this release and he hopes she knows what she’s in for.

He stands in front of the door for a few moments, wondering if he is making a mistake, but then he slides the key through the reader and walks into the suite. He hears muffled moans coming from the bedroom part of the suite and assumes she’s gotten started without him. But nothing could have prepared him for what was waiting in that room for him.

Kelly’s head snaps up and her eyes widen in shock and horror as she realizes that not only is there someone else in the room, but just who that someone else is. She looks down between her legs and Samantha smiles back at her with the most deliciously evil grin I’ve ever seen.

I don’t know whose more confused, me or Kelly.

Samantha stands up and saunters over to me. She grabs my tie and begins to playfully run her hand over it. Then she uses it like a leash to guide me over to the bed and she lightly pushes me. I stumble back into a sitting position. I’m too dumbfounded to stop her or even speak. And before my mind has a chance to catch up, Samantha starts talking.

“I’m so glad you decided to open my present. I only wish I could have seen the look on your face when you saw those stockings.”

My mind is whirling, I almost feel a little dizzy.

“Kelly and I have recently forged quite the relationship, haven’t we sweetie.”

Kelly glares at her, then tries to speak but the gag prevents her from saying anything understandable. She begins to pull at her arm and leg restraints but nothing budges. Samantha walks over to her, grabs her cheeks and gets right in her face.

“Just relax sweetie, you won’t be here much longer, but you aren’t going anywhere until I’m ready. Do you understand me?”

Her tone is extremely icy and Kelly’s face changes from anger to fear. Samantha turns and looks back at me, her face softening and her tone returns back to its normal sweetness.

“I know it’s been a rough year for you, after what this little tramp put you through. She never deserved you Mr. Steel. And then you were too heartbroken to even move on. Nothing I did could snap you out of your sadness, and Lord knows I tried very, very hard.”

As she speaks she gets down on all fours and starts crawling to me, ass shaking in the air. I’m mesmerized by her, and all I can do is watch and listen.

“I finally realized that what you needed was a good healthy dose of revenge. You walk in on that fucking slut sucking an intern’s cock. Now she’s going to watch you get your cock sucked by your secretary. It’s actually pretty poetic, don’t you think.”

She’s made her way over to me, is on her knees right in front of me, and has begun unbuckling my belt. I just look down at her in complete shock, willing my mind to catch up and react as she pulls my now painfully rock hard cock out of my pants and begins stroking me.

I look up at Kelly and she looks so scared. This has gone far enough. There is no way I’m going to allow this to happen. I grab Samantha by the hair and yank her to her feet as I stand. Her face flashes confusion and then sadness.

I forcefully pull her face close to mine and she winces in pain and panic starts to set in.

“Do you think that forcing her to watch you suck my cock is going to erase all the hurt and anger I’ve felt for the past year?” I scream in her face.

“I’m so sorry Sir,” she stutters. “I…..I just thought I read you differently. I thought this would be perfect. I did it for you. I’m so sorry, please forgive me.”

The way she’s pleading almost makes me feel bad for how I’m reacting….almost.

“Oh, sweet girl. You don’t understand. You may have missed the mark a little, but I’m very, very pleased with what you put into motion here.”

I drag her over and onto the bed.

Her eyes widen, but then her face settles into an evil smile and she starts to peel off her dress.

I bend down eye level with her, give her a giant smile and say, “Merry Chirstmas, I hope you enjoy the show.”

Lynn Quinn identifies mostly as submissive in the world of kink, but has also been exploring her dominant and switch sides. In 2015 she stumbled across Fetlife while searching for an outlet for her kinky desires that were all fantasies up until that point. She has met so many wonderful people that have helped her explore and have guided her towards self acceptance. In her personal life, she loves to write and is excited to merge her passion for writing with her love of kink.