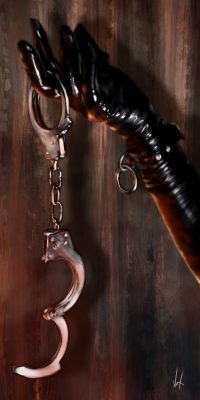 I have been around the block more than once, ok twice now, and in that time, I have had to deal with some major bullshit as a male s-type. Yes, can you imagine that someone would treat a male s-type differently than a female s-type? Say it ain’t so, would you? All kidding aside there is and always will be a major difference in the way the genders are treated when it comes to their submission. Now, I am a male for clarification, but I am going to speak a bit about both sides because of being friends, acquaintances, and play partners with some amazing females that identify as switches, submissives, or slaves.

When I first entered into the community I dealt with all kinds of BS that I frankly didn’t understand, and it really tripped me up a bit. I wondered why I was being treated as inferior or less than others. I kept thinking to myself, “self you are good person who tries to be nice and do right by others. So, why do these people keep treating me like I am less than them. Is it because I identify as a submissive?”

So, I quickly started watching interactions between the genders, and noticed some pretty big differences in how male and female s-types were treated. My first interactions with male D-types were not positive ones for the most part. They wouldn’t even acknowledge I existed at first. No handshake, no eye contact, turning away so I wasn’t in the field of view, and even an attempt at dismissal. Luckily for me, my Domme was not going to deal with that BS, and would call people out on that. Never mess with a fiery red-head in latex and 5 inch stiletto boots, I guess. Now, I won’t say it was all male D-types, but a lot of them. Then, I experienced the posturing female D-type, and couldn’t figure out what was worse the male or the female-they both sucked pretty bad. After a while, I thought, “maybe it was how the community is in Phoenix.”  What I started to notice was that my female counterparts were not getting this type of treatment. Now, this doesn’t mean they weren’t getting treated like this, but from what I saw it was pretty one sided. To me, I identified as an s-type, and they identified as an s-type. So, why was I being treated outwardly so poorly by these D-types?

At this point in my journey, I returned to Los Angeles after being away for 8 years. I was a year and half into my kink journey, and this amazing thing called the internet and AOL had come to show us the way. Stop laughing youngsters. This is how it happened back in the day. So, I got involved in the LA community thinking that people here are a lot more open minded. Well, I was incorrect in that assumption. I ran into the same type of BS that I did in Phoenix. However, the difference was I was told why I was getting shunned. Are you ready for this? It was because any man that would submit to a woman is weak. Huh! WTF does that mean? Now at the time I was with another amazing Domme who was unbelievably skilled and very well liked in the community. She advised me to blow those assholes off. Yet, she was friends with them. I didn’t understand this, and I certainly didn’t think I was weak in any way, shape, or form.

So, one night at a munch I asked a female s-type who I was friendly with if she thought I was weak for submitting to a woman. She said, “Well, I don’t know about weak, but since you let your Domme do anal play with you that seems like kind of a weak or sissy kind of submission.” I stood there with my mouth wide open and mind about to blow up. She then continued with, “I could never be with a man that takes it in the ass because that isn’t very masculine.” Huh! Are you kidding me, once again? So, I asked her, “If your Dom asks you to take it in the ass doesn’t that mean you are weak for doing it?” The response was exactly the kind of BS I kept hearing, “No, because I am a female, and if my Dom wants to do that to me then it is my responsibility to do what he says and likes.” This was a problem for me in a big way and it made no sense.

So, here I was conflicted, angry, confused, and completely dumb-founded. Do people really feel and think this way? Now, on the other side of this there are a huge portion of  Female D-types who love male submissives, and look at them as amazing, strong willed, intelligent, masculine people who choose to submit to a Dominant Female, and that could never be construed as weak. Now, I am not saying that female s-types don’t get treated poorly; I have seen a ton of that and it makes me very sad.

This kind of behavior is very damaging too for the people on the s-side of the slash because we feel like we are giving our best effort to please, and that it is being taken advantage of. I also know that a lot of female s-types are non-consensually sexualized within their dynamics and/or with play partners.The problem with this type of behavior is that if it goes unchecked people begin to believe their bullshit. Trust me, there are a lot of D-types who believe they are superior to s-types, and forget that the s-type chose to submit.

In present time, a lot has changed for the better. I now have male D-types I call friends or acquaintances who respect me and I respect them. Are there still the ones who consider a male s-type weak?  Yes, and I run into them still. They do act a little more stealthy than they used to because they realize that it isn’t the popular mode of thinking anymore, and more and more Female D-types will call them out on that kind of behavior. What I see now as well are female s-types having more of a voice, and standing their ground against misogynistic behavior. Do I believe that female s-types get looked at differently than male s-types? Of course. However, lets not forget, they have their own BS to deal with, and some of it is very scary stuff.

People will always be assholes, narcissists, misogynists, bullies, creepers, etc. Despite this fact of life, we need to look at the fact that we choose these roles that we enjoy based off of feelings and thoughts that draw us towards what seems right to us. For me, I love being a submissive male and I choose this. And No, I am not weak, stupid, wimpy, meager, or docile. I choose to submit to certain people and not to others, which is why I know I am a strong individual because no matter who you think you may be in this world, you have to earn my submission as well as all who choose to be on the s-side of the slash.

If you can take away anything from this, I would say be true to yourself in whatever role you choose- yes, the role you CHOOSE. Remember, if you identify as an s-type your value is very key to these relationships, because without your strength, courage, brains, humor, masculinity/femininity, experience, and intelligence the D-types would be standing around with their floggers attached to their belt loops.