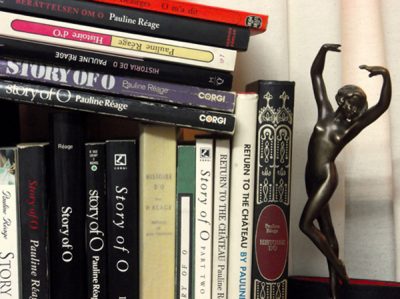 In her poem which begins ‘Even long after my death’ Maria Martins (1900-1973), the vivacious wife of the Brazilian ambassador to the United States who was known to others as simply ‘Maria’ the surrealist sculptor and lover of artist Marcel Duchamp, exclaimed;

Even long after my death
Long after your death
I want to torture you
I want the thought of me
to coil around your body like a serpent of fire…
I want the nostalgia of my presence to paralyze you.

A passion reciprocal is offered here amid ‘sleepless nights’, a legacy wherein a ‘haze’ of ‘desires’ stretches through time until death. We are reminded of Petrarch’s ‘variis terroribus’ and his 14th century poems addressed to Laura, an idealised beloved who is thought to have been the unattainable Laura de Noves, the wife of Count Hugues de Sade (an ancestor of the Marquis de Sade).

Laura de Noves married at the age of 15 (January 16th, 1325) and Petrarch saw her for the first time two years later on April 6th (Good Friday) in 1327 at Easter mass in the church of Sainte-Claire d’Avignon. Falling in love at first sight, Petrarch would be haunted by her beauty for the rest of his life. Already being married she would turn down all advances he made toward her.

Did Laura exist? Fontenelle in his Nouveaux dialogues des morts (1773) re-imagines Laura in conversation with Sapho contemplating the “inexpressibly delightful mixture of pleasure and pain, which is the soul of the amour.”

In a letter Petrarch assured his close friend Bishop Giacomo Colonna, that Laura was indeed a real woman and his love a cruel passion. Her image haunted him by day and by night, at home and out of doors, awake or asleep, even after her demise. The relentless vision of Laura became an illness, a yoke of unbearable chains. Even as the poet sought refuge in the thickest woods Laura’s face seemed to appear in thickets, trunks of trees, fountains, and rocks. “In fact, often in the dead of night,” writes Aldo S Bernardo, “she breaks through the locked doors of his bedroom to claim her slave, causing him unspeakable agony and terror…”

Laura died at the age of 38 in the year 1348, on April 6th, Good Friday, exactly 21 years to the very hour that Petrarch first saw her (as Petrarch noted in his copy of a work by Virgil). Several years after her death, Maurice Sceve, a humanist, visiting Avignon had her tomb opened and discovered inside a lead box. Inside was a medal representing a woman ripping at her heart, and under that, a sonnet by Petrarch;

Here now repose those chaste, those blest remains
Of that most gentle spirit…
O lovely beauteous limbs! O vivid fire,
That even in death hast power to melt the soul!

Before his death in 1374 Petrarch bequested a sum of money to astronomer and horologist Giovanni de Dondi to be exchanged for a ring – a simple ‘O’ ring – “to be worn by him in my memory.” This image, a simple O, was used as a mnemonic device following Petrach’s death, to teach the alphabet in a book about memory, Giovambattista Della Porta’s The Art of Memory.

One is put in mind of another ‘O’, and the rings worn by the protagonists in Story of O, particularly that which is worn by O herself in order that memories of Roissy might sustain her paralysis of subservience. Indeed, Dominique Aury (1907-1998) who hid behind the pseudonym Pauline Réage for forty years, created in Histoire d’O another simple ‘O’ which has become a bequest, a simple (and as it turned out, single) gift which after 60 years still weaves its own haze of desires, and might even be blamed for many of our ‘sleepless nights’, our ‘desiring the impossible’
.
Story of O relates the tale of a young Parisian fashion photographer, called O, and her wilful debasement at the hands of her lover Rene and the members of a clandestine society dedicated to the pleasures of sadomasochism. O is taken by Rene to a chateau ‘Roissy’ on the edge of Paris where she is systematically turned into a slave through sexual assaults, regular whippings, and long hours in solitude. Once back in Paris O is ‘given’ to an Englishman Sir Stephen who has her whipped, branded and pierced. Finally in one of two alternative endings, O chooses death and her demise is granted.

Histoire d’O by Pauline Réage with a foreword by Jean Paulhan, was published in an initial edition of 600 copies by Jean-Jacques Pauvert and appeared in Paris in June 1954. Its publication caused immediate controversy. Pauline Réage, unmasked before her death in 1998, as journalist and translator Dominique Aury, claims the book was nothing more than a love letter to her lover Jean Paulhan, une entreprise de seduction, a way of keeping his interest after an affair of almost two decades. Paulhan, one of France’s most respected literary figures, loved it and had suggested immediate publication. The daring nature of the novel became the talk of the French salons and cafes and there was much speculation as to the true identity of its author. In the following year Histoire d’O won the Prix des Deux Magots, a literary prize generally awarded to new and unconventional books, with a number of famous writers amongst its earlier recipients. The literary quality of Histoire d’O was confirmed and the novel’s notoriety was firmly established. Despite subsequent public outrage and a police investigation involving the interrogation of the publisher Jean-Jacques Pauvert, the book continued to be published, and the identity of Pauline Réage, who, it is said, quelled further police intervention after meeting the Minister of Justice over lunch, remained a well kept secret.

Jean Paulhan inspired Histoire d’O, when he remarked that no woman could ever write a truly erotic novel. Aury decided to try her hand, both as a literary challenge and in the hope that it would rekindle their long-standing affair. John de St Jorre reminds us, ‘She was in her mid-forties at the time, and Paulhan was almost seventy. It was both a private document of their passion and une enterprise de séduction, designed to ensnare—her word—a highly sophisticated man. “What could I do?,” she proffered, “I couldn’t paint, I couldn’t write poetry. What could I do to make him sit up?”

When John de St. Jorre asked Dominique Aury about the second ending in Story of O Aury shrugged her shoulders, admitting, “I didn’t know how to end it…” Seeing that Sir Stephen was about to leave her, O prefers to die, and Sir Stephen gives his consent. “To be killed by the person you love” considered Aury, “seems to me the height of rapture… Hell is everyday life, when you are alone.”

“Isn’t what we call eroticism this vertiginous desire to be swallowed up… the attraction toward Death?” asked Peraldi. “Was not O using Rene and Sir Stephen…” asked Aury, “to achieve the fulfillment of her dreams, in other words her destruction, her death?”

Gregory Stephenson has described Aury’s writing as celebrating, “passionate, obsessional, self-annihilating love.” – “Passion is a serious matter”, Aury pointed out to Jacqueline Domornex, “I find there are worse things than death…”

In November 1960 under the name Dominique Aury (her favoured pseudonym, real name Desclos) Aury allowed publication of several of her poems in the Nouvelle Revue Francaise. “Dreams” invite the reader once again to advance into her night of troubled passion;
We walk on a river bank
Upon a narrow tow-path
On the edge of a new dyke
On the high steps of a dam

And I cry without a cry without a word
For night has reclaimed you
The floods have cut the paths
Ah, might I be carried off in the flotsam

If death in Maria’s poem is offered as a gift, a present of nostalgia, a time regained, then the death which O in Story of O requests and is granted at the end of the story is something a little more problematical. After a giving so all-embracing the result of which is the complete emptying out of the self, – O has become a negation, – O welcomes death as the end result of freedom in slavery.

Does Aury over step the mark? Does she take O’s slavery too far? George Bataille thought Histoire d’O contained “the impossible aspect of eroticism”, in that, “O’s paradox is similar to that of the visionary who dies of not dying…” In one of the few reviews which heralded the publication of Histoire d’O Bataille concluded, “This book reaches beyond the word, breaks out of its own bonds, dispels any fascination for eroticism by revealing the greater fascination exerted by the impossible. What is impossible here is not only death, but total and absolute solitude…” Certainly the mask that was Pauline Réage attained a certain solitude but what mostly comes across from the Aury voice in interview is her passion and deep commitment in loving. And yet the madness of O’s complete giving and ultimate giving up to death, Susan Sontag reminds us, “should not be understood as a by-product of her enslavement to Rene, Sir Stephen, and the other men at Roissy, but as the point of her situation, something she seeks and eventually attains.” This “voluptuous yearning for the extinction of one’s consciousness, for death itself” puts Histoire d’O on a level few books occupy. “What Story of O unfolds is a spiritual paradox,” Susan Sontag maintains, “that of the full void and of the vacuity that is also a plenum. The power of this book lies exactly in the anguish stirred up by the continuing presence of this paradox.”

Readers return again and again to Histoire d’O to share in this paradox, a mystery which invites the reader to experience sexual feelings strong enough to make a person feel he is losing his ‘self’, an invitation perhaps, to desire the impossible.

Stephan hails from Essex, UK, where he was born in 1952. His family were all East End Londoners with a mixture of Irish, Dutch and Jewish blood. He is known for his paintings inspired by Story of O and his comprehensive website. A one time erotica bookseller at the London Fetish Fair, Stephan has exhibited his paintings at EROTICA (Olympia, London), Skin Two Expo (Barbican, London) and fetish clubs and galleries across the UK.