Home » Erotica: You want to be up there, don’t you 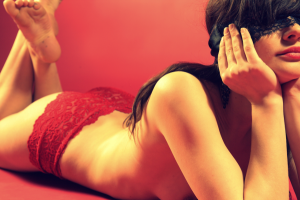 We thought it was a goth club, but it had a back room. It was the winter after my first attempt at college had ended, and I was living back in Los Angeles with my parents. My friend L had come up to visit and we looked for things to do while still under the legal drinking age.

We found what we thought was an 18 and over goth club that played industrial dance music. It was the 1990s. Some of you were probably there.

There was a back room. We saw people lined up and asked what the line was for. “It’s the line for the show,” they responded. So we stood in line.

The back room was long, with a bar in the back, a stage in the front, and rows of chairs between. On the stage, a St. Andrews Cross. When they let us in, we sat down toward the back, on the aisle.

The music was different in there. Sneaker Pimps, Poe, Portishead. Songs and sounds that still trigger these memories to this day.

I’d seen a public scene before. On prom night, we went to another 18 and over club. I wasn’t 18 but I think I could have shown them my library card and they’d have let me in. That was a random scene happening in the middle of the room.

This one had a stage.

We completely forgot about our desire to go dancing. Instead, we watched as the floggers danced upon the backs of willing bottoms. Sometimes female, sometimes male, but always so calm.

I’d seen him. My friend had definitely seen him. He was her type. Long hair, well built, the dark, mysterious aura of him. Not the kind that ever talked to me. When he approached us, I assumed his intentions were with her.

He crouched down in the aisle beside me and contemplated for a moment. My eyes were fixed on the scene.

“You want to be up there, don’t you.” It wasn’t exactly a question, more of an observation.

“Yes,” I responded, without thinking twice.

My friend’s face as I followed this stranger toward the stage was a complex mix of shock, excitement, and curiosity.

We had a brief negotiation where I gave him a little of my background and he asked me some questions. He asked me where my pain tolerance level was on a scale of one to ten.

I was stripped down to my bra and panties and led onto the stage.

Like in so many of these stories, my memories get fuzzy. They’re all stored in the attic of my vacation home in subspace.

I knelt, and he placed his boot-clad foot in front of me.

I kissed it. I could feel the gaze of the audience on me. I could hear some of the men in the front row grunt with approval. I was intoxicated by it.

He pulled me up by the hair and led me to the cross.

I wish I could remember the order things happened in. It wasn’t the only time the long-haired man pulled me from the audience and took me on stage; so the memories overlap and I don’t recall what happened which time.

I remember enjoying the wax.

But I very clearly remember how the scene ended. He’d pulled out a heavy flogger. The thud – that glorious fucking thud – started off softly at first. Dancing on my back and ass and thighs the way I’d watched them dance off others.

Slowly, the intensity grew. It started to land harder, and I went from enjoying the sensation to tolerating it to enduring it.

I didn’t know what he was counting out, I just knew that with every number I was clinging to my desire to endure, to please, to take what he wanted to give me.

When he got to five, I began contemplating if I could take any more.

I can take another.

When he called six, it was all I could do not to say the word, but I held it in as the flogger cracked down on ass.

A moment later, he was right behind me. “Good girl,” he whispered in my ear, fingers caressing my tender flesh. “You’re done.”

There was no audience. There was nobody but him. He led me to a quiet area off to the side of the stage and held me closely. He made me drink water. He crouched down and used his long fingernails to peel the remaining wax off me while I stood, entranced, and a little bit enamored.

One of the other performers came by and made noises that were probably words of encouragement and praise.

It took a long time to come back to reality. I’m not sure it happened for a few hours. I think he knew, because he invited my friend and me to join him and the other performers next door at a late night eatery after the club closed down.

On the drive home, my friend interrogated me about what the experience was like, but all I could think about was what I would wear the following week.