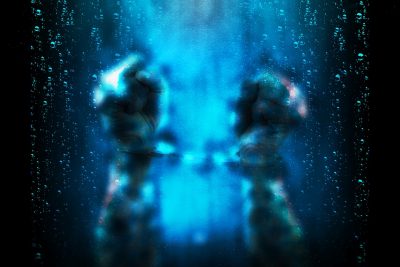 She had wanted his body open…hence the binding only of his hands suspended by rope from the ceiling hard point. Enough tension applied that the balls of his feet still rested on the hardwood floor.

She had left his manhood hanging freely. Free to swing to the rhythm of each strike she planned to administer.

She had debated on whether a blindfold was called for this night. No. Tonight she needed to see the expression from his eyes as his surrender fed the gnawing need she had of him. She grew in strength as a pleading poured forth from his eyes filled with a mixture of fear, pain and love.

He now hung there, his marked skin shining from his own sweat. Deep stripes from her lashes ran across his chest and welts were raising along his thighs and backside from the multiple strikes from her cane. His cheeks… dotted with the drying of crusted tears and tender from the strikes from the palm of her hand. His breathing now stable.

She stepped close and cupped his bruised hanging balls in her hand, tugged and fondled his discolored flaccid shaft with her other. He winced as a small tear escaped from a tear duck down his crusted cheek. There was not enough strength left in him to even hold back that last tear.

She loved him. More than life. The bond between them undeniable. Inescapable. A haunting that had followed them throughout their lives until their paths had finally crossed. Not enough words could describe how he filled her.

“Are you there my love?” She asked as both hands made their way gingerly up his chest and along his throat until they were embracing his face.

After a moments pause he answered, “Yes.” Through swollen lips that had been bitten and abused by her own mouth.

“Good.” She traced his lips with her index finger and licked the dried sweat with her tongue.

Leaning into him she reached up to his left hand and with her right pinky finger wrapped it around his own. The matching red string tattoos touching.

“Mine.” She whispered in his ear.

“Yours.” He managed to whisper back. “Always, Yours.”