Home » Erotica: Master of O, One 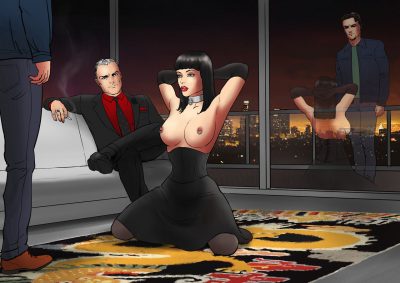 Everything in the enormous hotel bar was bright and blonde: the gleaming veneers of the square, modern furnishings, the pin-spots studding the ceiling, the leather upholstery on the stool where Steven Diamond was parked with his shoulders squared – even the bartender, golden hair spilling down the back of her snug, black uniform jacket. The bar crowned a glass and steel tower so high stray wisps of marine layer drifted by the vast expanse of surrounding windows. The sun had almost dropped into the sub-coastal murk and the streetlights of downtown Los Angeles had begun blinking on far, far below.
Alone at the end of a pale, varnished expanse of wood as long as a bowling lane, Steven surveyed his city in the quiet before the corner office crowd would rush in to drink away the day’s frustrations.
Steven had none. The deposition had gone well. As usual, he’d scheduled it for the end of the day when both the prosecutor and the material witness were eager to get home. It might have cost Steven a billable hour but he was not one to roll the meter. With the retainers he commanded, there was no need.
But then there had been the call from Ray. Ray, Ray, Ray. While his work was as free of frustrations as only that of an extremely competent mercenary can be, his personal life had some stubborn complications. At one time he had resented his younger half brother fiercely, not only for the easier road he’d traveled, but also for the delight he’d brought their mother through what seemed to Steven fairly modest accomplishments. But though he didn’t share Ray’s last name (Raymond Vincenzo, – not a lot of obvious similarity to Steven Diamond), Ray was all that remained of Steven’s bloodline.
Like most confidence men, confidence was the one thing Ray lacked, having never been tested in the world without Steven to pluck him out of its tiger pits and dry wells. He couldn’t help trying to convince others, hoping to convince himself.
Earlier today, he’d been typically insistent on the phone. He had something wonderful for Steven. He couldn’t describe it. Steven had to see for himself. In the first three minutes Steven added up three good reasons to be suspicious. Ray’s wonderful discoveries had often turned out to be expensive in unexpected ways. Some were worth it.
Curiosity alone, inspired by the excitement in Ray’s voice, would have gotten him to the end of that bar. If Ray ended up bringing Steven a problem, he’d just solve it like all the others.
From the paneled offices of Bunker Hill to the marble corridors of city hall to the sweaty, institutional-green antechambers of the 110 Hill Street Courthouse to Men’s Central off Santa Fe, Steven knew every back room where a fix could be put in. If ever a city could appreciate a resourceful criminal attorney, this was it. No one worked the system’s levers more smoothly. For those who could afford him, he was the best legal mechanic in town. And for those who couldn’t, he was occasionally inclined to do a bit of fixing anyway. Sometimes an owed favor was as bankable as a fat cashier’s check.
Morgan, the tall, lean, part-time actress who brought him his club soda with a twist was one of those for whom he had put in a pro bono fix. It was just a simple DUI with no priors and a good bartender in a place frequented by Steven’s clients and competitors was useful. Like so many, Morgan had come out here for the movies and made a few, her athletic frame strategically draped with scraps of animal skins. On camera, she’d usually died heroically, but even the stunt players agreed she could probably have eviscerated most them without spilling a drink. A trim and tanned forty, she still did some theater now and then but had stopped going to open calls.
“You think Sheriff Delgado will resign?” she asked, setting Steven’s drink dead center on the black napkin. Steven swirled the ice cubes and took a swig.
“Not this time. Already indicted and with his friends on the Board of Supervisor’s termed out, he’s finished.”
Steven’s was the smooth baritone of a radio announcer selling something expensive. He’d polished it over many hours persuading judges and juries to believe the patently ridiculous.
On the West Side they gossiped about film stars. Down here the inside talk was politics.
“Even with all he’s got on the D.A.’s office.?”
Morgan had hung onto her tough-girl delivery as well as her taut physique. Steven liked that about her. She was a pretty good saber fencer too, a legacy of her reign as sword-and-sandal queen. The two of them occasionally clanged steel on the planks of The Downtown Athletic Club.
“It’s an election year. Our new mayor will bring in his own tin for the sheriff’s office. Delgado will go quietly to avoid the hospitality of his own jail.”
Morgan glanced toward the host station where Julian, the thin, elegant host, greeted a young couple with impersonal cordiality.
“I think your party has arrived,” Morgan said.
“I hope it turns into a party. Anything involving my brother is suspect.”
“Let me know how it works out.”
Morgan turned to the barback just as Julian led the couple to Steven. Steven stood to greet them, exchanging a back-thumping embrace with the younger man in the blue leather jacket. Steven wasn’t just taller than Ray. The vast span of his back and his tree trunk legs made him seem of an altogether more massive species. Ray had always been a rather delicate boy though with his hipster goatee and his expensive, skinny, blue- tinted shades he remained conveniently ageless. He may not have been a rock star, but he knew how to play one on TV.