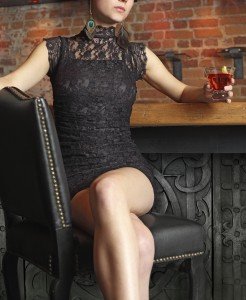 She always sat in the back corner. Who knows what time she had to arrive each night to get that spot? It had the best vantage point of the room. There was no movement on the floor she couldn’t watch.

He’d been watching her for weeks. They’d never made eye contact. Her eyes were always scanning the room, glossing over heads and faces and arms and asses and tits. She watched them all while he watched only her.

His fantasy began after the first night he spotted her. He gave her a name: Michelle. He gave her a background: intelligence officer with the CIA, assigned to monitor the club’s patrons for signs of some of the most notorious criminals. He imagined the types of situations she’d encountered and escaped from using her feminine wiles.

She only drank water. Glass after glass. The waitress didn’t even ask her anymore, just kept the glass filled the whole night. The only time Michelle ever moved was to go use the ladies room; but he imagined it was a cover for a drop with her handler. She had to drink the water so she could have adequate reason for visiting the ladies’ room so often to report on her targets’ nefarious activities.

He was a beer guy. His first night there, he drank two before he went home.

The next night he saw her again and stayed long enough to drink four.

After a few weeks, the waitress didn’t bother asking him for his order. He’d sit down and she’d drop a Stella on the table and wait for his card to open the tab without a word.

He watched as Michelle returned to her table from another drop with her handler. She was wearing a tight black miniskirt tonight. When she crossed and uncrossed her legs he could see the flash of red lace between them.
He stared at her tits as his eyes started losing focus and his mind wandered about what he might find under that splash of red lace…

She stood again. It was too soon for another drop. He sat up and looked in the direction of her gaze. A very tall, very attractive woman was walking toward Michelle’s table. She was wearing high heels and black leather pants, with her hair gathered in a high ponytail.

His mouth gaped open as he saw Michelle kneel before the woman. Right there on the floor in front of everyone! She knelt down and leaned over to kiss the woman’s shoes. The woman looked down on her and smiled. She crossed her arms over her chest and said something.

Michelle sat back up on her knees but stayed on the floor, eyes downcast.

What the the hell was going on?

He watched as the mystery woman spoke and Michelle nodded solemnly.

Suddenly, she raised her gaze and her arm and pointed….directly at him.

The woman turned her head to face him. She arched an eyebrow and looked back at Michelle. With another nod, Michelle dropped her arm and cast her eyes downward again.

He felt his heart racing. What the fuck was going on? Who was that woman? Why did Michelle point at him? What had he gotten himself wrapped up in?

The waitress came by. “Mistress will see you now.”

He did a double take and looked at the empty bottle of beer at his table. Had he been drugged? Was he dreaming?

“Oh, you drunk fuck. Get your ass over there before she starts tapping her foot or by God you will regret it.”
He stood, bewildered, and made his way over to the back corner of the room.

“Kneel.” Her voice was low, but feminine, and very confident.

She interrupted him. “Kneel.”

Quietly, Michelle reached over and tugged at his pant leg and motioned for him to join her on the floor with an alarming look on her face.

He began to worry for her safety. He knelt.

He didn’t notice that the club had begun to clear. By the time he realized that the noise level had changed, there were about half the usual patrons still in the room. All of them wearing black. Most of them sitting at tables, watching.

Michelle crawled forward and turned to face him. She placed her hand on his thighs, and then ran them up toward his waist. Her fingers fumbled with his belt.

When her small hand reached in to grip his cock, it was already hard despite his shock and confusion. By the time her tongue was circling his head, he was certain he was dreaming.

He’d been there a few hours, so the alcohol had taken hold. To her credit, she didn’t seem to tire from her task. When he finally felt the orgasm building, he looked up at the woman.

The corners of her dark red lips tilted upward slightly. “You may.”

What the fuck? The words tore into him and pushed him over the edge. With a grunt he came into poor, sweet Michelle’s throat. She stayed still for a moment while he considered whether or not he was going to faint.

“Your penance is complete,” said the woman. “You may go.” Michelle stood up and walked away.

The waitress arrived with a warm rag and his credit card bill. “Here you go. It’s on the house tonight.”

Still confused, he took the rag, cleaned himself up and refastened his pants and belt.

He looked to the woman, and she shook her head. “You may go.”

He came back to the club every day for months. He never saw Michelle, the woman, or the waitress again.