Home » Erotica: The Smell, Taste and Love of Chocolate 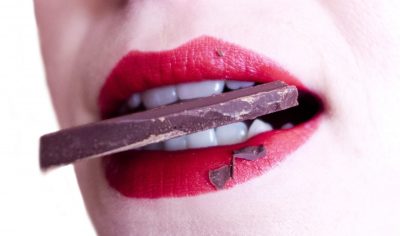 Kara always loved the smell and taste of chocolate. Now that attraction had turned to flesh. It wasn’t that she didn’t find black men attractive. There were many that caught her eye.  But that was as far as it ever went.  As the years rolled by her taste in men grew darker along with her needs and their skin. When Kyle crossed her path it was a connection that continued to grow never losing it’s intrigue and magic each time they reached out to see if the other was still there.

Three years went by of taunting, teasing and bartering on who would come to who. Too many similarities in their lives and too high of a density of chemical attraction lived between them to let it go much longer without finding the truth. Finally, the opportunity presented itself with a last-minute business trip taking Kara right into his city. The meeting for one night was arranged and now at 7:45 she sat at the bar in the hotel waiting for him to show.

She had arrived a bit early. Good thing as a text came to her phone saying his dinner meeting was running late and it might be 10:00 before he could come her way. Many thoughts ran through her mind. First one, Why was she even going out of her way to have this man for a few hours just to curb her curiosity? Another thought, Maybe she had misjudged him all these years and he was nothing more than a player luring damsels to his web for a late night tryst? The more she thought about it the more she tired of the whole idea and was ready to head back to her room for an early night. It had been a long day for her and the thought of Kyle arriving past 10:00 wasn’t appealing when she had an early flight in the morning.

“Let’s call it a night lover. Past 10:00 doesn’t work for me. I have an early day tomorrow. Maybe it just wasn’t meant to be. I still adore you. Sweet dreams.” She could at least be sweet about the whole thing, she thought. Not react as a vengeful bitch, even though she had re-arranged her travels plans precisely to spend the evening with him. But these were the risks with long distance pseudo lovers.

Kara wasn’t of the emotional makeup to let a set back like this, as disappointing as it was for her, ruin her evening or her thoughts of Kyle. She’d just let it go. Let it be whatsoever it was meant to be. On her way back to her room there was a nagging inside Kara’s soul to not give up. But a tired mind and body kept her moving forward.

Back in her room, she turned her mind to her early flight and set in motion her nightly rituals of unwinding. Calming music drifted from her laptop as she got undressed and washed her face for an early sleep.  Kara’s phone chimed an incoming text at 9:45. It was an image of Kyle’s ass adorned in a pair of pale lace panties she had sent him months ago to see his dark aching cock stuffed and struggling against the fabric. Now displayed before her was his taut, panty adorned ass filling the frame along with his words, “Are you sure?”

“Fuck!” she said out loud. Her eyes studying every pixel in the frame. Her chest tighten and thighs clenched as all the reasons the connection never failed to arouse rushed over her.

“My gawd he is beautiful.” She mumbled as she searched for a reply that didn’t sound overwhelmed, eager and ready to devour him at that moment. “When can you be here?” she text back.

Kara thought of her unmade-up face, need for a shower and her hair wrapped in a tight bun. “Shit!” The shower could come later. “OK” She simply text back and rushed to quickly do her hair, makeup and throw on at least something comfortable but presentable. He’d have to take her as she was since he missed the ‘prepared look’ of her earlier.

His knock was at the door within 20 minutes and Kara stood on the other side wondering what she’d feel once she saw him. Opening, there stood Kyle all 6’1″ of him dressed in black, shirt opened to reveal his perfect pecs and a hood over his cornrowed hair; light brown piercing eyes penetrating into hers. “Kara….” was all his perfect mouth uttered.

Kara took a deep breath and welcomed him inside. “Just stand there.  I want to take you all in.”

Kyle stood in the entryway ready to be studied. She couldn’t believe he was there. After all the talk, teasing, and fantasizing about what it would be like to have him before her, here he was, ready for whatever she desired. Breathing, looking, smiling and wanting her. He wasn’t the accustomed submissive or even switch male that she was used to standing before her, ready for her beckoning. He stood as her equal in every way and yet relinquishing all he was to her at that moment. The desire that was welling up inside her hadn’t been felt in a long time…ages in fact.

Moving him to the edge of the queen size bed she slowly removed his light leather jacket. She continued to stare, study and take in the sensuality of this amazing specimen of the male physique. Even his aura seemed to drip sexuality. She ran her hands under his brushed satin black shirt and admired her pale skin against his chocolate flesh. She loved the contrast and his smell as she leaned in and touched her lips to his. Fuck… was all she kept thinking as she wanted to take him right then.

Shower…yes…I need to shower… quickly. Ran through her mind. Enough small talk was easily exchanged and then Kara excused herself to shower.

Feeling the warm water rush down her skin helped to gather her thoughts and after drying she dressed in the black teddy she’d grabbed on her way to the bathroom. Even after showering she could still smell the vanilla/coconut scent of his beard in her nostrils. Just take him Kara…don’t think. She took a deep breath reminding herself who she was. A strong dominant woman who took charge of those who came into her life.

Turning the corner she found Kyle had already undressed, linens on the bed pulled back and his beautiful chocolate frame laying across her bright, white hotel sheets.

And…her pale lace panties pulled taut across his hips with a rigid and hungry dark cock lying on his firm thigh. Her panties unable to contain what awaited her.

Roles melted into a natural rhythm. Soft touches, primal pulls, lustful turns and an understanding that this was simply…Kara and Kyle. Their energy mingled and flowed as if centuries of coupling had existed between them. Fate bringing them back together to touch once again the magic that had lived before. Kara’s fine-tuned sensual hands melted into his flesh, stirred his energy and time was lost as Kyle’s skillful, inhabited cock found a familiar home, over and over again.

The next day Kyle’s vanilla/coconut smell still lingered on her skin and with each inhale his scent sent the rush of memories of the enchanted hours spent before her flight.