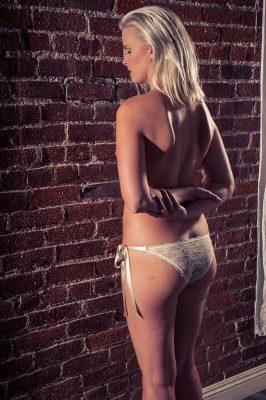 I was very excited, that night as I prepared to meet with daddy. So excited, that my stomach was a little upset, since I knew it was to be a night of firsts. Daddy had refused to give me any details of what he had in mind, although we had talked about some things I was interested in but hadn’t done yet. He was so mysterious! It turned me on, and also made me nervous.

So I took special care to dress in a way that I hoped daddy would find attractive. I took time choosing the right bra, G-string, garter belt and stockings that I thought would appeal to him, completing the outfit with a tight blue skirt, a white blouse, and white heels. I took more time than I planned to, putting the outfit together and bringing along a few things that I thought might contribute to the fun. As a result, a couple of minutes before I was supposed to be there, I texted daddy that I was going to be late by about 30 minutes. He said only that I should text him when I arrived.

I must say that the bimbo side of me often takes too long to get ready, but once my date sees how I look, it’s never a problem. I can’t deny that I’ve gotten away with a lot in my life because of my looks, and that’s why I’m such a brat. On this night, I pulled into daddy’s driveway as Eminem and Akon sang “Smack That” on the radio. I texted daddy that I was there, and the garage door went up.

I walked in through his garage, and he opened the door to let me in. We looked at each other, and I hoped that he would kiss me. He is such a good kisser! But he didn’t. He looked at me coldly and told me to go sit on the couch. I did so, looking at a pull-up contraption right next to the couch and idly wondering if he was planning to hang me up on it.

He returned after a while, and asked me what time I had arrived. I said nine thirty. He asked me what time I was told to be there. I said nine o’clock. Daddy is a military man, and I’m sure timeliness means a lot to him. He went to one of the top military schools in the country. I was fidgeting and feeling very uncomfortable, since it was obvious he was not overlooking my violation of his order, and he didn’t care how cute I (hopefully) looked.

He told me to go upstairs to the one room with an open door, which he called “my room.” He said to take all of my clothes off, fold them neatly in a chair that was in a corner of the room, and then open a bench in the center of the room that contained an outfit he wanted me to put on. He looked right through me. All of my efforts to connect made no impression on him at all. It was unsettling.

After getting my orders, I got up and silently went upstairs to “my room” with my eyes downcast. It looked like an interrogation room – bright, harsh lights that would be good if you were trying to coerce someone to confess to a crime – and in one corner, a table with a number of tools laid out, including a riding crop, a chain of some kind, some vibrators, whips, and other items I didn’t recognize. But at this point, I didn’t want to piss daddy off any more than I already had. So I took off all my clothes, folded them super neatly, in case he decided to inspect them (he did), and opened the bench to find the outfit he wanted me to wear.

The “outfit” consisted of a black G string, with a small package containing a chain. I managed to get the chain out of the package without removing it from the G string, in case I didn’t have permission to do that, and then I put on the G string, the chain, and some black heels I had brought along, and went to stand in the corner.

I have never had to stand in the corner in my entire life! It was humiliating, and I hated being dressed in nothing but a G string, after all of my efforts in putting together a cute outfit. On the other hand, I didn’t want to anger daddy. He told me to stand in the corner and think about the importance of being on time, and so that’s what I did…just in case daddy could read my mind and check the thoughts I was thinking. I stood there for what seemed like forever, but it was probably about 30 minutes. Silence. Nothing from daddy.

He told me to text him if I needed something, so at some point I got my phone and texted him to ask if I could go to the bathroom. He said, yes, and then go back to the wall. Ugh! I did so, staring at it and trying to think about being on time until suddenly I could feel him behind me. He asked me why I hadn’t removed the package (with the chain) from the G-string. I turned to look at him, and he told me he had not given me permission to look at him. So I turned to face the wall again, feeling his eyes burning into me, his presence right behind me, hating that I was standing there, so naked and vulnerable. But afraid to disobey him.

Daddy left for a while, and then came back, telling me to kneel down at the bench. I did so, and he squatted beside me. He told me that since I felt free to be 30 minutes late, he was going to spank me for 30 minutes. He gave me a safe word, and another if the spanking got too rough and I needed him to lighten up. I was determined never to use either.

True to his word, with me naked and exposed, he smacked my ass over and over again without stopping, for 30 minutes. He took pictures of my ass. (See, “I was late.”) It was my first adult spanking, and since it was my interest in spanking that first brought me to Fetlife, I can’t deny that I was very aroused, despite the pain. My ass kept gyrating and moving over towards him. But he told me to get back in position, even though he did hold my hand for the last ten minutes or so that he spanked me. I was kissing his hand, even as he took the riding crop and whacked my ass harder. It was the strangest sensation, feeling so aroused and attracted to someone who was humbling me and punishing me like this. During the last ten minutes or so of this discipline, daddy started lightly massaging my clit in between spanking me. When he took out the riding crop, he slid it between my legs and against my clit before he used it on my ass, and I wanted to climb onto his lap and bounce on that big, thick, hard cock of his. But he was focused on discipline, and wouldn’t let me. Even when I started to cum, as all of this punishment was going on, he made me wait each time, until he gave me permission. This only increased the torture. I was going crazy with lust. I had never experienced anything like this before.

After an hour or so of this punishment, daddy decided that I had learned my lesson, and he allowed me to enter his bedroom, still naked except for the G-string, which he told me to remove. I don’t know what daddy had originally planned for the evening, and I suppose I never will. But he seemed satisfied that I was sufficiently chastised, and he proceeded to reward me for taking it like a good soldier, giving me what I wanted and bringing me to orgasm more than 40 times that night. I was so aroused after all of the discipline that my pussy just didn’t want to stop, but we ran out of waterproof blankets and finally I just collapsed against him. And then, to relax, he put on a military training video.

Amanda Lee is a lusty and enthusiastic newcomer to the world of kink who identifies with the submissive/slave/bimbo roles. After a lifetime of vanilla sex, she began to explore her dark side on Fetlife just five months ago and never looked back. Starting with a mentor who exposed her rather quickly to many dynamics of the D/s and M/s relationships via Skype, she has moved on to real life adventures. In her professional life, she is a writer.