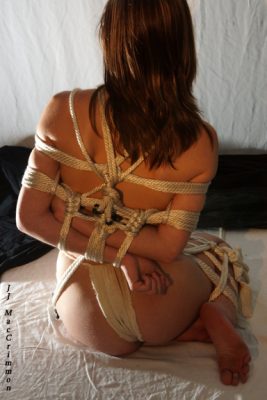 This story is inspired by the photo set “Kali’s Embrace”.

The honeyed light of candles spilled softly across her skin leaving shadows and stories in their wake. Patchouli, sandalwood and benzoin incense smoke trails swirled over her embracing her like gentle spirits drifting over her lean figure on the bed. The brazier of soft burning charcoal heated the room so her mostly bare, almond oil massaged skin was warm. She reveled in the sensations, the smells and warmth and the special embrace which held her.

An hour ago she agreed to his request. He’d explained in detail about the feelings she’d likely experience. He was an artist and needed her posed and poised in ways she’d never been before. As her clothes fell away in the candle-lit studio, her anxiety and hesitance dropped away with them as well. This was something she wanted, ‘the embrace.’

He’d granted her two favors. The first was a linen cloth secured by cotton strings to cover her private parts and protect her modesty. It would also hide the growing excitement as she fell deeply into the special place her mind would wander to. The second favor was the coils of soft nylon rope she would be wrapped in. The artist knew she’s never felt the rougher touch of jute or hemp. This would be her first time bound in this way.

In a few short minutes, her wrists and arms were secured behind her to a harness bound wrapping her chest. While she could squirm and shift, it only served to squeeze and snug the places where the rope caressed her breasts. Below, the artist had folded and secured each of her legs so she could only kneel. She felt the pressure of the coils so tantalizingly close to inner thigh yet so far away. The voices that might have cried about her vulnerability grew silent in this warm embrace.

When the last rope was in place and the artist had stepped back into the darkness to begin his work, she allowed herself to relax and absorb the sensations around her. Her mind never felt so alive and relaxed as it did in that moment. In a word – bliss. She felt the flicker of each candle in the still of the studio; could pick out each of the intermingled smells of incense and the vanilla oil which now mixed with her own perspiration. The rope’s embrace which held her immobile, shortened her breath, forced her mind to focus on those slow motion feelings she had only noticed in fleeting moments. Through the haze of sensations, she craned her head back to better hear the artist’s instruction. She knew he was only feet away, the artist’s voice only registered in her mind as a hazy, distant whisper.

Anticipation, hope, desire & peace… The embrace of the ropes opened her mind and body in ways she never thought possible. From what seemed miles away, she heard the art approach and tell her he had what he needed and would free her. Free? With that she heard her own voice whisper, ‘thank you sir, but could you lay me down for a moment or two more in the rope?” With a gentle grin and understanding, he lowered her to the cushion and gazed into her hazy blue eyes. He’d seen this look of joy and release before from the embrace. The ropes could do that.

JJ MacCrimmon is a professional photographer and educator based out of Huntsville, AL. His model, show, and event photography has appeared in web/print ads, books and as cover art for recordings. For the past six years, JJ has has been a staff photographer and presenter at Frolicon in Atlanta, GA. His work can be found here.