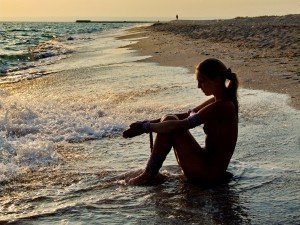 Family everywhere – much like next week will be. Parents, grandparents, aunts, uncles, cousin, brother, brother’s girlfriend (now his wife and mother of his two children). This big family vacation thing happens rather frequently – not quite annually, but regularly enough, and has done so for the majority of my life.

We’d rented two condos – one for the grownups and one for the “kids.” I was still considered a kid. I was until I married a man closer to my parents’ age than my own.

There was a beach nearby. The parents were going off to go do something boring, and my brother and cousins decided we were gonna go to the beach.

We discovered that just over the breakwater there was a nude beach.

I’d already been webcamming (for fun) for a while. I knew about my exhibitionist tendencies and my family peer group were aware that I was a little bit…erm….advanced sexually speaking.

I got them to dare me to go to the nude beach on the caveat that they stay on the other side of the breakwater.

That side of the beach wasn’t incredibly packed. There were a handful of people there. Mostly older without gym-hardened bodies. I didn’t have one of those either. I set my towel down and took off my bathing suit and then ran into the water.

I don’t remember his name. Let’s call him Albert. You’ll find out why, shortly.

He swam over to me. I was standing in the water where my tits were visible except when a swell would come in. My 19 year-old tits were really quite spectacular. Not that my current 37 year-old ones aren’t.

He was wearing his swim trunks. I let a wave push me toward him. Apparently the current was really wacky that afternoon because it pushed his fingers inside me under the water.

“Have you ever been with a guy with a cock piercing?”

The current pushed his fingers deeper inside me, and pushed my naked breasts closer to his chest.

He watched me get out of the water and lay down on the towel, face up. He sat down beside me and we talked for a while in the sun while the beads of water evaporated from my naked and exposed body.

I got dressed and climbed back over the breakwater to let my cousin know I’d be heading back with this guy and meet them at the condo later.

I’ll say this for the whole Prince Albert thing – fun to suck. A little painful to fuck.

But not as painful as wearing a bra the day after your first titty sunburn.