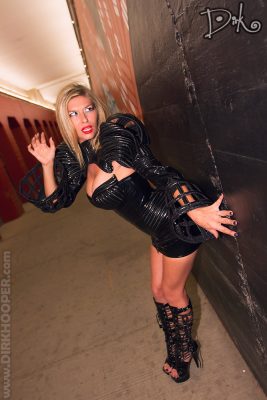 Master instructed me to wear my prettiest dress the night we first met up as Master and submissive. I had worn it only once, but it was my favorite dress. It was deep red like a fine wine and lacy. He picked me up in his new car and we drove into the city where his hotel room was. He wore a black suit with a purple tie because he knew it was my favorite color. He was always considerate like that.

The ride was short but the conversation was deep, as it always was with us. His eyes were bluer than I had remembered. His desire for me seemed tangible. He complimented me several times on how I looked. I told Him how much I love a guy in a suit and how wet I was getting just looking at Him. “You can get as wet as you want, but you’re going to earn every single thing you get tonight,” He said in a calm, but stern tone. I saw the smile He tried to hide, knowing his mere presence was causing my pussy to drip.

He took me to a quiet restaurant where we sat and ate and talked for about 2 hours. He paid, and as we left the restaurant, He took a firm grab of my ass and wouldn’t let go of it until he opened the passenger door of his car for me. Standing behind me, He whispered in my ear menacingly, “You’re going to do whatever I say whenever I say it from this moment on.” I nearly came down my leg just from His sexy voice whispering to me. “Yes, Sir. Your wish is my command,” I responded playfully, but meant every word and He knew it.

In the car He was completely silent. I waited for His command, but He gave none. We got to the hotel, went to the elevator, and He pressed one of the higher numbers. I didn’t pay attention to which floor He was on because my eyes were watching His, as if to say to him “I’m ready for your command.” However, He was a man who liked to keep me waiting. He smiled at me and commanded “On your knees.” Just as I was getting on my knees, the power went out and we were stuck in the elevator together.

There was a small blue glow in the elevator, perhaps from a battery powered light, to keep us company. With my knees on the floor, I looked up eagerly at Him. “Stay in that position,” Master uttered as He unzipped His suit pants and pulled out His dick.

He was hard as a rock and without hesitation, slapped me with it as He promised via text when we first agreed to try out a D/s relationship. He slapped my face again and again, and I thanked Him every time, more and more sensually than before. Then, with one slap, He caught me in the mouth while I was thanking Him. “Shut up, slut,” He said aggressively and with that He opened my mouth wider with the fullness and length of His dick. “How do I taste, whore?” He asked as He pulled his dick out of my mouth to let me utter “It’s the best dick I’ve tasted by far, Sir.”

“I wonder how long we will be stuck in this elevator,” I mentioned, hoping it wouldn’t be soon, and that  He would use me for the entire duration we were stuck. Master smoked calmly and coolly and allowed me to rest my legs and stand up to get the blood flow going. Suddenly, I felt His hand rub my leg slowly closer and closer to my pussy. When He got to my inner thigh He could already feel my wetness. He rubbed my panties over my pussy a little while; He told me how hot it was to watch and feel me suck His dick and lick His balls. He finished His cigarette and stood up so that we could be at eye level. He got really close to my face with His as though He was going to kiss me. He breathed down my neck instead and bit me hard enough for it to hurt a little. He then reached His hand under my dress, pulled my panties to the side, and took His pointer and middle fingers and put them inside me and fingered me while His thumb rubbed by clit. “Oh, Master, that feels so fucking good. May I rub your dick in appreciation?” I asked politely. “Yes, please do,” He insisted.

He then sat on the floor and told me to straddle His cock after taking off my panties. I did as I was told, eagerly and gingerly. The moment He was inside of me He stopped me to sit there for a moment. “Whose pussy is this?” He inquired. “Yours and yours alone, Master,” I told Him. “Perfect answer,” He said as He grabbed and spanked my ass playfully, and prompted me to fuck Him. I rode His dick slowly and then with a smack of my ass, I went faster and faster. My breasts bounced up and down into His face. He suddenly kissed me, strongly and deeply. It was our first kiss. “Thank you, Sir” I said, hoping I’d get more kisses, but I knew I’d have to earn them. “You’re welcome. Now on all fours,” He commanded. “Yes, Master,” I responded as I complied with Hiswishes.

He inspected me in the low light, mostly with His hands, lifted my dress up and entered my pussy. He fucked me nice and hard for a few minutes.  Suddenly, I felt him move a little, and then I saw it! My collar He had told me about on the phone. He put the collar around my neck and clasped it closed. It was purple like His tie. He had it and a leash in His pocket. He attached the leash onto the collar, put me on a short leash, and fucked me harder than before.

My pussy juices were all over His dick, balls and my thighs. “Master? May I please rub myself while you fuck me?”I requested. “This time I’ll allow it since it’s a special occasion, but next time you will do it when I tell you to and not when you ask me,” He lectured. “Thank you, Master,” I said gratefully. He continued to fuck me and I came several times before He came inside of me. He then made me clean off both of our juices with my tongue. Just as I was finishing, the power came back on and we straightened ourselves up as we neared our floor.