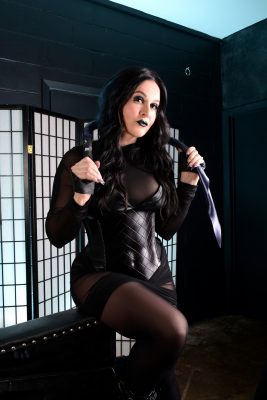 We got up to the top floor of the hotel and Master instructed me to get on my knees by His hotel room door and He led me into the room by the leash on all fours. “Take off all of your clothes and show me your favorite position of submission” He ordered and I obeyed Him. I made sure to slowly take off my clothes so that He could take me in part by part.

My eyes were transfixed on His, not as a sign disrespect, but of the utmost respect and connection. When I was naked, I got on my knees and put my hands behind my head, hands clasped, back straight, chest out, eyes down.  It hurt not to look at Him in the eyes,  but I wanted to show Him complete submission. “Beautiful. Just beautiful” He said as He began to photograph me with His phone camera.

He went behind me and stood there for a few minutes. I waited patiently. “You have a beautiful body, Juliette” He told me as He grabbed the leash and pulled my neck back so I would look up at Him. He smiled at me and took my left breast into His hand, squeezed my nipple, played with it and stretched it out as far as it would go. He then took my right breast and did the same thing. “Whose tits are these?” He asked calmly. “They are yours, Master. I am all yours” I responded eagerly. He playfully slapped them, took His dick out of his pants and rubbed it all over my breasts but especially over my nipples. My nipples became hard in no time.

With my arms still behind my head, and my mind completely on wanting to obey, I stayed in my position as He continued to tease me with His dick. He guided my head down to watch his every move. His dick was fully erect. He then told me to stand and I did I was instructed to do. Hands behind my head still, He went behind me and took my arms and put them behind my back and made me stand there while He went through the suitcase He had left in his room earlier and suddenly I felt the cold metal of handcuffs surrounding my wrists. I loved the sound they made as He made them get tighter around each wrist.

He laid me down gently on my stomach, head down on the bed while my feet were on the floor. He went back to his suitcase. He came back to me and rolled a metal bar slowly down my back, onto my ass, and down my legs. It was then I realized He bought a spreader bar to use for me. I happily spread my legs wide for Him so that He could restrain me with it.

I was left in awe of Him.

When He was done, He left me there to wait while he took a shower. I imagined what He looked like naked and thought about our elevator fun while I waited. When He came out, He was only in a towel and He went to the side of the bed to make sure I knew it. His shoulders were as sculpted and strong looking as they were in the pictures I saw of Him. His body was very attractive to me, even though parts of Him were covered by a towel. He was always gorgeous to me but seeing Him like that was a total turn on. I saw the outline of his dick in the towel and my pussy couldn’t stop pulsating. He unshackled my legs and told me what a good girl I was for laying there all quiet in the room while He showered. He instructed me to take a bath and then rinse off in the shower. I did as I was told. In the bath, He made sure to tease me. He watched as I soaked myself up with body wash all over my breasts, pussy and ass. His dick got stiff in the towel as I slowly played with my nipples and jiggled my breasts playfully for Him. He came over every once in awhile to play with a nipple or put His hand in the bath water and play with my clit. He was so good at teasing.

When I was out of the bath and shower, He told me to get on the bed. He had another surprise for me. He took out a sexy purple nightgown in my size. He then took off his towel and, to make me laugh, pretended to put the nightgown on but then quickly told me to raise my arms up and He dressed me like I was His doll. I am His doll. I stayed in my position on the bed with my beautiful new nightgown on, taking in the sight of my Master. His body in totality is delicious. He laid on the bed next to me and told me to get in between His legs and blow Him. I happily began to lick the head of his dick then put it in my mouth. I concentrated first on the head and then moved my way down and choked a little on His cock. He watched me the whole time, giving me little instruction as He already knew I knew what I was doing. I took His dick in and out of my throat for a few minutes and then rubbed it with my hand while I licked His balls. “Oh yes, Juliette. That’s it. Lick my balls” He demanded and I continued. His dick was rock solid. He took control for a second and slapped my face with it. “Spit on my cock you slut” He commanded and I spit as much as I could. He took His dick and rubbed it all over my face. I enjoyed every minute of it but put my eager tongue out to let Him know I wanted more.

He got up, told me to lay on the bed on my back with my head at the edge of the bed. “Mouth open, tongue out” He urged and I listened. He then slapped my tongue a few times with His dick before putting it all the way in my mouth. He fucked my throat with vigor and told me what a good little subby slut I was. He reached forward and rubbed my clit as he fucked my face. It was like no other sexual experience I have ever had before. Within minutes He and I came at the same time. It was incredible. That night He had me sleep at His feet, with His feet using me as a foot rest, right where I belong.