Home » Let’s Talk About Your Journal 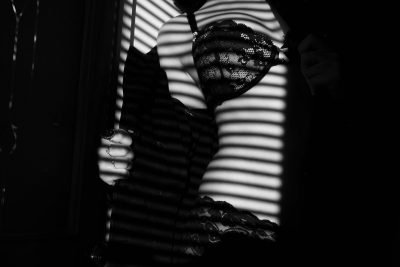 The adrenaline made her heart pound in her ears. Aroused and scared, she fought the urge to call red, she closed her eyes and worked to control her breath. It was so quiet, she chewed on her bottom lip, listening. It was weird. She found herself listening for the clock in the kitchen. It was not physically possible to hear it. Her husband’s heat against her back warranted her attention. She opened her eyes. A purple satin blindfold was in front of her. Cal’s mouth was warm on the back of her neck. He didn’t speak as  he traced along her shoulders, making her cunt ache. The arousal worked its way through her body. Her nipples pulled taught and hurt. The smallest murmur of pleasure escaped her parted lips as she licked them and pulled her bottom lip into her mouth, biting down as the blindfold was tightened around her head.

Karen was thrilled with the attention. Her body was alive and electrified with waves of pleasure. Cal’s hands were everywhere, and she had never been more aware of how responsive her body was to his touch. He was on his knees behind her, drawing his prickly, unshaven face across her ass. His right hand slid between her legs. His fingers opened her lips as his middle fingers entered, his thumb on her clit and pinky on her asshole. As he pumped his hand, Karen’s body responded hungrily. She gyrated and called for more.

He could feel her eyes get big and stare through the blindfold.  She drew breath to speak but suddenly chose not to. Her shoulders dropped the restraints held her body weight, and she mumbled, “yes sir. ” So quietly it was clear she had learned it was useless to argue.

“Good slut, such a good girl.” He left her alone for several minutes. He was examining the selection of toys, canes, a hairbrush, and a couple of floggers. Karen stood in her restraints, moving her neck and shoulders. She had to be aching. Cal returned and kissed her roughly until her body responded. “What do you want?” he asked.

“You,” she stated. He smacked her thigh with the hairbrush.

She winced in surprise but said nothing. Cal wet his fingers in her mouth and began to flick her clit. Bringing her to the edge and backing off. He teased her by occasionally sliding his fingers deep inside, leaving them only long enough to feel the muscles contract. Impact play mixed with the edging was making Karen’s head spin. Sweat glistened and dropped from her. Cal’s traced a rivulet of sweat from her sex to her breast as he brought her close. She relaxed into his body; she was exhausted and sexually electrified. Every touch drew a deep breath and anticipation.

He gently maneuvered himself away and let her stand on her own feet. He removed the blindfold and released her arms.  He had pushed her far enough tonight. He wrapped a large soft blanket around her as he leads her to the bed. He cradled her in the pillows. He removed the hair elastic, freeing her hair and laying it across the pillow.  She was too tired to protest. He walked to the other side of the bed, “My darling, you were magnificent this evening. You are so beautiful”. Karen’s head was empty. She was raw and unable to respond verbally. Her arms were heavy; she flicked the blanket away, inviting him to join her.

He was playing with his cock as he stood, admiring her.  He was mostly done giving orders. When Cal crawled onto the bed, something softened in his body language. He stroked her face and kissed her forehead. “Are we still green?” he asked.

“It’s all good, but my body is” She struggled to lift her arm, “kinda’ tired. I enjoyed this evening, but I can’t explain how I feel. My head is so empty.”

“Will you let me make love to you, cum when you want, be as loud or silent as you want. Let me love you.” He didn’t wait for her response. He kissed her hard and maneuvered himself to between her legs. He planked himself above he cradling her head in his hands. His cock pressed on the outside of her sex. He came to his knees and continued to kiss her neck and face until she relaxed and opened herself to him as he entered her body wrapped around him. Karen’s head fell back as a moan of ecstasy left her. Cal moved slowly bring her to the edge quickly. He kept the pace, feeling her pussy contract. “Relax, your pussy for me.” She obeyed immediately, as soon as he felt her relax, he increased the speed and intensity. Karen’s body reacted; she felt like she was outside herself yet wholly presented. The first wave of her orgasm came as her hips raised and bucked. She dragged her nails across her back as her body responded to Cal’s attention. Words of praise and adoration stumbled from her mouth, trying to articulate the pleasure. “Shhhh, I know. Just enjoy the ride, baby.” She grabbed the sheets, locked her ankles around his ass, and rode the orgasm to the very end. As she finished, he slowed the pace feeling her relax.

“Finish me.” She felt his cock twitch inside her as his words hung in the air between them for a moment.

She smiled coyly, “yes sir, of course, sir.  On your back, sir.” He rolled off and onto his back. Karen’s aches and pains were gone; she had forgotten all about them. She licked him from his balls to the tip, taking special care with the head. She sucked just the tip increasing the pressure until his hand was on her head. He took him to the back of her throat and sucked softly as she moved up and down his shaft. His balls were in her hand being pulled every so tenderly the way he like it. She mixed the speed and pressure as his cock grew hot. She took him in hand and stroked him as she maneuvered herself forward, letting her breast sit either side of his engorged cock. “If it pleases you, Sir, I would like to drink,” she said as she squeezed her tits around him and put the tip in her mouth again. Within moments he exploded into her mouth, hot cum hitting the back of her throat. She continues to milk every drop until he pulled her head away.  She didn’t move from between his legs. Instead, she placed her head on his stomach and said nothing. She twined her fingers through his chest hair lazily as he stroked her hair. Drifting on calm seas, they were both soon asleep.