Home » Mr. and Mrs. Shameless Go to the Circus 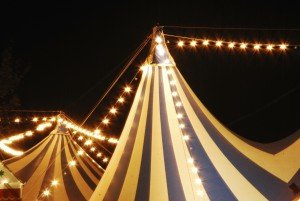 And knowing that he knew all of these things, I still said the words, “Whatever you want.”

After so many months of so many hours talking, I had no idea what ideas he’d stashed away in that sadistic mind of his.

As soon as I said the words, they hung in the air with the sound of his smirk. I immediately followed up with, “Just don’t kill me.”

Having no clue what to expect, I dressed as best I could for what I thought he’d enjoy. I’d put on a tight fitting black dress over black lingerie: bra, garters, stockings – everything but the panties. Remembering the last time he made me stand for hours in rope wearing those “sexy-but-severely uncomfortable” heels, I chose my black knee-high boots with the thick heel for comfort. I was a masochist, but not an idiot.

I left the color to my makeup – bright red lipstick, heavy eyeliner, shadow, and mascara. It was more for the aftermath than the initial look. I liked the thought of the colors streaking down my face after good use.

He gave me a once-over when he arrived. He slammed me back against the wall in greeting, his hand traveling up my thigh and under the skirt as he kissed me. I felt the smile form on his lips as he became aware of my bare flesh beneath the garter belt.

Pulling me away from the wall he stripped the dress off over my head and pulled my tits out over the top of the bra. With a tweak and a smile, he pulled me forward by the nipple and used his legs to bring me down to the floor, face down.

After a few minutes I was in a quick and dirty hogtie.

“Whatever I want, right?” he asked.

He placed the blind fold around me first. Then I felt the force of the gag against my lips and opened my mouth to accommodate it. With a slap on my ass, he stood up and walked a few paces. I heard the front door open, and then…

“Alright, she’s ready. Help me get her into the truck.”

I’m not certain how many there were? Two or three? I was hoisted up and taken outside. They set me down on a blanket and I felt my body being dragged forward. It wasn’t freezing out, but it wasn’t warm either. I was glad to have the blanket between myself and the cold metal bed of the truck.

I felt someone sit down beside me and the doors open and close before the engine revved. They were taking me somewhere.

We were travelling maybe five or ten minutes when my companion started taking advantage of my situation. Fingers ripped orgasm after orgasm out of me that were muffled by the gag and the sound of wind in my ears at high speed.

By the time the truck came to a stop, I was straining against the rope binding my wrists together behind my back. I remember hearing another car pull up and park beside us. It sounded like it was traveling on gravel.

I heard the lift gate open and a voice I didn’t recognize said “One…two…THREE” and the blanket I was on was dragged back. “Had yourself a little fun on the ride, did you?” The same voice asked as a pair of cold fingers teased at the wetness between my parted thighs.

I felt the weight of the truck bear down as someone climbed up. I was being untied. I could make out the voices of four different men aside from the one I recognized. He was silent, and I assumed – the one untying me.

I was helped to my feet and my wrists were bound together again in front, then brought up over my head to rest behind my neck. “Keep them there,” he whispered in my ear. It was him. I nodded my response, unable to say anything with the gag still in my mouth.

“Let’s go in,” said one of the voices. I felt a hand push me forward from the small of my back, and I took a few precarious steps in the direction.

“No, this way,” said another voice I didn’t recognize, and I felt myself get pulled forward roughly by a nipple. At this point, I was unable to hold back the drool coming out from the sides of my mouth, and as the dribble coated my chin I was silently thankful that the blindfold was absorbing the tears coming out of my eyes.

We were definitely walking on gravel, and it took several minutes in the cold to reach our destination. I could feel the difference in temperature, but the sound still carried through the air as if we were in a really large space – not quite a building.

“Over there, to the center one,” said the voice of my lover.

“Hang on, I’ll put down the blanket,” said another voice.

My arms were aching at this point. I hated holding them over my head like that, and I let out a muffled cry and bent my elbows forward and back to signal my distress.

I received a strong slap to each breast in response, followed by several minutes of groping and sucking – not by one, but two different men.

Once I was released, I doubled over and the next thing I knew, I was being dragged back down to my knees on the blanket, over what still felt like fine gravel beneath my feet. My wrists were brought back over my head and lowered down, so I was leaning on my forearms and elbows with my ass up in the air.

“Oh, damn. Look how wet she is!” as my thighs were kicked apart.

“Have we figured out who gets what yet?”

“Hang on, we’ll have to take the blindfold off, first. Everybody ready?”

There were some sounds I couldn’t make out and I could just feel myself vulnerable, exposed, and untouched for a few minutes as I held that position, willing myself not to move.

“Ok,” said my lover’s voice. Let’s do this. I felt his grip on my hair raise me up to an upright kneeling position. His lips touched mine and I felt calm wash over me as I melted into his familiar kiss. Then I felt the also familiar tip of his cock touch the side of my cheek. I opened my mouth and waited for it to push its way past my lips.

That’s when he took the blindfold off. It took only a few seconds for my eyes to adjust. I saw his cock first, right at the opening of my mouth. Then I looked up.

I fell back as the scream escaped my throat. It was him, I think, but in the most grotesque clown mask I’d ever seen, complete with white and blood red makeup on the part of his mouth and chin that were visible. I turned my head and found three strangers, all naked and stroking their hard cocks wearing similar masks.

“Oh my god,” was as much as I could say before he reached for my hair and shoved his cock into my mouth.

After a few pumps, he got down to his knees and pulled me forward, once again putting my ass and cunt up for display behind me.

Now knowing what was back there, I squealed and heard laughter as someone pressed their fingers inside me, then followed it up with a thick cock.

One by one, they took me – each just taking a few minutes in my cunt while my lover’s cock fucked my mouth. The tears were streaming down my face now, but it wasn’t because I was afraid or hating it.

It was because I knew I was enjoying it.

“Hang on, I’m going to flip her over,” he said as he pulled out of my mouth. “If I know my slut, and I think I do,” he said as he re-positioned me to face the trio of hideous clowns in front of me, “She’s going to want to savor every moment of watching her holes get used by a bunch of strangers in clown masks.”

He pulled back on my hair hard and gripped my throat with his free hand. “Am I right, my whore?”

I nodded. His grip grew tighter. “Can’t hear you, whore.”

“Yes, Sir,” I squeaked out, coughing as he released the pressure from my throat.

“I’ll have the rest of her later,” he said as he stepped away. “Why don’t you boys work out how you’re going to to all fuck her at once. I know she’ll really like that.”

And so, the three anonymous clowns worked out the logistics while my lover watched all three of my holes get filled with clown dick at once. And, one by one, each of the clowns pulled out of his respective hole and came on my tits.

They left, still wearing their clown masks and each offering me a “good girl,” and a “thank you,” before they took off. Outside, I heard the revving of the truck as it drove away from the circus tent.

That was when I looked around for the first time. We were in the center ring under the deserted big top.

As soon as his friends had left, my lover had come over to cradle my head in his lap. He’d removed the mask, and was smiling from ear to ear, clown makeup smeared all over his lips and chin, and around his eyes.

“You’re all smeared,” I said, reaching up to touch his lips. He laughed.

“What?” I asked, still in a bit of an altered state of mind.

“Get up, you have to see it to understand.”

He walked me over behind the bleachers to a dressing room with a large mirror and stood me in front of it.

I was a sight. My own makeup was smeared and my hair disheveled, but I was also covered in colorful smudges from their mouths. My lips and chin, my neck, and of course my breasts, streaked with come and color.

“Yeah.” He stood behind me, arms wrapped around me, chin resting against my shoulder. He smiled again.

“Only you could still look so beautiful wearing nothing but clown come.”

I laughed. “You’re a sick fuck, you know that?” I teased.

“Yeah. But you liked it, so I think that makes you an even sicker fuck.”

I turned around and pressed my body against his. He embraced me into a deep kiss.