In this part I installment of this short story, we meet Mistress Diana in a delicious tale we had to split up into two parts because of its tantalizing nature. Indulge!
Home » Prologue to a Journey – Part I 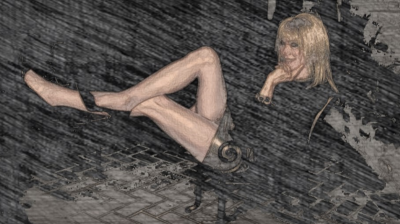 The image in the full-length mirror was that of a svelte woman with shoulder-length, dark-blond hair that covered her ears and surrounded a tan face of smooth Nordic features. She had a strong chin, full lips glistening with silver gloss, a straight, well-proportioned nose, and high cheekbones. Striking blue eyes with a slightly greenish tint gazed back at the woman in the reflected image. Her eyes narrowed slightly, and she touched one of her perfect eyebrows with a pencil. Satisfied, she smiled, revealing perfect teeth.

“Just right,” she said. Her soft but husky voice carried the trace of an accent of someone who originally spoke an Eastern European language. “I look exactly as I did last night.” She quickly surveyed the rest of the image, seeing a slim body with the long arms and fingers of a pianist. Her nails were long and white. Two silver chains hung around her neck: one suspended a small Christian cross while the other held two shiny cylindrical keys. A black bra enclosed her small breasts, the garment visible through a sheer black long-sleeved blouse that let her golden tan skin shine through and covered her body from her shoulders down to her flat and firm midriff. Her slim hips were hugged by a silver satin lamé skirt that stopped at mid-thigh. Sheathed by sheer stockings, her perfectly sculpted legs ended in an exquisite pair of bright red Louboutin Pigalle pumps. The dagger-like stiletto heels elevated her stature to well over two meters. She turned to the side and gave a toss of her long blonde tresses as her slender, delicate fingers smoothed the silver lamé over her perfectly rounded bottom.

Tall, sleek, and sexy, she thought.

“Let’s go in and see if our boy is awake yet,” she said to the image. Stepping away from the mirror, a quick glance around the room revealed a modest, well-lit, uncluttered living area. Seeing nothing out of place and no evidence of the previous night, she strode to a closed door on the other side of the room. Next to the door was a keypad on which her nimble fingers quickly entered a ten-character code. The door slid open, and she stepped through the entrance into a darker room. The door closed silently behind her when she touched an identical keypad on the inside. The hard shoe soles and metal taps of her heels struck the smooth stone floor, echoing through the stillness with each step as she approached a man located in the center of the square space.

“Oh good, I see you have awakened from your beauty sleep.” Her voice, while firm, conveyed a gentle tone.

The man nodded uncertainly, obviously confused. She sensed fear in his eyes, and she smiled with the same self-assured, satisfied smile that had shone in the mirror. Her tongue darted slowly back and forth across her soft lips as she savored the sight.

“You remember who I am, don’t you? Mistress Diana, like Diana the Huntress.”

He nodded in recognition.

She gestured around the high-ceilinged, unfinished stone-walled room with her hand as she spoke. He nodded again as she regarded the man before her. What she saw was a well-muscled, trim, thirtyish man who, judging by his toned physique, must have lived in Mars’ weak gravity less than a year. He was suspended by ankles that were each tightly gripped in wide, thick, heavy steel cuffs. They in turn were secured to short steel chains which stretched to the ends of a steel bar that hung from the ceiling on a two-pulley rope hoist that ran on a track the length of the ceiling, allowing it to be positioned anywhere along the center of the room. The free end of the hoist rope was tied to a large eyebolt mounted in the roughhewn stone wall behind him. A thin rivulet of blood trickled down each of his widely spread legs below the cuffs. His wrists were similarly secured by cuffs and chains fastened to two eyebolts mounted in the rock floor. A steel bar similar to the one holding his ankles was also attached to the wrist cuffs. The steel fixtures were all plated with polished chrome and, like her skirt, shined in the dim, indirect lighting of the room. A heavy rubber gag held his mouth partially open, but rendered him speechless. His eyes were now wide awake and alert, fixed on her. Satisfied that he could be safely kept like that indefinitely, she relaxed, relishing the situation.

If he lasts long enough, his world will turn right side up. Then I could reverse his position and confuse him again. The thought amused her.

Bending over, with her left hand she held his head, which hung about knee-high above the floor, up to face her gaze directly. “You are probably also wondering about the gag. It isn’t because I’m concerned about noise, I’m not. If you recall anything of our last meeting, I live a couple of hours away from Thoropolis, and my apartment is located in an abandoned mine shaft. I have no neighbors and no uninvited visitors.” She smiled again. “It’s just the two of us here, nice and cozy. But I don’t like two-way conversations with my playmates. We did enough of that last night.”

As he looked into her amused, glittering eyes, she sensed his fear and uncertainty turning into terror.