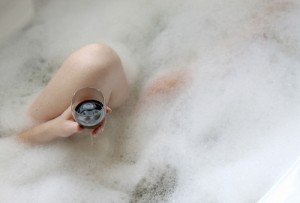 I scrolled through the chat, looking for inspiration. For that right kind of energy that was going to spark a little excitement into an otherwise lazy afternoon.

And appreciative. I wanted to feel appreciated.

There were a few of them that I could call on when I needed some attention. I’d share my dirty stories or send them the photos they’d request. One day, out of the blue, he sent me a private message.

If you are ever interested in playing or anything….

I’d been flirting with him for a while in my patented way. It’s more like flirting at someone. That way that is endearing but not with intention. He seemed nice. Sweet. Definitely smart. Sometimes funny.

That’s how the Sunday bubble bath ritual began. That first time, it was just me in the tub with the bubbles, the laptop positioned slightly above so he could see all of me in the tub. He was still too shy to go on cam himself or use his voice, so I would read his questions on chat and respond out loud.

He was usually a fan of denying my orgasms, but that particular afternoon, he wanted to see how far he could make me go.

He loved making me count them. He later bragged to a mutual friend about giving me 13 orgasms in one sitting. It was cute, how proud he was of his achievement.

Over the course of three months, we rarely missed a Sunday bubble bath. They were our ritual. The times when he knew he wouldn’t be available, we’d reschedule it for Saturday or Monday night. But that time in the tub with him watching me was precious to me.

I can probably pinpoint the beginning of the end of our relationship to the first time he missed bath time. I sat for two hours waiting for the call that never came. Eventually I took the bath on my own.

I take them all on my own now. But this morning, I found myself scrolling through my feed, looking for that right kind of energy….