Dexx: So last night you won an award. Fetish Film of the Year?

Ernest Greene: Actually it was for body of work from the L.A. Fetish Film Festival.

Ernest Green: It’s for the “millions” of fetish films I’ve made. I’ve made a lot of them but I still think it’s under seven digits. 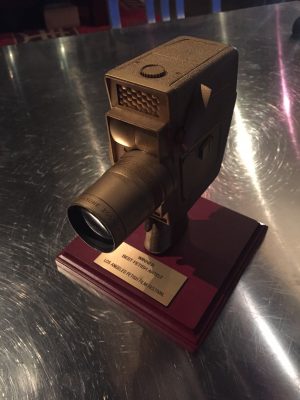 Ernest Greene: And off camera, I was the first guy who was ever actually paid, starting with the Marilyn Chambers gig in “Private Fantasies 6” to do the rigging, to actually tie people up. Bondage rigging as a job didn’t exist here before that. In Japan it did. They were already making extremely sophisticated and very high quality videos and they had a guy whose job it was to do the bondage. I was living in Little Tokyo at the time and started watching Japanese bondage videos to figure out how they got such different effects with rope. So after I thought I could do that, I started using that in my own rigging and pretty soon, there were whole shibari groups. There’s ShibariCon. Believe me, when I was looking at those videos the idea that there would some day be an event in the US called ShibariCon was unthinkable. And sure enough, some of my work got over there and I ended up doing a photo book with one of their guys who they brought over here–a book for the Japanese market of combined Japanese and American bondage. Ken Marcus shot it.

Dexx: Oh yeah, he showed it to me when I interviewed him. Beautiful.

Ernest Greene: You can blame me for all that boring rope work you have to watch. Watching people just endlessly pulling string, honestly I know I’m going to make someone hate me for this, but to me, it’s like watching people do macramé, I’m glad there is a naked body in the middle of it to look at but over all I’m still a leather-and-chains enthusiast.

Ernest Green: I think it’s a sensual thing for the people who are doing it while they’re doing it, but in terms of theatre—

Ernest Greene: As theatre, it’s a little slow, though there are exceptions. One couple from England we know, Clover and Wyckd Dave, are fantastic.

Nina: In one 20-minute clip of a continuous performance where he ropes her in continuous motion is just amazing.

Ernest Green: He kept her in suspension the whole time. She did not touch the floor once. It’s mesmerizing. Proving once again that there are about six people who know how to do something and everyone else should just not even bother.

Nina: He didn’t spank her once, though. I think she was a little disappointed about that.

Ernest Greene: These are English people. She even said something about it after. ‘A little bit of the cane every now and then, I wouldn’t mind it.’

Dexx: When did you bring shibari to the states?

Ernest Green: This was in the early 90s.

Dexx: Was it challenging to find actors and models to star in those productions?

Nina: Back in the 80s when I was first offered the chance, my exes basically said bondage movies are only for performers who have nowhere else to go. It was for the down and out. It was the last stop before actual retirement.

Ernest Greene: It certainly became the exact opposite. I began working with Andrew Blake, who started incorporating fetish and bondage elements in his really beautiful shot-on-film pictures and they were extremely successful commercially. After that, there came to be a whole bunch of people making BDSM pictures and a whole bunch of performers who came into the business mainly to do those pictures. For the first time we had specialty bondage performers who actually understood and enjoyed the material we created. Life was so good for me then, because I didn’t have to explain anything anymore. I’d tell them what I had in mind and they’d say ‘Oh yeah! I did all of that up at Kink.com last week and I’m fine with it.’

Dexx: Out of all the films you’ve produced throughout the years, are there any that stand out to you as being particularly memorable to create, or any of your favorites…

Ernest Greene: I went to some lengths to recruit talent who were BDSM-oriented and experienced.

Nina: These were all girl/girl shows with full nudity, real restraints and real whippings, implied penetration. We did them hardcore, but we didn’t shoot hardcore.

Ernest Greene: In those days, hardcore with bondage was considered legally risky.

Nina: And he said, you know what shoot it anyway, and someday…

Ernest Greene: It will be okay. Yeah, couldn’t get my boss to go for that. So we shot it softcore. But those 20 segments of “Nina Hartley’s Private Sessions” are nice because it’s obvious everyone was having a good time. They were the only sets I ever worked on where people wouldn’t go home. Normally when someone’s scene is wrapped up, they want their check and they want to get out of there. Eventually it would become so crowded in the back room I would have to push everyone to the rear because they wanted to stay and watch everyone else’s scenes. We won some awards for those shows but I wouldn’t call them art. I would just say they were fun. Then I finally got a chance at doing this on a large scale for Adam and Eve.

I’d started editing Taboo magazine for Larry Flynt by then. One thing that’s for real about Larry is his commitment to the 1st amendment. When we first started doing Taboo I said we really needed to show penetration with bondage if the magazine is going to be competitive. We’re going to have to show real BDSM in this publication. We got some unexpected support from by Larry’s lawyer, Paul Cambria. He said, ‘Bondage isn’t the issue. Consent is the issue. No one’s going to go to jail just for showing somebody tied up having sex. If they’re saying “No, let me go, I hate it, get off me,” that could get you up in front of a jury. If on the other hand, the person who’s going to be tied up brings a pile of rope to someone and says, ‘Please tie me up.’ Then there’s no issue. We started showing pages and pages of tied up people fucking in every single issue of Taboo. This kind of paved the way for Adam and Eve, the most conservative company in video, to fund me to do some big features that have bondage with hardcore in them. I’m most proud of my three Story-of-O-based titles, “O–The Power of Submission,” “Surrender of O” and “The Truth About O.” They were big productions with all-star casts. They sold like crazy and, of course, nobody got in any trouble for doing them. In a way, they were rehearsals for the writing of my book.

Dexx: Let’s talk about that book, “Master of O.” What led to you feeling like you wanted to write a book?

Ernest Greene: I started out as a writer. That really is my original career. I began very early, had my first piece published in Esquire when I was 15. I was also an enthusiastic reader of erotic literature. In my day, the gateway book for BDSM was “Story of O,” which I read when I was a teenager. Even then, though I didn’t know anybody who had ever done any of the things in the book some of it felt very real to me and some of it was surprisingly flat. But like most people blown away by what a terrific writer Anne Desclos really was. I was amazed by how much punch she could pack into 200 pages. The drama of it, the way it was written and the richness and the beauty of the visual descriptions struck me as entirely believable and credible. I didn’t know where these people were or how they got into this, but I was mesmerized by the whole reading experience. Then, when I got to the end of the book and saw that there was no end. The original book really doesn’t have an ending, though Desclos wrote one in which O committed suicide after Sir Stephen abandoned her. Well, that was not acceptable to Jean Paulhan, the mighty lion of French letters for whom she wrote it. She never expected it to be published and wanted to conclude it on a low note in keeping with her low opinion of the people upon whom she based the characters. There really was an O, a beautiful middling-famous actress who was the embodiment of La Belle Masochiste. Paulhan wouldn’t let the author bury what he considered a brilliant book, or end it on a downbeat that would scare off readers. This says something about their relationship, the difference of the relationship between men, women in Europe and here. A women author here would say: “no I don’t want it published and I don’t care what you think,” and that’s the way it would be. He took the book to the controversial publisher Jean-Jacques Pauvert and after some rumbling with the French government they got it into print, even without an ending.

I read it and found it compelling but also unsatisfying. It bothered me that the male characters in it were completely lifeless. O was the only living character in that book. Anne Desclos knew the woman all the sadistic guys were after, Paulhan included, regarded her as a romantic rival and disliked her intensely, which is one of the things that always amazes me when people say, It’s such a romantic book. Hardly. O and those around her were given pretty rough treatment from the author. I always felt they deserved better and I never bought the line that the women in the book endured suffering for romantic reasons. I thought the failure to address the real, erotic pleasures of sadomasochism for those, male, female and other who are drawn to it was a dodge to create a more respectable motivation for them than dark lust. I’m comfortable with dark lust and I wanted to fix that failing of the original.

Check back next week for the final segment of this three part interview!