Home » What Is Fetish Photography? 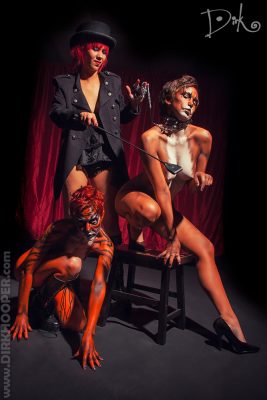 Fetish photography is a catch-all phrase for a number of different subjects and subject matter that is largely composed of sexual fetishes, fetish fashion, bondage, domination, submission, and the people and community that practice those activities or identify as a member.

Fetish photography differs from other types of photography because it includes those subjects and characteristics, but often the lines are blurred. Fashion photography, music videos, movies, comics, and advertising have appropriated the look and style of fetish photography to give their work an edge or make it sexier.

It’s much easier to show you what fetish photography is than to try to explain it, so if you’re easily offended or you’re at work, now is the time to tune out.

Here is the work of Czech photographer Jacques Biederer from the early 1900s.[1]

So, well over 100 years ago, fetish photography was alive and well.

My all-time favorite fetish photographer (and someone who was deeply influential in my own work) is Hemut Newton.[4] Newton loved dominant women, and his fashion photography, initially for French Vogue, eventually found its way into luxurious books, fine-art galleries, and everywhere else you can imagine. Not only was he an amazing fetish photographer, he’s one of the best photographers who ever lived.

After publishing his book White Women in 1976, Time Magazine proclaimed Newton “The King of Kink.”[5]

Fetish photography has exploded over the past thirty years, due to the proliferation of devoted beautifully-produced glossy magazines like Skin Two, Marquis, and Von Gutenberg. Obviously the internet made this work widely available to everyone in the mid-nineties.

Modern fetish photography has some absolutely amazing photographers who are pushing the limits of the medium.

Here’s one from Peter W. Czernich.[8]

Speaking of bondage photography, I’m a big fan of the work of Victor Lightworship.[10]

What separates fetish photography from other genres can simply be the intent of the photographer.

The above photo is a collaboration between fashion designer Christian Louboutin and filmmaker David Lynch for a fetish collection.[11] While most people would look at that photo and see something mundane, or maybe even ridiculous, the intent behind the work is to provoke a response and be seen as fetish photography.

[3] Robert Mapplethorpe: Meet the Famous Photographer of the ’80s

[5] Your ultimate guide to Helmut Newton