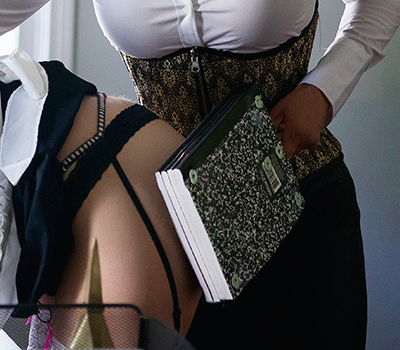 This is less of an article and more of a list. However, if you have stumbled onto Kink Weekly and are new, then my hope is that you find this list helpful in getting you started. Is this a complete list of “all the things” you need to know as you enter the world of kink? Absolutely not. These are some terms I believe cover many basics that you may come across as you start your journey. I go over each of these in more detail in my first class of my BDSM 101 Series, but these brief definitions should do the job for now!

Kinky vs Vanilla – kinky: “unconventional sexual preferences or behavior” vs. vanilla: non-kinky (could refer to a person, behavior, thing, etc.) A kinky person or couple can also have vanilla things/people in their life. Job, family, friends, even vanilla sex!

Dom vs Switch vs sub –
Dom (Domme/Dominant/Master/Mistress/Owner/Top etc.) – if not sure what someone goes by or when referring to this type in general you might say “D-type”. Basically it refers to the person who exerts control in the power exchange relationship.

sub (submissive/slave/pet/bottom etc.) “s-type” – refers to the person that gives over control to their D-type or receives whatever the D-type gives in a power exchange relationship.

Switch – refers to someone that likes to top and bottom (will explain below) or who is both Dominant and submissive – usually based on their energy with the other person. So you may have a switch that has s-types in service to them and they serve a D-type. Or perhaps someone who is primarily an s-type but enjoys Topping occasionally. These are only a couple examples – there is a whole spectrum of examples when it comes to switches.

Topping/Bottoming – I kept this separate because it refers to the position one plays during play or during a “scene”. It doesn’t tell you anything about their D/s dynamic or identity. Some people don’t involve a D/s dynamic in their relationship, so the relationship is “vanilla” except when they play – one tops the other bottoms. They can switch between the two as well – for different scenes or within a scene. Just refers to (basically) who is giving and who is receiving.

*Sidebar – just because a D-type bottoms for, say, a specific thing (like flogging) doesn’t mean they identify as a switch. Nor is an s-type who tops occasionally or for a specific thing. It’s very important for you to not place your own labels and assumptions on others. Learn or ask them how they identify.

Pan sexual – attracted to people of all gender identities and biological sexes.

Cross dresser/transvestite (CD/TV) – someone that dresses as the opposite sex. Does not tell you how they identify or their sexual orientation. In fact, many cross-dressers are heterosexual.

Negotiation (for a scene) – even for the most casual scene there should be a negotiation, especially between new play partners. This is when medical issues and triggers are discussed, as well as safewords, aftercare, what is ok or not ok, sexual touch and overall the type of scene you are looking to have.

Subspace – 2 types: physical & psychological. Basically when chemicals are released like adrenalin, serotonin, etc. when you play. Best I can compare to is a runner’s high. Not everyone will experience it and those who do will experience the effects in different ways.

Subdrop –Your body trying to regulate after those chemicals have been released. You may feel “off”, emotional, a bit depressed, etc. Things that can help may include support network, physical activity, dark chocolate, meditation, journaling, favorite movie, etc.

Protocol – A formalized set of rules controlling the interaction between Dominants and submissives. Can be within a relationship or established by a group or club. Low protocol/High protocol.

Poly aka polyamorous – state of mind/potential or actual practice – there are various ways to structure poly that works for you. Being poly is NOT about being single or cheating – the key is that all individuals are aware of all relationships.

Energy exchange – energy can be used to describe the feeling you get from another person. It’s not necessarily what they do, how they look, what they say…more just the “feeling” of them. Energy exchange in a scene can take many forms. It can feel sensual, sadistic, primal, playful, etc. It can change during scene as well. This also refers to the connection between the players.

I hope these brief definitions help. Keep in mind some people will define some of these terms differently – this is why communication is key!!