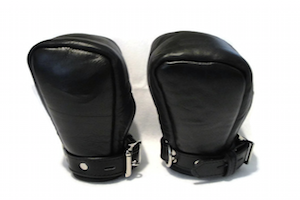 You may have seen our buying guide from last week on bondage mitts. We wanted give you some user tested ideas on how to maximize this fun accessory into your scenes! Also I use the pronoun her or she in this article but these ideas would be suitable for any sexual orientation.

Sensory Deprivation
Aside from being blindfolded, having your hands restrained is arguably one of the most frustrating acts of bondage, at least this is what my submissive anniebear tells me. Well, me being the sadist I am, of course I’ll up the ante by both blindfolding her and restraining her hands in bondage mitts. That’s not to say I’ll leave her this way for the whole scene (or maybe I will) but I like to begin this scene with a blindfold and bondage mitts, clipping the mitts above her head so she feels completely exposed. She will then be open to any sort of fun things I have planned for her such as sensation play, nipple clamps, perhaps feeding her something that tastes terrible-the sky is the limit! I prefer leather type mitts that have a ring to actually lock the buckle and also an o-ring to clip the mitts together or to other objects. Basically, versatility is key. Giving your submissive a sense of helplessness or “I couldn’t get out even if I tried” puts them in a great headspace.

Assign a Task
Nothing is more hilarious than putting bondage mitts on your submissive and then assigning her any number of nearly impossible tasks. For example, have them prepare you a snack from the kitchen and then stand back and watch the hilarity ensue. Don’t want to hear her whining throughout the task? Throw a ball gag in her mouth. You could also have them tidy up the house or fold clothes. They’ll probably have to redo the task at a later date which is all the more frustrating for them.

Give a Massage
Have your submissive give you a massage while wearing bondage mitts. It’ll be a terrible massage, but (if this has been negotiated) you can remind them what a terrible job they are doing and for every minute they do not improve will be an additional minute of discipline.

Draw a Picture
I have a very modest play partner who blushes at the sight of pornography so I like to find the nastiest photo possible and then have her draw her own version of it with limited use of her bound hands. Of course I’ll then proceed to grade her “work” and likeness to the original photo. I tend to circle the “mistakes” I find and then add them up at the end for the number of strikes or duration of punishment for said mistakes.

Pick Up Objects
This is a fun idea I observed at a dungeon once. The Dominant threw a box of toothpicks onto the floor and then required the submissive to pick them up, while wearing bondage mitts. Depending on the type of mitts you have your submissive in, this task could be nearly impossible. We watched for nearly ten minutes as the sub struggled and thought of every way in which she could pick up the toothpicks, eventually resorting to using her mouth. The Dom finally took pity on her and moved onto something else. But it was hilarious and fun watching her struggle!

These are just some starting points for you to go off of. The scene ideas are endless! Remember to always negotiate with your play partner before starting the scene and to have appropriate safe words in the event it does not go as planned. Here is our buying guide with some true tested mitts. Happy playing! 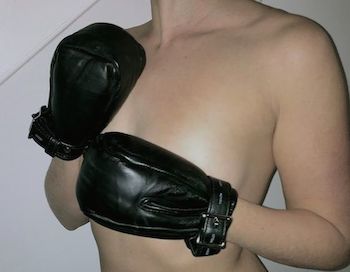 For many players, mitts have strong ties to pet-play. That is, where your submissive role plays as a puppy, kitty or other animal.

But mitts can be incorporated in just about any scene. They add an extra element of inescapable feeling to any kind of bondage. With no way to use hands or fingers, the bottom can’t fiddle with ropes or locks, or detach carabiners, leashes or straps. And most importantly, they will know it, which can send them deeper yet down the sub-space hole.

And then, of course, you can construct an entire scene around the mitts. Ordinarily simple tasks, like making a sandwich for you, take on a whole new dimension when the obedient submissive is restricted by bondage mitts. It could be challenging & frustrating for them, and it could reinforce feelings of submission and achievement for completing you instruction. For the Dominant? Pure enjoyment and entertainment as you watch your partner work their way through figuring out an ordinarily simple task.
Tips for mitts:

All buying guide products are reviewed based on the unbiased opinions of our contributors. After reviews are written, vendors may sponsor reviews to promote or extend their placement on the buying guide. For more information or to suggest a product to be included, please contact us.