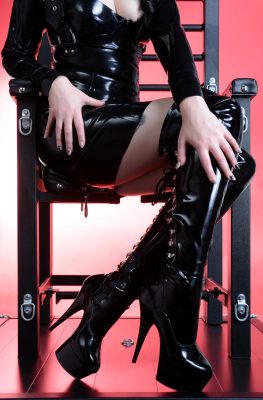 I choked as the man grabbed the back of my head and pushed his cock into my mouth as far as it could go. I tried to pull my mouth off it. I began to retch.

“She is going to get sick if you keep doing that,” the woman told her husband dryly from between my legs. She was now rubbing two fingers against my clit. I felt a mixture of dread (by being nearly choked to death by his cock), and an urge to cry out (from the amazing, pleasurable pressure mounting on my clit).

“I like when my dick slides deep into a girl’s throat,” he said as he held me in that position for a few seconds before letting me go. I turned my head to the side and gulped in a huge breath of air. I panted vigorously.

“I can do that without gagging, baby,” the woman said defensively. “You don’t need this bitch for that.”

“Fine, suck my cock then,” he said gruffly as he got off me. He lay beside me as his wife began to suck him off.

“I can’t take this shit any more,” he growled as he nudged his wife to get off of him.

She took her husband’s spot beside me. He straddled my hips. He rubbed his cock head against my warm, moist entrance. He entered me in one great thrust.

I cried out, but my cry was caught in the woman’s mouth as she made out with me. Her kisses were more gentle than her husband’s. The man had kissed me with an intense possessiveness. She sucked my tongue a bit hard before she lightly bit my lip.

She then sat on my chest and put her pussy directly in front of my face. Her husband continued using powerful, great thrusts that caused his hips to slap into mine. I didn’t resist going down on the woman. Her hand bunched in my hair as I put her clit between my lips, flicked my tongue back and forth across it, licked, and sucked. My tongue delved into her folds and I tasted sweet nectar. She rode my face until a squirt of clear liquid hit me in the face and drenched me.

“That isn’t piss, sugar pie,” the woman assured me.

I took a deep breath before looking to see if she was telling the truth. “You’re right,” I said surprised.

“Of course, I’m right,” the woman said as she thrust her pussy back into my face. “Now, clean me off with your tongue.”

I licked up every drop I could see. It had a salty, yet sweet taste to it. After a while, she climbed off me and began cleaning up my face, neck, and collarbone-all while her husband was still deep inside me.

I loved this feeling. It was like experiencing this man’s true power as he released his seed into me.

I rolled my hips around him as I basked in the afterglow of his orgasm. This sensation forced me to have my own release. I continued to roll my hips so my sweet juices could saturate his cock.

He pushed up on his hands and slid himself out of me. It left my pussy with a loud, wet smack. He then laid down beside me, and so did his wife (on the other side of me). Their arms laid across me. We were breathless. We were sweaty. We were riding clouds of ecstasy.

“You are now ours,” the man declared. “You will be ours as long as you are here. You will submit to us when we command it. You will work your ass off for us. You will be our sex toy when we order it. Do you understand?”

I was too tired to form the word “yes.” I nodded instead. A slight smile slowly crept onto my face.

The man smiled at me. “Good girl,” he said as he cupped my face in his hands and kissed me passionately on the mouth. His wife then turned my face to give me an equally searing kiss. A few moments later, I fell asleep between my two, new owners.