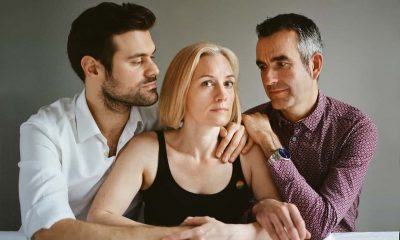 Polyamory is making more and more headlines these days. Anita realized after a long marriage with kids that she longed for more. She and her husband opened their marriage and have not looked back. Read about their polyamory struggles and successes here. This article seems to be a little more focused on Anita than her partners. Thoughts about how polyamory is being portrayed here?

Kinkiest cities in the US? You might be surprised about the cities on the list. I’m not surprised that 3 of the 10 can be found in the state of California. Did your city make the list? Check it out here. The data is from a dating app called Kink’d. We’d say these numbers still look pretty low when compared to a more widely used website such as Fetlife, but we appreciate the data. Thanks Kinky App friends for the fun data!

Consent is such a highly debated topic. This article tries to touch on the 10 things you need to know about consent. This article addresses some misconceptions about consent and bursts a few bubbles while their at it. Read more here.

So you’re single and ready to mingle. You’ve been out there in the dating pool a day, a month, a year, 10 years…. doesn’t matter.  Starting to date people you meet at kink events (munches, classes, parties, etc.) is easy when it comes to letting them know you’re kinky because you simply don’t have to.  However, what about people you meet in the vanilla world?

I realize it’s not easy for everyone and most people don’t have the luxury of being completely out about their lifestyle like I do.  Because I’m out and because of my various jobs – all of which are in the community – I pretty much get outed as soon as someone asks what I do for a living.  I can, if need be, leave out a lot and only focus on the therapist part in a vanilla way.  I usually do this in situations where I risk outing someone else or I am in a situation that involves risk to my children.  If I was dating, however, this wouldn’t be an issue and I would be chatting about it during our initial conversations.  This isn’t the case with many other people out there though.

So I would like to first point out that just because you meet someone in the vanilla world, this doesn’t mean they are vanilla.  They could make the same assumption about you!

I’d like to back up just a bit because I think one thing is important before we go further.  I want to say, like I have many times before, know thyself.  In this case I am referring to knowing how important kink is to you and how much of a priority it is in your life.  This will determine, or at least influence, your approach in this situation.  If kink is more of a fun hobby to you in the bedroom, but not too important, then you may approach the issue in a casual way.  Perhaps mention “things you’ve tried” and measure their reaction, for example.  Even if they are wildly against it – your priority may be the other connections you share and so it doesn’t matter much. However, if you are someone who wears a figurative button on their collar that says “Kink is the air I breathe” – then you’re approach may be very different.

Even if you are somewhere in between those examples I’d recommend having a starter conversation about your involvement in the scene sooner rather than later.  If kink and/or power exchange is important to you then it’s better to let the other person know so they can also decide how to move forward.  I’d say within the first few dates.

There is an exception to this.  If outing yourself to this person could put your job, kids, or other important aspect of your life at risk – take a slower pace.  Maybe you have mutual colleagues or work in the same field in the same city or your kids go to the same school.  Get to know them a little better, feel them out, and build some trust before laying it all on the table.

Beyond this, however, do it as soon as it feels right.  Otherwise you may be misleading the other person and it will only get more difficult the more time you spend together, especially if it’s not well received.