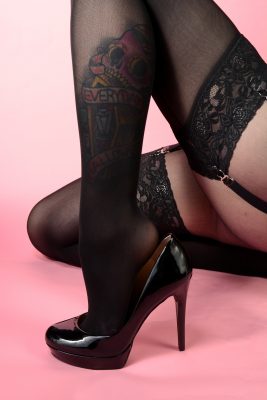 This article can be filed under “controversial” and “opinion” because it falls into both categories. You can also file it under “important,” because I think it is essential to objectively examine the practice of Dominants placing submissives “under their protection.” Although the “New Guard” has made the “protection racket” less ubiquitous, it still is around enough to be of concern, especially when used for less than idealistic purposes.

First, let’s define what “protection” (often called “mentoring”) means. In theory, it is where an experienced Dominant selflessly protects and guides a submissive. In practice, it ranges all the way from honorable, experienced Dom/mes showing newbies the ropes while protecting him/her from predators (best-case scenario), all the way to conniving Dom/mes using it as a way to quickly become the “de facto Dominant” without any of the responsibilities of a Master/Mistress (worst-case scenario.) Protection has no historical basis in BDSM; I cannot find reference to it in “Old Guard” lore or anywhere else. It appears to be an Internet-inspired phenomenon; many of our younger lifestylers have no idea what “protection” is and isn’t. Maybe this can help explain this practice when they encounter it.

In its ideal manifestation, protection has much to recommend it. An experienced Dominant is the perfect person to guide a newbie through the daunting maze that is BDSM. He/she can show the new submissive the ropes while also screening out potential predators who might seek to take advantage of the newbie’s newness. (That is either a neat phrase or totally lame!) But, life is rarely ideal. For example, let’s say the protector is tasked with screening potential Dom/mes for the submissive. The most experienced Dom/me is neither all-seeing nor all-knowing. I would be more comfortable if the job of the protector were to consult with the sub regarding potential Dom/mes rather than screen them unilaterally.

This practice is just begging to be abused. After all, who is protecting the submissive from the protector? Protection can turn out to be less a teacher/student relationship than a version of “Dom/sub light.” (Of course, if this is what the sub seeks, then this is fine.) And in this situation, the Dom/me is able to take a sub off the market quickly and become the sub’s sole support system. He/she quickly becomes the sub’s de-facto Dom/me – without any responsibilities.

As with any social system, there are bound to be abuses. So, let’s give newbies a few tips that can help them choose a protector/mentor, should they decide to pick one.

Although the concept of protection is an admirable one, one should never forget that one must always be vigilant. Not paranoid, vigilant. I hope these tips will keep you on your toes and, should you seek out a protector, you will choose wisely!

This headline was featured in the September 21, 2016 New York Post —

Note that these people might very well be innocent. They are, in point of fact, innocent until proven guilty. However, even if guiltless, they face significant legal fees to beat the rap, stiff civil fines and the possibility they could spend time in jail. (Obviously, if guilty, they deserve serious prison time.)

Since we do not know the particulars of this case, let us use this unfortunate incident (for at least some of the participants) for what is often called a “teachable moment.”

I have observed three innocent BDSM-oriented situations that could lead to this kind of disaster. But it is a calamity that can easily be prevented. Let’s examine these three scenarios; afterward, I will give you an effective way to “inoculate yourself.”

2. “Hell hath no fury…” After what appears to the sub to be a bonding S&M encounter, with whips and canes, the Top never calls – or even texts — the bottom again. “I gave him/her my body to use and he/she rejects me? I’ll show him/her.” Once again, armed with serious markings, the bottom is on the warpath. Poor Top. He/she is likely sunk.

So, could these legal/police endings – in these or similar situations — have been prevented? Assuming all these scenes were consensual, the answer usually is, “Yes!”

The key is that one must have evidence that these scenes were, in fact, consensual. In the pre-camera phone days, one needed to have the submissive sign a consensuality agreement complete with driver’s license information. But now, with iPhones, it is much easier.

Simply video the bottom stating that you are all friends and everything you are planning to do – including sex if that is on the program — is completely consensual. Have her/him hold up a driver’s license and you are good to go. If the bottom refuses, then you must make your decision whether to continue on or not. That is your call; but you have no protection. (If you are playing in a dungeon, the presence of witnesses would likely make this step unnecessary. We are discussing private play here. However, if you are a heavy player with a newbie, you might want to be doubly safe and take a quick consent video.)

Legally, one cannot consent to being beaten; and there are some conservative jurisdictions that might not accept a “consent defense.” Still, an agreement such as this “visual consent form” will likely stop all proceedings in its tracks. At the very least, you will “have a leg to stand on,” in pop legalize.